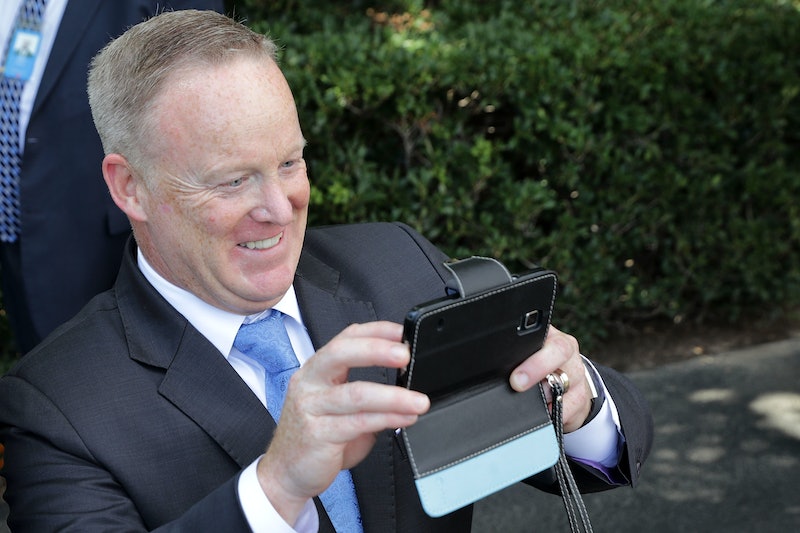 Somewhere, Sean Spicer and Reince Priebus are drinking a beer together and cackling. After a record ten days on the job, Anthony Scaramucci ("The Mooch") resigned per the president's request on Monday afternoon, prompting many to wonder: Will Sean Spicer return as press secretary, now nemesis Scaramucci's White House tenure is done and dusted?

First, a little background, since the last ten days of White House drama have felt like six months' worth of news. Spicer resigned in protest less than two weeks ago after Trump installed a new communications director, Anthony Scaramucci, when Reince Priebus failed to fill the position in a timely manner. Spicer vocally opposed the appointment of Scaramucci — his senior in the White House — and left the administration when Trump hired "The Mooch" anyway.

One week later, after Scaramucci and Priebus' very public animosity became even more public when Scaramucci called a New Yorker reporter to describe Priebus as "schizophrenic" and "neurotic" — oh, and accuse Priebus of committing a felony — former chief of staff Priebus left the White House last Friday. This exit felt less acrimonious than Spicer's, with the president praising Priebus in a tweet and both parties framing the divorce as being on good terms.

So: With Scaramucci out (a piece of information both Priebus and Spicer must be very pleased about), will Spicer return? For that matter, will Priebus?

At this point, it's just conjecture, but it would seem that ex-Homeland Security secretary and now-current chief of staff John Kelly is cracking down on Trump's former press office. Per The New York Times, Kelly was the one to insist on Scaramucci leaving the position — and bear in mind Kelly was only given the job on Friday afternoon. By Monday afternoon, he'd served less than a half-day as chief of staff. And yet, here we are!

If Kelly continues to crack down on Trump's communications office, then it feels unlikely that he'd ask any individual who played a hand in shaping it to return to his former position. On top of that, Trump is nothing if not proud, and to rescind a firing would be to admit he made a mistake. So, yeah, don't expect Spicer to show up at the White House again anytime soon.