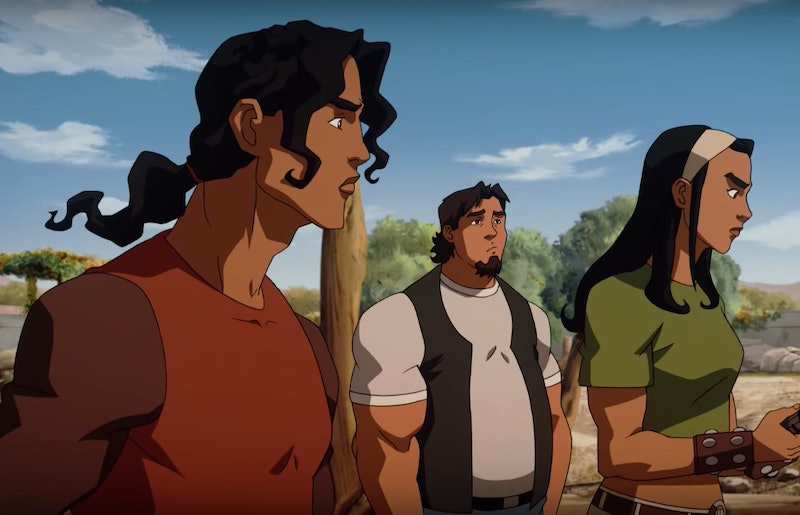 Come Thursday, Oct. 3, animation fans will have something new to geek out over: the first season of Netflix's Seis Manos, which is set in a 1970s fictional border town where three martial artists are seeking to avenge their murdered mentor. Because it's a freshman property that hasn't yet been able to build a fanbase, it's too soon to gauge whether or not Seis Manos will return for Season 2. But co-creators Brad Graeber and Álvaro Rodríguez seem eager to expand the world that they've created.

"We have scripts for a Season 2 and plans for more seasons after that," Graeber told the site Bubble Blabber. "Hopefully people will enjoy the series, and we will get to keep telling stories with these characters."

If the show is green-lit for more episodes, it likely won't be back until 2020 or even 2021. Per Deadline, Seis Manos was originally ordered in May 2018, with suggests at least a 17-month production timeline, if not longer; according to the Austin Chronicle, Seis Manos has been in development since 2016, when it was tentatively titled 6 Manos de Furia.

It's likely that Netflix will want to see how the show is received before making a Season 2 decision, but early reviews are looking good. The Book of Life animator and writer Jorge Gutierrez called Seis Manos "the Citizen Kane of Mexican anime" after watching it at an L.A. screening, Remezcla reported. Gutierrez continued, saying, "I loved it. I thought it was incredible. I think what you guys did was so brave and funny and subversive, and it's just packed with heart."

As for the plot, the trailer shows characters Isabela (Aislinn Derbez), Jesus (Overwatch voice actor Jonny Cruz), and Silencio discovering their master Chiu's (Vic Chao) body. And it's clear that whoever killed him wasn't entirely human — at least not anymore. Not only do these creatures all have the same tattoo, but their bodies are able to regenerate, which is...troubling. Fortunately, Jesus, Isabela, and Silencio are all trained in martial arts, which means, at the very least, they're not defenseless.

"Seis Manos started with kung fu heroes set against an Adolfo Constanzo type character that mixed cult and curandero [or native healer] practices with criminality," Graeber told Bubble Blabber in the aforementioned interview. "Then a bunch of historical things just fell into place in a timeline Álvaro and I were building — there was a large Chinese immigration that would fit the timeline, the DEA came into being and started meddling in Central America affairs."

And animation is the perfect vehicle to portray this fusion of Chinese, American, and Mexican cultures that's so central to the series. According to the same Deadline report, Seis Manos is the first animated series set in Mexico. "Our Mexican subscribers, and viewers in Latin America more broadly, have a tremendous passion for anime," John Derderian, Director of Japan & Anime for Netflix, told the publication.

Of course, genre diehards will tell you that Seis Manos is not technically anime, since the term only applies to shows produced in Japan. But the show is done in the same style, paying homage to projects like Fullmetal Alchemist and Attack on Titan. One of the strengths of animation is being able to marry these vastly different styles and cultures. "Anime has explored horror, martial arts fight choreography, and adult themes for a long time while animated series in the U.S. generally have not until recently," Graeber told Bubble Blabber.

With such a unique approach (and strong reviews), the future of Seis Manos looks bright.

More like this
Does 'Locke & Key’s Ending Mean There Could Be A Season 4?
By Sophia Moore
‘Squid Game’ Creator Hwang Dong-Hyuk Just Dropped A Major Season 2 Tease
By Brian Anthony Hernandez and Bustle Editors
Everything To Know About Netflix’s 'Never Have I Ever' Season 4
By Jack Irvin and Gabrielle Bondi
'Stranger Things' Season 5 Will Echo Season 1 In A Key Way, The Duffer Brothers Confirm
By Kadin Burnett and Sophie McEvoy
Get Even More From Bustle — Sign Up For The Newsletter