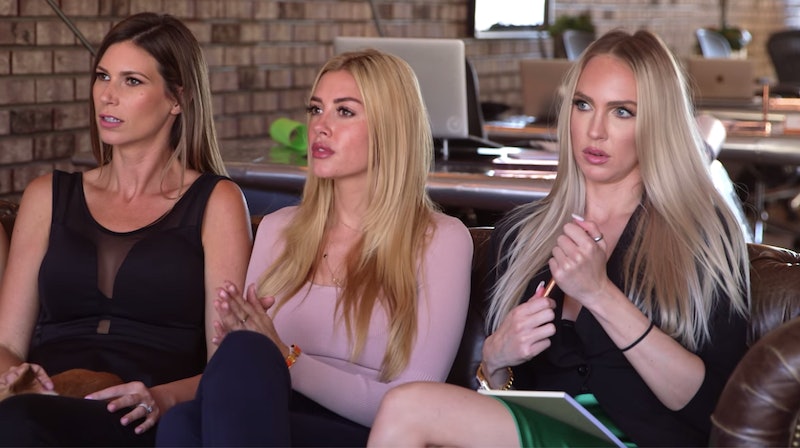 If you mixed The Real Housewives franchise with The Property Brothers, the result might be something like Netflix's Selling Sunset — a reality series that blends luxury real estate with behind-the-scenes drama. The docusoap follows twin brothers Jason and Brett Oppenheim, who own a real estate brokerage firm near the Sunset Strip, though the show is largely focused on staffers Christine Quinn, Heather Young, Davina Potratz, Maya Vander, Mary Fitzgerald, and newcomer Chrishell Hartley, among others. Essentially, it's like an addictive HGTV show, but with an added bite, and fans are understandably clamoring to know if Selling Sunset will return for Season 2.

Earlier: While Netflix hasn't made any official announcements, many of its subjects are hoping for a renewal. During a recent interview on Good Day LA, Chrishell said that, "We'll actually know really soon [whether Selling Sunset has been renewed]. I think within the next couple weeks we'll definitely know — maybe even sooner than that. So everybody tune in, everybody [marathon] the show. Fingers crossed."

And Chrishell's not the only cast member urging fans to watch Selling Sunset. According to the Express, Mary was asked by a fan on Instagram if there would be a second season of Selling Sunset, to which she responded, "We hope so!!! It's looking promising for Season 2! Netflix hasn't officially confirmed yet though...so everyone please keep watching!"

In Season 1, Selling Sunset followed its subjects as they showed expensive mansions in and around Los Angeles, including one high-profile $40 million property, which looks like it's still for sale. But because it's a docusoap, there was also plenty of interpersonal drama (the series was produced by The Hills creator Adam DiVello, after all).

Plus, while the drama is undoubtedly the most compelling part of the show, there's also a bit of star power. Not only did Season 1 feature actor Taye Diggs looking for a house, but Chrishell is married to none other than This Is Us star Justin Hartley. And having been in Days of Our Lives, All My Children, and an upcoming Lifetime movie called Staged Killer, Chrishell is a celebrity in her own right.

In fact, the Oppenheim Group often works with celebrities and other high-profile clients — so much so that their real estate agents sort of become celebrities themselves. "More and more, the real estate professional has become celebritized," Jason Oppenheim told the L.A. Times. "Clients really expect a lot. Marketing a property is not what it used to be, whether it's social media or entertainment." He went on to say that he encourages his employees volunteer at Food on Foot, a Los Angeles-based non-profit, because "it's so easy to lose perspective — we're driving around in Rolls-Royces showing $10-million homes to tech billionaires."

That said, there are still plenty of glitzy property photos on Jason's Instagram. So even if Selling Sunset doesn't come back for a second time around, fans can still browse through the cast's social media pages, see what they're up to, and find out what extravagant homes they're selling now.

This article was originally published on April 19, 2019