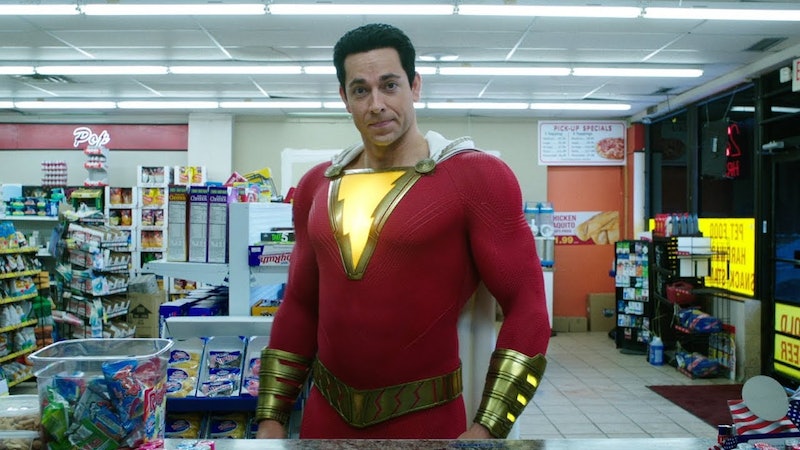 The intertwined DC Extended Universe continues to grow. Batman has met and fought Superman. The Joker met up with Harley Quinn and other DC anti-heroes in Suicide Squad. And Aquaman, Cyborg, and Wonder Woman (whose movie, let's face it, blows all the other movies away) have teamed up with Batman and a revived Superman to create the Justice League from the comics. But there's another DC character standalone movie on the horizon: Shazam!, starring Zachary Levi, opens April 5. Does that mean, however, that Shazam is a part of the Justice League?

Shazam! tells the story of an "almost" 15-year-old named Billy Batson (Asher Angel) who encounters an ancient wizard (Djimon Hounsou) who bestows his powers upon the young, unsuspecting Billy. With one simple word, "Shazam," Billy transforms into a super-powered adult (Levi). Still a kid on the inside but a strong, handsome, and powerful superhero on the outside, Billy/Shazam tries to do what he thinks a superhero would do, while still figuring out who he is and how he now fits into the world, which is a definite recipe for hilarious shenanigans. The trailer makes this combo of teen angst-meets-sudden powers look pretty hilarious. It's definitely a shift from the grittier tone of the other DCEU movies.

Still, it's definitely possible that Shazam will make his way into The Justice League. According to Entertainment Weekly, Shazam! the movie takes place in the same universe as the other DC films. In one of EW's exclusive photos, you can see a Daily Planet newspaper with the headline "Superman Is Back" tacked up to the wall behind Billy. Superman himself, Henry Cavill, was reportedly also meant to have a cameo in Shazam!, The Hollywood Reporter wrote back in September, but the deal reportedly fell through during the actor's contract renegotiations. But Shazam! producer Peter Safran also theorized in further detail, telling EW, "I wouldn’t be surprised to see Shazam play a role in the DCU. He exists in that world.”

Shazam! star Levi also seems excited by the prospect of joining The Justice League or appearing in further films with DC universe characters. "I would lose my sh*t if that happened, I would lose all of the sh*ts,” Levi told EW, remembering a moment during his final auditions when he drove by a Justice League billboard. "I remember thinking, 'If I get this and if this movie does well enough and if Justice League does well enough and they make another Justice League … maybe I’ll be on that next poster with all those guys." Levi also suggested on Twitter that there are a ton of DC Easter eggs in Shazam! that fans of the other movies should look out for.

But there's a big hitch when it comes to including Shazam in the rest of the DC Extended Eniverse, and that is the remarkably different tone that the movie seems to be destined to have. Even Warner Bros. describes Shazam! as "firmly set in the DC universe but with his own distinctly fun, family-centric tone." Can that family-friendly environment blend well with the dark approach that movies like Man of Steel, Batman Vs. Superman, Suicide Squad, and Justice League have taken? Sure, Aquaman embraced its bizarre origins and had kind of a wacky quality to it. And Wonder Woman had an aura of noble feminism rather than darkness. So they don't all have to feel the same.

One plus for the possibility that Shazam can blend with the rest of the DCEU characters and story lines is that, like the rest of them, it was given a PG-13 rating from the MPAA. Not that going PG would have negated its chances, but the PG-13 rating suggests that Shazam! still has some adult themes, despite the trailer's insistence that the movie is clearly going for a more light-hearted and humorous ambiance.

But there's also no word yet on whether or not there will even be another Justice League movie at all. As THR reported, both Safran and Wonder Woman director Patty Jenkins hope that a possible Justice League 2 is a long way off, to give their characters more time to grow on their own. Shazam might have to make an appearance in something like The Batman, Suicide Squad 2, The Flash, or Aquaman 2, which are all in the pre-production stages, if he wants to team up with other DCEU characters. Or, like Jenkins and Safran suggest, he can have a few movies all to himself. Levi might not get to share a billboard with the other heroes yet, but he could have a few of his own.

More like this
Everything You Need To Know About ‘Black Panther: Wakanda Forever’
By Bustle Editors
A New Scooby-Doo Movie Confirmed Velma Is Gay & Twitter Is Pumped
By Radhika Menon
The 50 Most Powerful Characters In The Marvel Universe, Ranked
By Johnny Brayson and Nola Pfau
Lin-Manuel Miranda & Tituss Burgess React To 'Little Mermaid' Casting Backlash
By Radhika Menon
Get Even More From Bustle — Sign Up For The Newsletter