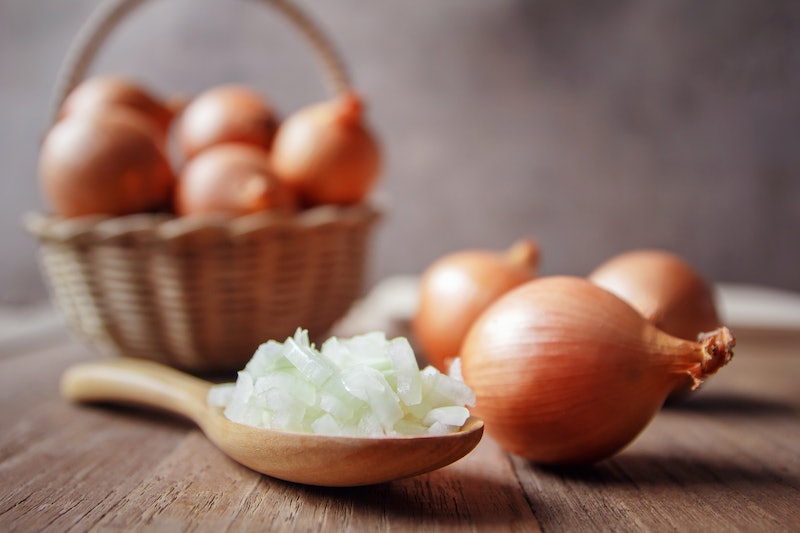 There are a lot of old wives tales that claim to get rid of colds. Most of them are quite strange — that's pretty much a prerequisite for being an old wives tale, it has to be strange. One of the strangest, however? The idea that sleeping with onions in your socks can help you get over a cold or the flu. There are a few variations of this old wives tale — some say the onions have to be in your socks, while others just require them to be in your general vicinity — but the bottom line is the same: It claims that sleeping around onions will make you feel better if you're sick.

According to the National Onion Association (no, I didn't mistype that), this folk remedy likely originated way, way, way back when in the 1500s, when people were dying left and right of the bubonic plague. Apparently, 1500s-era doctors believed that placing a whole lotta onions near people who were literally dying of the plague would somehow heal them, probably due to the antibacterial properties onions possess. (Though, I'm not fully sure that they knew what bacteria was in the 1500s?)

It's worth noting that the National Onion Association, the supreme authority on onions, calls this folk remedy "false" (which probably explains why so many people died during the Black Death despite being surrounded by onions) — but I still can't help but wonder why it's lasted this long throughout history if it's totally untrue. Is it because it's so weird? Is it an onion conspiracy?

Here's what I found out about this weird old wives tale.

Wellness site WellnessMama is into this folk remedy, and a 2018 article from StyleCraze documents a writer actually trying it. Southern Living also posited the question of whether or not an onion in a sock a day keeps the doctor away.

2. Snopes, However, Does Not Love It

However, according to myth-busting Snopes, onions really aren't that special: "There's no medical magic to placing peeled or cut onions around the home: they don't act as sponges that soak up whatever viruses or other nasty microbes are in their immediate vicinity," Snopes wrote.

3. Accounts Of It Working Might Be Due To A Placebo Effect

According to Pharmacist Hitesh Dodhia from Pharmacy Outlet UK to The Sun, the idea that putting onions in your socks while you sleep could ward off colds — along with other old wives tales that claim to heal your sniffly nose — might have survived as long as it did due to a simple placebo effect. In other words, people who try it expect it to do something, so they miraculously feel better afterwards, even if there was no actual physical change. "While some of the common health remedies have no scientific evidence to prove they work, many of them are relatively harmless. What’s more, it’s quite normal that the placebo effect associated with these methods can make people feel as though they’re improving their health."

The issue, Dodhia went on to tell The Sun, is when people use folk remedies as their main treatment, especially in the cases of life-threatening conditions. "Using unproven household remedies should never supersede advice given by a medical professional," she said, "nor should using these methods deter people from seeking the help of a pharmacist, GP or doctor."

4. It Shouldn't Replace Cold Meds As A Treatment Option

Bottom like: You should be skeptical about the miraculous properties of onions in your socks. As the Urban Legends section of About.com explained (honestly, the title of that section should be enough proof that this folk remedy is indeed nothing but an urban legend), "While it's true that eating onions has some proven health benefits, onions are not, contrary to what's claimed, 'germ magnets' capable of absorbing toxins and bacteria from the body or surrounding environment."

Verdict? If you're sick, onions are probably not a good substitute for cold meds, antibiotics, a well-balanced diet, and sleep. But, if you do want to try sleeping with onions in your socks, it won't hurt — it just might feel weird.

More like this
An Honest Review Of The TikTok-Famous WalkingPad
By Kaitlyn Wylde
Heinz Is Selling A Sprayable Mayo Mousse
By Maxine Harrison
Zosia Mamet Opens Up About Her Eating Disorder
By Zosia Mamet
Plan C Vs. Plan B: What's The Difference?
By Lexi Inks
Get Even More From Bustle — Sign Up For The Newsletter

This article was originally published on Jan. 5, 2015