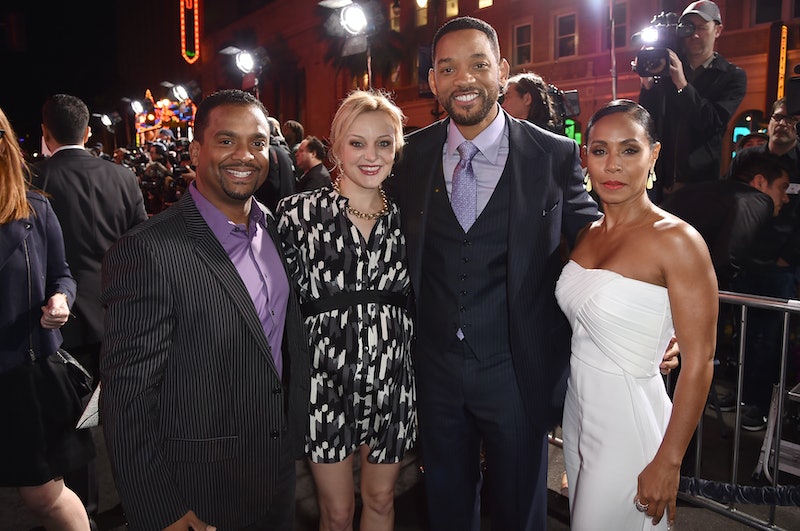 "Now this is a story all about how our lives got flipped turned upside down" — thanks to an epic Fresh Prince of Bel-Air reunion that took place over Labor Day weekend. Actors Will Smith and Alfonso Ribeiro, who played Will and Carlton Banks, respectively, on Fresh Prince during its six season run, got together to play a round of golf over the weekend, and the resulting photo is enough to make your '90s-loving heart soar.

Smith took to Instagram to capture the reunion, posting a photo of the two of them hanging out with a caption that read: "One of my favorite people on this Whole Damn Rock!!" And yes, you can practically feel the love jumping right off of the photo at you. It's hard to believe that it's been 22 years since The Fresh Prince of Bel-Air made its final bow back in 1996, but it's clear that no amount of time can take away the strong friendship that these two share with one another.

One can only hope that, at some point during their golf game, they took a little break to perform some of their world famous dance moves on the green. There's no better way to celebrate a Par-3 than by busting out the Carlton Dance, after all.

For those unfamiliar with their relationship, Smith and Ribeiro starred alongside each other on Fresh Prince playing cousins who could not be less alike. Carlton loved school, studying, and following the rules. Will, on the other hand, was charming, popular, and had a knack for breaking those very rules that Carlton held so dear. Together they made an unstoppable duo, who went from being practically strangers to the best of friends. And clearly it's something that transferred over to their personal lives, proving that art really can imitate reality.

This isn't the first time Smith and Ribeiro have reunited since Fresh Prince went off the air. A few years ago, the former colleagues teamed up to perform the now iconic "Carlton Dance" together. While appearing on The Graham Norton Show back in 2015, Smith wowed the crowd by not only rapping the Fresh Prince song, but also by bringing out Ribeiro as a surprise guest to help join in on the fun. To say that it was the best thing ever to happen in the history of things that have happened, would be an understatement.

So seeing these two actors reunite once again may not be all that surprising, but it still manages to warm your heart each and every time it happens. Will and Carlton live on through their friendship, and while this is sure to increase the public's desire to see a Fresh Prince of Bel-Air reboot happen at some point in the future (we are living in the age of TV revivals, after all), their latest golfing adventure is enough to satisfy our '90s craving — at least for now.

Let's just hope there are many more Will and Carlton hangout sessions in our future for many, many years to come.

More like this
At 28, Debra Jo Rupp Was Living A Much Different '70s Show
By Grace Wehniainen
Raven-Symoné Addressed Fan Pushback To Her Name's Actual Pronunciation
By Stephanie Topacio Long
A 'Zoey 101' Sequel Movie Is Coming
By Jake Viswanath
Man Meets Politics: ‘Boy Meets World’ Star Ben Savage Is Running For Congress
By Jake Viswanath
Get Even More From Bustle — Sign Up For The Newsletter
From hair trends to relationship advice, our daily newsletter has everything you need to sound like a person who’s on TikTok, even if you aren’t.