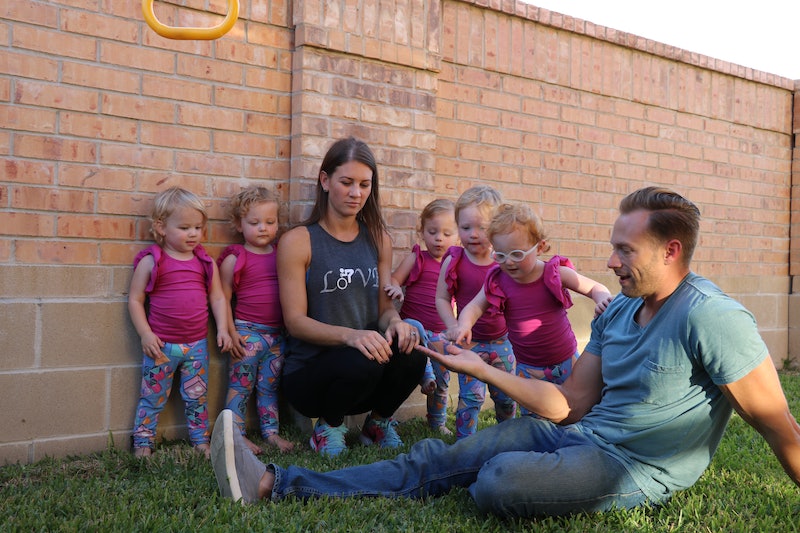 The Busbys are back — all of them! Season 3 of TLC's Outdaughtered premieres on July 10 with a special 2-hour episode. Princess Blayke is seven-years-old now, which makes the only set of all-female quintuplets in America already three! Parents Danielle and Adam, still definitely have their hands full, but with the little ones growing up so fast, are the Busbys planning on having more kids?

At the moment, neither Adam nor Danielle have come out and confirmed to the public that they want to turn their six-pack into a case or anything like that. Taking care of six children all under the age of eight is no doubt exhausting (and expensive) enough as it is. But at least the name Outdaughtered does lend itself to a little more variation in their family structure in case they do decide to add a few more kiddies to the litter. For the moment though, it looks like the Busby family is going to be restricted to just Danielle, Adam, Blayke, Ava, Olivia, Hazel, Riley, and Parker Kate.

If and when they do decide to add another Busby, though, perhaps it'll be of the four-legged variety. In Touch Weekly reported in January of this year that Adam took the girls to visit an animal shelter to play with some of the furbabies that had been displaced by Hurricane Harvey. Adam wrote on Instagram that although the family had fun playing with all the little critters, they're not in the market for bringing one home at the moment. He said:

"It’s so sad seeing the many animals displaced and affected by [H]urricane Harvey at local animal shelters. We may not be quite ready for one of our own just yet, but we were able to spend a few hours at a local shelter walking and playing with a few. The girls sure seemed to enjoy it and hopefully it was a great change of pace for the animals."

It wouldn't be too surprising if the Busbys decided to reopen their home to some new furry companions at some point, though. After all, they've had beloved pets in the past. Outdaughtered premiered in 2016, but before that, they were still chronicling their life on their own blog, It's A Buzz World. Back on Dec. 27, 2014, when Blayke was just a toddler and before the quints were even born, Danielle wrote a heartbreaking entry about putting their dog, Zoe, to sleep.

"It’s so crazy how we become so attached to our pets," she wrote. "Zoe was such a sweetheart and a gentle giant of a boxer. She loved Blayke and was Blayke’s companion from the start. We are sure going to miss her."

The family had another dog, Maggie, who unfortunately also passed away some time after Zoe. Maggie even got to feature somewhat in the family's reality TV and social media fame. On Aug. 30, 2016, Adam posted a picture of a curious little Hazel invading the healthy — and incredibly patient — Maggie's personal space as she tried to doze off on the carpet.

The next January, Adam snapped a pic of 4/5 quints trying to reach poor Maggie from underneath a door frame.

But by the time the second half of Season 2 aired in July 2017, Maggie had unfortunately passed. In Leyla Preston's summary of the season on Motherhood Diaries, she mentioned that Blayke tearfully lamented the loss of Maggie, and Adam took it as an opportunity to float the idea of getting a new dog past Danielle. "His idea to get a new dog for the family, however," Preston writes, "wasn’t very well received by Danielle, who has enough on her plate anyway! But, as a testament to her attitude, she doesn’t shoot him down, instead agreeing to talk about it at a later date."

Well, it's a later date now! Could Season 3 finally be the right time for a new puppy or rescue dog? Danielle told People that the quints are pretty much all done with diapers. Maybe it's time to start picking up someone else's poop again? If it were me, though, I'd probably suggest a betta fish or some nice sea monkeys for the time being.