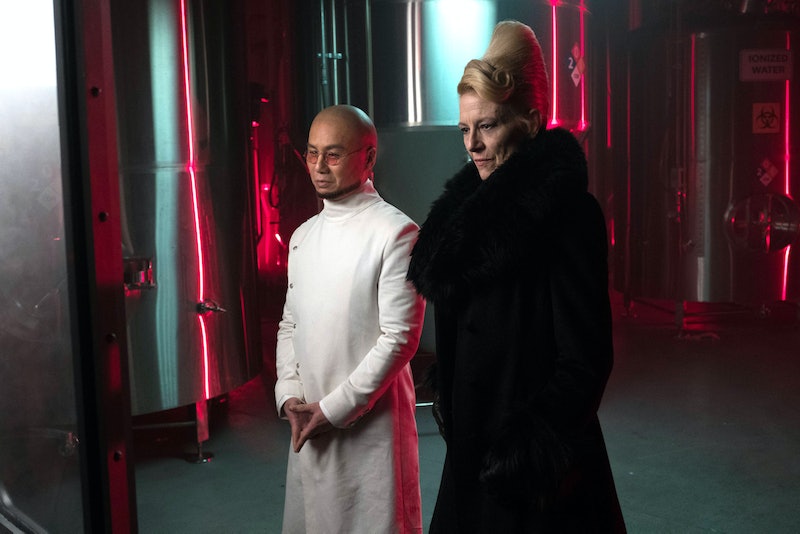 With Bruce Wayne being trained somewhere outside of Gotham City, Selina on her deathbed, and Oswald preoccupied with finding Ed, it's up to the GCPD to save Gotham from the Court of Owls. Jim, one of the Court's newest members, spends the May 15 episode trying to find out what the Court is planning — and as it turns out, Alice Tetch's virus is the secret weapon the Court plans to use in order to "cleanse" Gotham of most of its population. The Court plans to infect the entire city with a weaponized version of the virus that ran through Jervis Tetch's sister's veins, but in order to do that, they need a pretty good scientist.

So Hugo Strange reappears, still as droll and bored as ever, and he sure doesn't look like he's been staying in the woods as Fish Mooney's prisoner all season. Strange says he saved Fish from having "one foot in the grave," and it's unclear if he's talking about the first time he resurrected her or the beginning of Season 3. Strange is incredibly smart though, making sure to save his research and his virus in order to distract Jim and Harvey long enough to let him go. Somehow, Strange walks away without even being arrested by Bullock. Supervillains always manage to get a pass in this universe. It's been two seasons since Jim has successfully locked up a bad guy using police protocol.

In retrospect, perhaps Professor Strange should have created a less potent virus, because now that he's in the city again, he's going to be in the blast zone — if the Court of Owls is able to successfully launch their weaponized Alice Tetch virus at the behest of Kathryn, the Shaman, and the unnamed true leader of the Court.

But, of course, Jim is still fighting in order to stop the Court and save the city in time. If he's unsuccessful, though, it looks like the residents of Gotham City will literally tear one another apart.