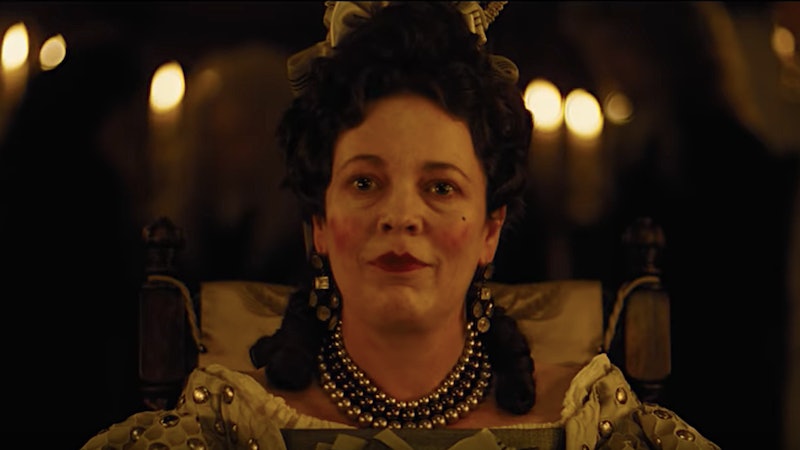 Yorgos Lanthimos' masterpiece The Favourite has been making serious waves since its cinematic release, and has gone on to take the 2019 awards season by storm. So far, the comedy-drama has picked up numerous accolades at the Golden Globes, the British Academy Film & Television Awards, and is nominated in multiple major categories at the upcoming Academy Awards. Those who haven't yet seen it may be wondering where they can do so. But will The Favourite be on Netflix UK?

There is yet to be an announcement in regards to the hit film being made available on Netflix UK, however, I have contacted the streaming service for comment and will update you with any news when it becomes available. As previously mentioned, The Favourite dominated the 2019 BAFTA awards on Sunday evening where it bagged seven awards out of a massive twelve nominations. As reported by the BBC, some of those wins included Best Actress for the film's lead, Olivia Colman, and Best Supporting Actress for Rachel Weisz, Best Original Screenplay and Outstanding British film. Commenting on the successful evening, Colman, who portrays Queen Anne in the acclaimed film, said the team were having "an amazing night" and would be enjoying drinks after the show.

Strangely enough, this is Colman's second role in which she stars as a monarch, as the Broadchurch actress will star as Queen Elizabeth in the upcoming series of The Crown. Colman will be replacing Claire Foy as the Queen in the latest Netflix series, and when speaking to the Press Association, the 45 year-old actress revealed that playing Queen Elizabeth is much harder than her role in The Favourite, because audiences have a much better idea of how the current monarch should be portrayed. She said "It could not be more different. I find the harder is Queen Elizabeth because everyone knows what she looks like, everyone knows what she sounds like, everyone has an opinion on whether the casting is right. I am loving the job, I am loving trying to play her, but I find her harder. I want to do it justice and do it well and be respectful and all of those things — and the writing is incredible so that helps."

Colman then went on to explain how anticipation surrounding The Crown has made her work on the series harder, but still very much enjoyed filming the show. She revealed "I love doing the work so much it’s almost a shame that people have to see it, because people who weren’t there get to say what they think about it, which is quite hard." According to Digital Spy, the Academy Award-nominated actress has previously revealed that she loves The Favourite so much, that she can't imagine herself getting along with anyone who might not like it — and honestly, who can blame her? This fantastic British film is currently playing in UK cinemas, whilst season three of The Crown will return to Netflix sometime in 2019. I can't wait.

More like this
The Sean Bean Intimacy Coordinator Controversy, Explained
By Sam Ramsden
Gassed Up Promises All Things Action, Risk, & Redemption
By Frances Stewart
Lewis Hamilton Turned Down A Role In 'Top Gun: Maverick' For This Surprising Reason
By Darshita Goyal
Ezra Miller Has Been Arrested Again
By Sophie McEvoy
Get The Very Best Of Bustle/UK

This article was originally published on Feb. 13, 2019