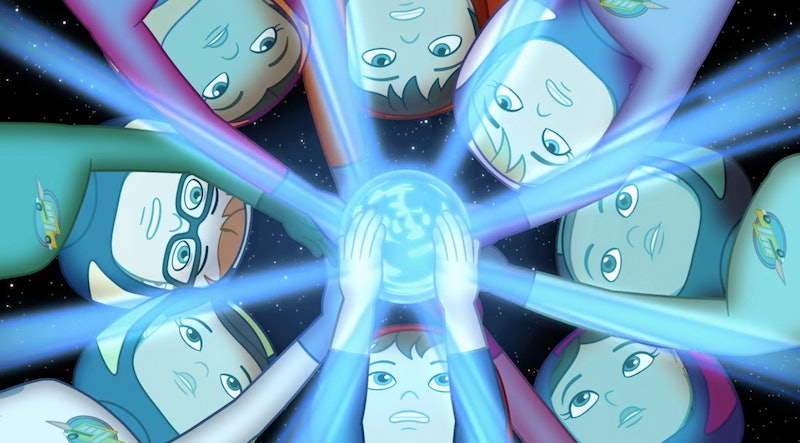 To the bus! Season 2 of The Magic School Bus Rides Again premiered on Friday, April 13 on Netflix. The reboot of the beloved '90s cartoon once again features voice acting by Saturday Night Live’s Kate McKinnon as Ms. Frizzle’s younger sister. For this re-do, Ms. Fiona Felicity Frizzle replaced the original Frizz, played by Lily Tomlin. But, even as Season 2 lands in your queue, fans may already be looking ahead to ask whether The Magic School Bus Rides Again returns for Season 3.

So far, the streaming site has announced no more episodes. But, it may simply be too early. After all, Season 2 only just dropped. And, that being said, the second season wasn't even announced until March 2018 — just a month before its release. So, there may be no new information until the fall of 2018, since Netflix has been dropping new seasons of the show about every six months. But, that's still sooner than most of Netflix's year-long waits — so that's a good sign that more could arrive shortly.

As for whether people want more — when The Magic School Bus Rides Again originally premiered on September 27, 2017, it was met with mixed reactions. The beloved franchise — both the books by Joanna Cole and the cartoon, which ran from 1994-1997 — was a fixture of many children's science educations in the '90s. For that reason, it seems that many who grew up with it feel, understandably, protective of its legacy.

The Washington Post put its graphics on blast for looking different (hey, animation has evolved a lot over the years!), while AOL.com's Jennifer Kline criticized Ms. Frizzle's "nose job." She wrote, "The face of TV's most beloved science teacher has taken on a much rounder shape, completely smoothing out the angles of her jawline," Kline said. But as Cody Schmitz for The Decider pointed out as a response to the backlash, this is show meant for children. "The Magic School Bus Rides Again succeeds if seven-year-olds love the science adventures, not if a 30-something YouTuber approves of the animation style," Schmitz wrote.

Overall, though, the show's general reception seemed to be positive. The Daily Dot gave the first season a mixed review, but ultimately said it "succeeds at what it aims to do." Kyle Ryan at The AV Club said that The Magic School Bus Rides Again did stay true to its roots. “McKinnon makes a great Frizz,” he said, “and the show boasts the original’s goofy humor and ease with making learning fun.” Ryan even mentioned that his daughter "now finds conventional teachers and school buses boring," which sounds like a success story if I've ever heard one.

Indeed, McKinnon seems like a perfect choice to play an eccentric, science-loving elementary school teacher for the 21st century, since her entire career so far has been based on spot-on impressions and kooky characters. Plus, the show commissioned Hamilton's Lin-Manuel Miranda to update the theme song, which was originally performed by Little Richard. This change-up was a stroke of genius. It's catchy, fun, and, most importantly, for kids.

As for special guest stars, cameos from last season included Will Arnett as Galapagos Gill, a park ranger the students meet in the pilot episode. Sandra Oh also made an appearance as Dr. Sarah Bellum, a roboticist from the episode "Ralphie Strikes a Nerve," according to IMDb.

All of that seems to hint at another exciting Season 2. The trailer shows the class both traveling to prehistoric times and hitching a ride on a drone, which seems like an almost poetic way to portray how much has changed since the original Magic School Bus.

But luckily, many things are still the same. Just like her sister, Ms. Fiona Felicity Frizzle has plenty of topical outfits, she announces, "Bus, do your stuff!" and Liz the Lizard even perches on her shoulder. With her at the wheel, the students — Arnold included — are in safe hands.

So whether The Magic School Bus Rides Again ends up being renewed for Season 3 or not, viewers at least have a whole second season of adventures, stealthy STEM lessons, and plenty of life lessons to learn along the way.

More like this
‘Squid Game’ Creator Hwang Dong-Hyuk Just Dropped A Major Season 2 Tease
By Brian Anthony Hernandez and Bustle Editors
Everything To Know About Netflix’s 'Never Have I Ever' Season 4
By Jack Irvin and Gabrielle Bondi
Does 'Locke & Key’s Ending Mean There Could Be A Season 4?
By Sophia Moore
Watch The Trailer For Netflix’s Edgy New Comedy 'FAKES'
By Brad Witter
Get Even More From Bustle — Sign Up For The Newsletter