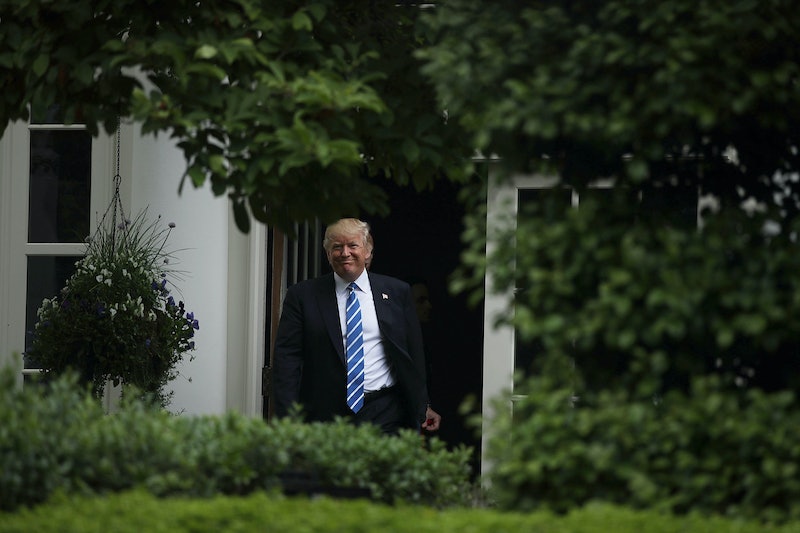 In a move that stunned politicians on both sides of the aisle, the White House officially announced on Tuesday that President Trump was firing FBI Director James Comey, specifically citing his actions during the 2016 presidential election. This decision is particularly controversial because Comey is currently leading an investigation into whether or not the Trump campaign colluded with the Russian government in an effort to sway the election — and Trump now gets to select Comey's replacement. Many are now wondering if the new FBI director will investigate Trump, or if Comey's dismissal was an effort to silence him.

After Comey was terminated on Tuesday morning and reprimanded for how he handled information regarding Hillary Clinton's private email server, he was removed from office based on the recommendations of Attorney General Jeff Sessions and Deputy Attorney General Rod Rosenstein. According to The New York Times, President Trump has already begun the search for a replacement that "restores public trust and confidence" in the nation's top law enforcement agency.

But according to some, Trump's interest in the case could be self-serving. A former senior FBI official has reportedly told NBC News that the "intent here is to replace [Comey] with someone who will close" the Justice Department investigation, and many senators are calling for an independent investigation into Russian interference to ensure objectivity. The Trump administration has suggested, however, that there's no reason for concern.

The Trump administration maintained that the decision to terminate Comey was based solely on Justice Department recommendations, citing Comey's false public claims that Clinton aide Huma Abedin sent thousands of classified emails to her husband, Anthony Weiner. But the administration's abrupt firing of Comey, a decision that was made without informing or consulting the FBI beforehand, has left many unanswered questions about what will happen to the Russia investigation that Comey was leading before being fired.

"Any attempt to stop or undermine this FBI investigation would raise grave constitutional concerns," Democratic Senator Richard J. Durbin of Illinois reportedly told colleagues on the Senate floor. "We await clarification by the White House as soon as possible as to whether this investigation will continue and whether it will have a credible lead so that we know it'll have a just outcome."

At this point, it's incredibly unclear what will happen with the investigation into Russia's alleged meddling in the presidential election, though President Trump certainly has the power to influence it given that he now has the ability to select who will lead the investigation, or who will decide to dismiss it.