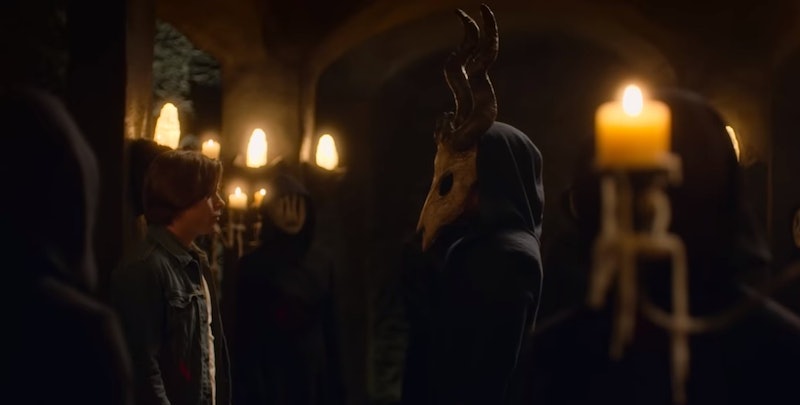 Several winter TV shows are starting to wrap up their current seasons, so now is the perfect time to start a new Netflix marathon. The streaming service's latest series, The Order, premieres March 7 and sounds like the perfect cross between a young adult mystery and supernatural fantasy: it wraps magic, werewolves, college, and a secret society all into one show. But before you get invested in its mystical world, you may want to know if The Order will return for Season 2 or if it's intended to be a one-and-done kind of project. Fortunately, none of the show's promotional materials suggests it's a limited series, so if all goes as planned, it should have a long road ahead of it.

According to Deadline, The Order stars Jake Manley as Jack Morton, a college freshman who gets more than he bargained for when he joins a secret society. As he's pulled further into its magical underbelly, he discovers truths about his family and becomes tangled in a war between werewolves and dark arts practitioners. And, of course he has a smart, attractive love interest named Alyssa because it is a young adult drama, after all.

The Order's trailer shows Jack arriving at Belgrave University for freshman orientation. He asks the tour guide Alyssa about the Hermetic Order of the Blue Rose and she tells him that it is completely "fake news." But when he arrives in his dorm room, there is a blue rose with an invitation to a secret meeting later that night, where Jack finds a secret room filled with candles and creepy hooded figures. After everyone takes off their masks, he's shocked when Alyssa is assigned to be his tutor and guide in the society.

Things take a dark turn when The Order discovers that a werewolf is killing recruits, and Jack wants to join the fight against evil forces to save lives. The clip ends with him being attacked by some kind of fanged creature before the action stops abruptly. The overall premise could be promising, though it's disheartening to see the lack of diversity in the primary cast. Surely the average college campus would have a wide variety of people who could make great recruits for a secret order, right?

Interestingly, the Netflix description says that Jack is out to avenge his mother's death. This brings up a ton of questions about Jack's past. How did he know this society existed prior to his invitation? Was his mother a member of The Order? Did she die by some magical or mysterious means and was The Order responsible for her demise? Who, exactly, does Jack want to exact revenge against? And can he actually trust any of the people around him? The answers will hopefully be resolved in the 10-episode first season and, if enough fans jump on board, other elements of this world could be explored deeper in Season 2.

Hopefully, The Order will live up to viewers' expectations with a nice dose of mystery, drama, action, emotion, and magic to come back for more.