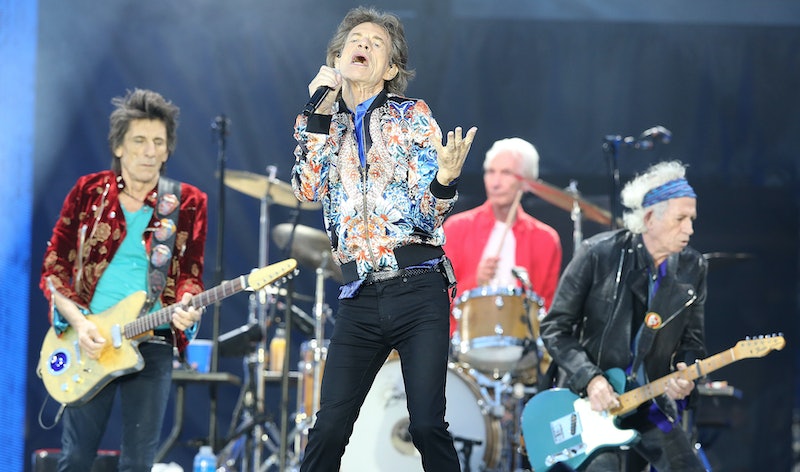 Legendary British rock band the Rolling Stones have amassed one of the biggest fanbases in the world after first forming nearly sixty years ago. Fans of the band have been treated to a live tour every year since 2012, and just last year the Stones hit the road and performed shows at venues all across the United Kingdom. But will the Rolling Stones tour the UK again?

According to Rolling Stone, the band currently only have plans to embark on a U.S. tour in 2019. Bustle have reached out for comment on any potential UK tour dates, and once more information is made available, I'll update you right away. As reported by Variety, the iconic band have toured for the past seven consecutive years, and the Stones' current world tour, titled the No Filter Tour, kicked off almost two years ago in September 2017.

Prior to the release of any tour dates, guitarist Keith Richards teased fans in a message posted on his official Twitter account. It read: "We haven’t finished yet. It’s still too early to talk about the Stones’ legacy. There’s one thing that we haven’t yet achieved and that’s to really find out how long you can do this. It’s still such a joy to play with this band that you can’t really let go of it."

As previously reported, the British group will be bringing the No Filter Tour to stadiums all across the U.S. in 2019. According to Rolling Stone, the band will kick off their American leg on April 20 at the Hard Rock Stadium in Miami Gardens, Florida, and complete their list of dates on June 21 at Soldier Field in Chicago. When discussing the upcoming U.S. live shows, Stones frontman Mick Jagger said in a statement "It’s a thrill when we play stadiums in the States," and bandmate Keith Richards added "the energy is always amazing! I’ve always loved playing the states. It’s a great crowd."

Jagger and Charlie Watts have also previously revealed that the band members each have their very own pre-show rituals to carry out before going on stage. As reported by NME, Jagger revealed "backstage before the show, I like to relax and chill out. Just before the show, I get all like, 'Ahh!' So, sometimes I like to get everybody out of the room for a minute and just calm down and do my singing," and continued "I have Bob Marley things that I kind of sometimes do and move around to. And then I do a dance warm-up: I do a couple of, like, current tunes for a dance warm-up."

As mentioned previously, the Rolling Stones embarked on a UK tour just last year, and kicked off the string of shows with two massive gigs at the London Stadium in May 2018. The band then continued their UK leg at cities including Southampton, Coventry, Manchester, Edinburgh, and Cardiff. One reviewer from NME attended the band's homecoming gig. They said: "Neon visuals lit up the crowd as Jagger shuffled, slipped and slunk his way along the boardwalk that jutted out into the audience… the Stones went from strength to strength." It sounds as if attending a Rolling Stones show should be part of everyones bucket lists, so let's hope the British legends make their way back home soon.