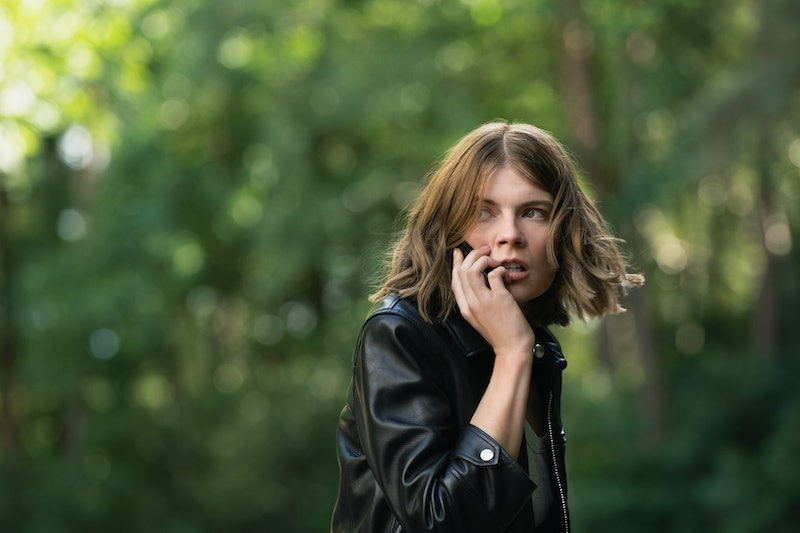 After being ordered direct-to-series by Starz all the way back in 2017, The Rook finally premiered on June 30. And now, Season 1 is already almost over. A Rook Season 2 has yet to be confirmed, but hopefully, the Aug. 18 finale isn't the end of the show.

Though the series is based on Daniel O'Malley's novel of the same name, if you've watched and read the book, you know that's one of the few things the two have in common. "They took the source material and the idea and the world and did a spinoff of that," Olivia Munn — who plays Monica, a character who barely appears in the book — told TVLine at Comic Con 2019.

Basically, the show takes the book's opening scene in which Myfanwy (pronounced like "Tiffany"), played by Emma Greenwell, awakens at Millennium Bridge in London surrounded by a circle of dead bodies —without any memory of how she got there. In fact, she has no memory at all. From there on out, the TV version almost completely diverts from the novel — so much so that Greenwell was told not to read it before shooting.

"They really loved the idea that I wouldn't know anything," she told Collider. "I thought, 'What a fantastic way to work,' so I didn't ask anything and I didn't ask for spoilers. I just let it all happen, and found it through the episodes, really, as everyone else would."

Upon her awakening, Myfanwy discovers notes that a past version of herself left, telling her not to trust anyone and that she's been betrayed and hurt. She follows a trail that leads her to discover that she works at Checquy, a British spy agency that employs EVAs, or people with special abilities.

While speaking to TVLine, Greenwell was eager to point out that EVAs aren't superheroes, they just have an extremely heightened ability that already exists in human nature. For example, Monica has superhuman strength. The season watches Myfanwy rediscover her own power while trying to find out who and what caused her to lose her memory.

"The most dangerous people are the people who have nothing to lose," Greenwell told TVLine. And Myfanwy lost everything. On one hand, it's completely terrifying and puts her into a permanent state of panic and defense — she doesn't trust anyone. On the other, it's kind of liberating, because she's free from the anxious and obsessive tendencies that controlled her and her work before. Greenwell compared it to losing everything in her iCloud upon getting a new phone: a fresh start.

In the Season 1 finale, fans will finally find out what caused Myfanwy's amnesia, which could completely open up the story in a potential Season 2. The Rook hasn't exactly been a hit with critics (it has a lowly 42% critical rating on Rotten Tomatoes), but it does have passionate fanbase (its Rotten Tomatoes audience score is 74%). Fingers crossed that's enough to land a renewal — fans waited too long for it to be over so soon.

More like this
The ‘Love, Victor’ Showrunner Gave Fans Hope For A Possible Spinoff
By Brad Witter
Legacies Showrunner Said There Is Still Hope For More Vampire Diaries
By Gretchen Smail
Here’s Who Victor Chooses In The ‘Love, Victor’ Season 3 Finale
By Brad Witter
A New Season Of The Midwich Cuckoos Could Be Coming “To A Town Near You”
By El Hunt
Get Even More From Bustle — Sign Up For The Newsletter