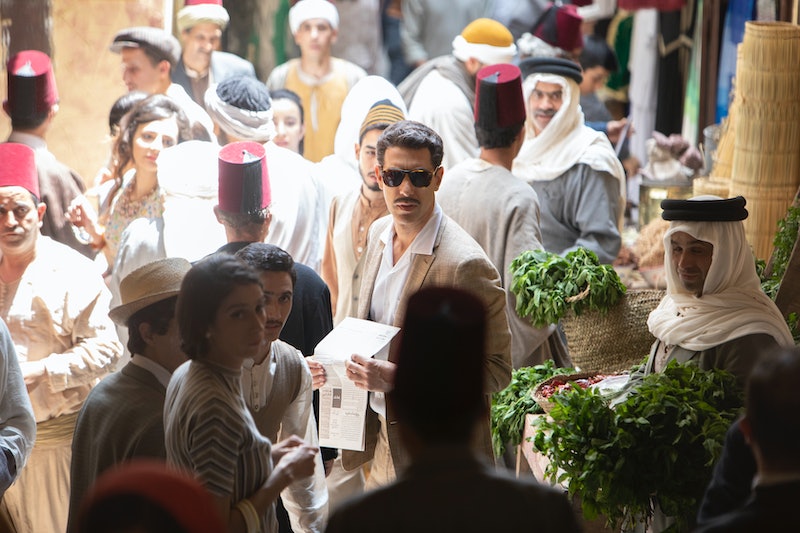 Viewers used to seeing Sacha Baron Cohen clowning around in films like Borat and TV series like Da Ali G Show and Welcome To America may be surprised to learn there's hardly a joke to be found in his latest series The Spy. However, once Cohen fans have put their expectations for the actor aside, they may find themselves hooked by The Spy's real-life tale of espionage set against the backdrop of 1960's Syria. Anyone diving into the show hoping that The Spy will return for Season 2 and become Netflix's latest long-running series may wanted to lower their expectations, considering that the real-life story of The Spy has a pretty definitive ending.

The Spy tells the story of Eli Cohen — unrelated to Sacha Baron Cohen — who was a real-life Israeli spy that infiltrated the upper echelons of Syrian's political circles, eventually becoming friends with Syrian Prime Minister Amin al-Hafez, according to the Jewish Virtual Library. The six-episode mini-series details Eli's time climbing Syrian social ladders for four years and transmitting intelligence back to Israel but, depending on how much time the series covers, will likely conclude with Eli's trial and execution after being found out by the Syrian Government.

There's always a possibility that The Spy could go the route of a show like American Crime Story and dramatize a different real-life story each season, but the intent of the first season of The Spy seems solely on bringing more intention to Eli Cohen's espionage efforts. However, fans of the series who are looking for more tales of crime and espionage rooted in Israel need to look no further than the filmography of the man who is bringing The Spy to life — Israeli filmmaker Gideon Raff.

The Spy is written and directed by Raff, whose success with the Israeli television series Prisoners Of War brought him stateside recognition when that series was adapted into the Showtime hit Homeland. After winning an Emmy for co-writing the Homeland pilot, Raff went on to co-create the FX show Tyrant and the short-lived USA series Dig, both of which were filmed primarily in Israel — although the latter had to move its production out of Jerusalem following continuous acts of violence in the area, per Variety.

Raff's interests have remained Israeli-centric, but his recent projects have been sharply focused on the efforts of the Mossad. In fact, The Spy is Raff's second Mossad-focused project this year, having premiered the Netflix Original film The Red Sea Diving Resort in July of 2019. The film, a loose dramatization of an actual Mossad spy mission to smuggle Jewish people from Ethiopia to Israel, features Chris Evans.

Raff's next project, Turn Of Mind is a feature adaptation of the Alice LaPlante novel of the same name, and a shift in pattern from Raff's more Israel-centric and political material. However, between Prisoners of War (streaming on Hulu), Homeland (streaming on Showtime), Tyrant (also on Hulu), Dig (available for purchase on digital video retailers) and The Red Sea Diving Report (streaming on Netflix), anyone who found themselves engrossed in The Spy and in search of similar tales has plenty of options to choose from.