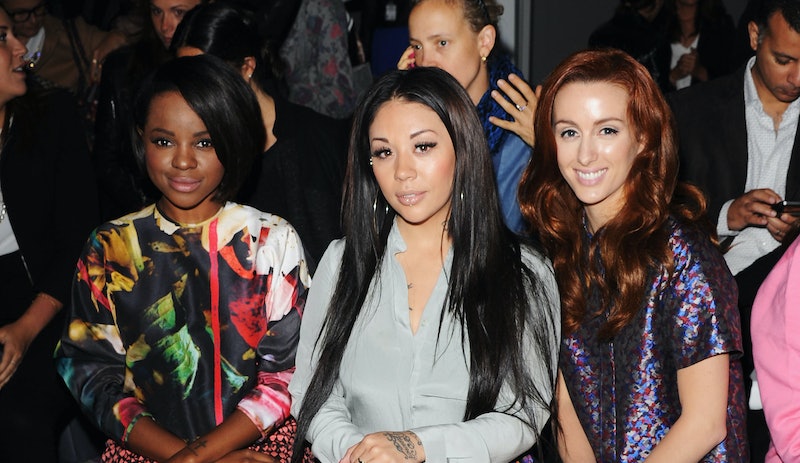 You should already know by now that the original lineup of the Sugababes have confirmed a comeback and that they will be releasing new music. Yep, thats right, the original Sugababes. Making 2019 the official year of cracking pop reunions. The three women have confirmed new music is on its way (I'm hoping songs along the lines of classics like Push The Button and Overload), but does that mean the Sugababes will go on tour in 2020, or earlier? Let's investigate.

As any millennial worth their salt will know, there have been many incarnations of the Sugababes over the years. The original members (AKA the ones coming back together in this hotly anticipated reunion) were Mutya Buena, Keisha Buchanan, and Siobhan Donaghy. Much to OG Sugababes stans disappointment, though, they all left at one point or another, making way for Heidi Range, Amelle Berrabah, and Jade Ewen to eventually take their places in 2001, 2005, and 2009, respectively.

Bustle UK have reached out to the Sugababe's publicist for comment on whether or not a tour will take place, but things are looking promising.

Back in July, Buena told The Sun "As well as the music we’ve planned a tour. We need to put it out there for everyone to see and hear us again." Could this get any more exciting?

Buena, Buchanan, and Donaghy were guests on The Graham Norton Show on Friday Oct. 18, where they confirmed that they would be releasing new music in 2020 to celebrate their 20th anniversary. Buchanan said "we’re actually working on music and we plan to put something special together for our fans." Buena kept pretty hush hush on exactly what their musical plans were, though, simply saying, "we’re gonna be working on something." The suspense is killing me.

The band's new song is Flowers, a cover of Sweet Female Attitude's original the girls worked on in collaboration with DJ Spoony.

While there is still some confusion about whether the girls will be performing under The Sugababes or the name they adopted when they reformed briefly back in 2012, MKS, one thing's for sure: Flowers does not disappoint, and this means the tour won't either.

More like this
This 'Emily In Paris' x Blackpink Crossover Is Beyond Iconic
By El Hunt
The Spice Girls Are Set To Reunite At King Charles III’s Coronation
By Sam Ramsden
Rita Ora Finally Opened Up About Marrying Taika Waititi & Their "Perfect" Wedding
By Sophie McEvoy and Catharina Cheung
You’ll Definitely Recognise Isadóra Bjarkardóttir Barney’s Mum
By Maxine Harrison
Get The Very Best Of Bustle/UK
Sign up for Bustle UK's twice-weekly newsletter, featuring the latest must-watch TV, moving personal stories, and expert advice on the hottest viral buys.