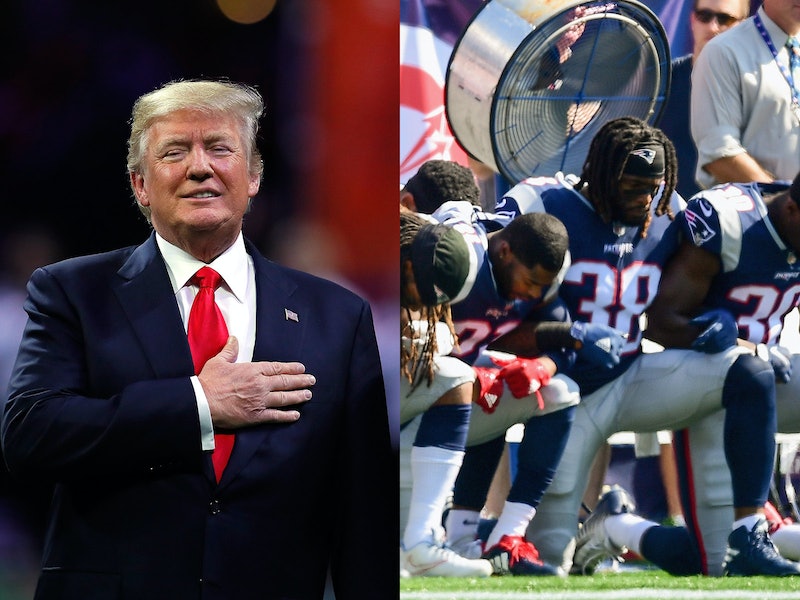 More than 100 million people are expected to tune in Sunday night to watch the 2018 Super Bowl, and advertisers are betting that few of them want to hear about politics. But after a year in which the NFL itself became the epicenter of America's culture wars, and with political divisiveness at an all-time high, it could be hard for Sunday night's game to go down without a partisan fight. From the ads to the halftime performance to President Trump's own role in the big day, there are plenty of opportunities for some Monday morning quarterbacking.

It's become a tradition for the occupant of the Oval Office to to sit for an interview with the network that's hosting the big game. President George W. Bush started the trend in 2004, and President Obama did the interview every year of his presidency. But Trump turned down this year's interview with NBC News, despite having done last year's with Bill O'Reilly, who was still with Fox News at the time. NBC News is reportedly leaving the door open to the president, but it looks like Trump's already made up his mind.

It seems the president has a clear favorite in Sunday's Super Bowl matchup, too. Eagles owner Jeffrey Lurie was not among the seven NFL owners who sent $1 million checks to Trump's inaugural committee. But during a campaign rally, Trump once read aloud from a letter the Patriots' head coach, Bill Belichick, wrote encouraging him. Quarterback Tom Brady owns at least one "Make America Great Again" hat, although he may have grown more distant from the president in recent months. And Patriots owner Robert Kraft reportedly called Trump to voice his support for the new tax law, despite disagreeing with Trump's criticism of athletes protesting the national anthem.

To Stand Or To Kneel? The National Anthem Controversy

In a callback to last fall's uproar over his attack on NFL athletes who knelt during the national anthem to protest police brutality, Trump recounted the story of Preston Sharp, an 11-year-old boy who honored the lives of veterans by placing flags and flowers on their graves, during Tuesday's State of the Union. Then he said:

Preston's reverence for those who have served our nation reminds us of why we salute our flag, why we put our hands on our hearts for the pledge of allegiance, and why we proudly stand for the national anthem.

That line was far less pointed than the one Trump delivered at a campaign rally for Arizona Senate candidate Luther Strange last year: “Wouldn’t you love to see one of these NFL owners, when somebody disrespects our flag, to say, ‘Get that son of a b*tch off the field right now, out. He’s fired. He’s fired!’" The applause line was an apparent reference to former San Francisco 49ers quarterback Colin Kaepernick, who began the movement. Trump's words kicked off weeks of heightened controversy as some additional players took a knee, others locked arms, and some entire teams even stayed in the locker rooms during the national anthem. It also stirred tension between players and team owners.

NBC reportedly has a plan to cover athletes who kneel during the anthem this year, saying that those players “will be shown live" and identified. "We would probably try to, in a very concise manner, mention why it is this person is kneeling or why they’re kneeling and then get on with the game," Fred Gaudelli, the executive producer of NBC’s Sunday Night Football, said last month.

To that end, the NFL blocked a inflammatory ad from appearing in this year's Super Bowl program. The veteran's group Amvets sought to place an advertisement with the message "#PleaseStand," to mount public criticism toward the athletes. The NFL rejected that ad, saying that a placing a political statement in the program would not be appropriate. The program will include an ad on supporting veterans from the group Veterans of Foreign Wars, however, and the NFL will celebrate members of the military during the game as usual.

"The NFL desperately wants the focus to be on the football game and all of the hoopla, and the NFL wants to stay as far way from all of the protests and all of the political issues as possible," Tim Calkins, a marketing professor at Northwestern University's Kellogg School of Management, tells Bustle. "For the advertisers, one of the worst things that could happen is that everybody talks about what the players are doing, whether they're protesting or whether they're not protesting. ... So everybody involved in putting on the Super Bowl is hoping that politics does not become a real focus this year."

After 2017, Politics Are Taboo For Advertisers

The league may also be keeping an eye on its own bottom line. Ratings for NFL games fell by nearly 10 percent during the regular season. Television executives have chalked this up to an increasing variety of unconventional ways consumers are watching games, like streaming to mobile phones and tablets. But Trump directly tied the decline in viewership to the controversy he stirred up:

Big money is most visibly tied to the Super Bowl through advertisements, which this year cost $5 million on average for a 30-second spot. Advertisers and marketing experts say that for many, this year's goal is not to touch the third rail of politics during commercial breaks. The ads are expected to focus on humor, celebrities, and corporate social responsibility instead.

"Only between 6 and 7 percent of them over the last 10 years have used some type of social or political type of message," Charles R. Taylor, a marketing professor at the Villanova School of Business, tells Bustle. "If you contrast that, about half of them use humor. But last year, a limited number of ads that touched on politics or potentially political messages got a lot of publicity."

Last year, a commercial by Anheuser-Busch InBev stepped squarely into the immigration debate (the spot actually was filmed in October 2016, a month before Trump became president). The 2017 Super Bowl ad for Budweiser showed one of the company's co-founders being heckled by Americans when he first arrived as an immigrant from Germany in 1857.

Around the time of last year's Super Bowl, the Trump administration's proposed ban on travel to the U.S. by residents of majority-Muslim nations deeply divided the American public. This year, immigration issues, especially the fate of the nearly 800,000 Dreamers who were brought to the United States as children, are firing up both liberals and conservatives again. A new plan proposed by the White House would allow Dreamers to stay in the country while sharply cutting legal immigration. The plan is unpopular with influential leaders in both parties.

Navigating ads that focus on such political issues can be tricky for advertisers because "they can be interpreted with a certain bias," says Paul Pavlou, a dean in the Fox School of Business at Temple University. Perhaps that's why this year's Budweiser ad goes in a decidedly different direction. It shows brewery workers delivering water to disaster-stricken parts of the country, shining a light on the everyday heroes who came to their fellow citizens' aid during last year's spate of deadly hurricanes in the southern states.

An ad by Stella Artois follows a similar theme. In it, Matt Damon highlights the company's efforts to provide people around the world with access to clean water. "If just 1 percent of you watching this buys one," Damon says, holding a glass of Stella, "we can give clean water to 1 million people for five years."

"So far, all of the ads are remarkably safe," Calkins says. "Nobody so far has [released] an ad that is at all polarizing in a political sense."

#MeToo Could Make A Big Play On Game Day

With the national conversation around the #MeToo movement hitting a fever pitch this awards season (which coincides with the Super Bowl), experts say advertisers would be smart to gear their ads toward women's empowerment and equality. Roughly half of the Super Bowl audience is made up of women, and advertisers have moved away from sexualized, male-focused ads over the last decade.

"I'd be surprised if we see sexual appeals in this year's Super Bowl. It's only about 6 percent of the Super Bowl ads over the last 10 years, but this is a particularly bad time to do that," Taylor says. "This would be a good year for the advertiser to feature more women in the ads, [but] it's looking like it's going to be roughly the same ratio."

One standout ad from last year's Super Bowl told the story of a dad's hopes for his daughter, ending with a message on screen that says, “Audi of America is committed to equal pay for equal work.”

But even that ad proved problematic. In the week after the 2017 Super Bowl, negative comments about the ad outnumbered positive ones 18 to one. According to The Wall Street Journal, some viewers slammed it as “100% liberal trash propaganda”﻿ and “anti-male propaganda" while others called out apparent hypocrisy at Audi, where the leadership team at the time skewed heavily male.

The controversy over the treatment of women even touches this year's halftime performance. Justin Timberlake will take the stage during the halftime show, but not without the shadow of the drama surrounding the infamous "wardrobe malfunction" during the 2004 Super Bowl. During that performance, Timberlake tore off a piece of Janet Jackson's top, revealing her nipple on live TV. The blame widely fell on Jackson. And as both of them continued to perform over the next decade-plus, Vox writes: "Janet Jackson’s career was damaged. But Timberlake’s ultimately thrived."

The moment marked one of the most memorable Super Bowl halftime shows in history, a short list that includes Beyoncé's show-stopping performance of "Formation" during Coldplay's act in 2016. Through a performance that invoked the Black Lives Matter Movement, the Black Panthers, and Malcolm X, Beyoncé set a new standard for political activism on the Super Bowl stage and in her own career.

"The political issues in our country are so intense and they really are sort of sitting right there," Calkins says, reflecting on the opportunities for politics to enter the show, from the halftime performance to the advertisements. "The question is, will any of [them] want to go there, and will they find a way to do it in a way that's acceptable to NBC and the NFL."