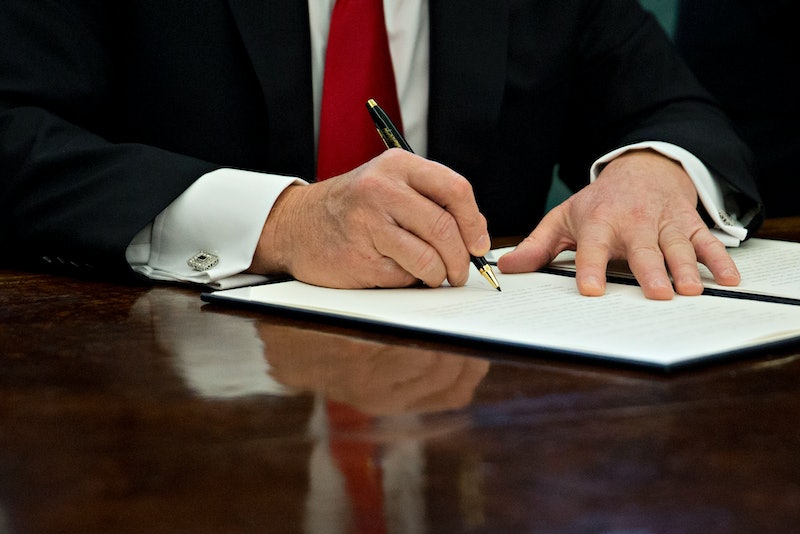 There's a startling question, one that immigration lawyers are reportedly mulling in the aftermath of President Donald Trump's executive order on immigration and refugees: did the Trump administration also effectively hobble international tourism? It's far too early to arrive at a conclusive answer, because the practical implications won't be known until it's clearer how the order will be interpreted. But as Danny Vinik detailed for POLITICO, it's being viewed as yet another potentially calamitous effect of what's been widely criticized as a slapdash, disorganized, and chaotic couple of weeks for the new administration.

According to Vinik's report, former Obama administration chief counsel for U.S. Citizenship and Immigration Services Stephen Legomsky believes that if the provision in the executive order is interpreted as broadly as it theoretically could be, it could hamper the ability of international tourists to enter the country, as well.

The headline-grabbing aspects of Trump's order have undoubtedly been the refugee and immigration bans, with entrance into the United States from six Muslim majority countries ― Iran, Iraq, Yemen, Somalia, Libya, and Sudan ― having been blocked temporarily, and refugees from Syria having been barred indefinitely. The order was halted on Friday, Feb. 3 by a federal judge, and the administration has filed an emergency appeal to try to restore it. Trump himself has also attacked the judge on Twitter.

Here's the relevant passage from Trump's order ― apologies in advance, as it's pretty technical language, and might sound somewhat obtuse.

The Secretary of State, the Secretary of Homeland Security, the Director of National Intelligence, and the Director of the Federal Bureau of Investigation shall implement a program, as part of the adjudication process for immigration benefits, to identify individuals seeking to enter the United States on a fraudulent basis with the intent to cause harm, or who are at risk of causing harm subsequent to their admission. This program will include the development of a uniform screening standard and procedure, such as in-person interviews; a database of identity documents proffered by applicants to ensure that duplicate documents are not used by multiple applicants; amended application forms that include questions aimed at identifying fraudulent answers and malicious intent; a mechanism to ensure that the applicant is who the applicant claims to be; a process to evaluate the applicant's likelihood of becoming a positively contributing member of society and the applicant's ability to make contributions to the national interest; and a mechanism to assess whether or not the applicant has the intent to commit criminal or terrorist acts after entering the United States.

The upshot is that the portion of the order referring to "immigration benefits" theoretically doesn't just refer to people looking to permanently reside in the United States, but could include lesser benefits that nonetheless fall under that umbrella ― like, for example, a tourism visa. Because the provision above doesn't stipulate that the "uniform standard" only applies to people from the seven countries the order has initially targeted, the broadest interpretation could be read as meaning that all foreigners entering the United States via a tourism visa would be subject to a series of in-person interviews, background checks, and demands for extensive documentation.

Of course, there's no reason to assume that this is how it'll be interpreted, and for the time being, it's unclear if Trump's order will even stand up in court. There have already been multiple rulings against it, which has spurred an outraged reaction from the 70-year-old commander-in-chief, who tweeted on Saturday "what is our country coming to when a judge can halt a Homeland Security travel ban and anyone, even with bad intentions, can come into U.S.?"

Soon enough, he'll find out whether or not his ban will stand up in court. And only after that will the nation realize what the ban's full impact on tourism could be.