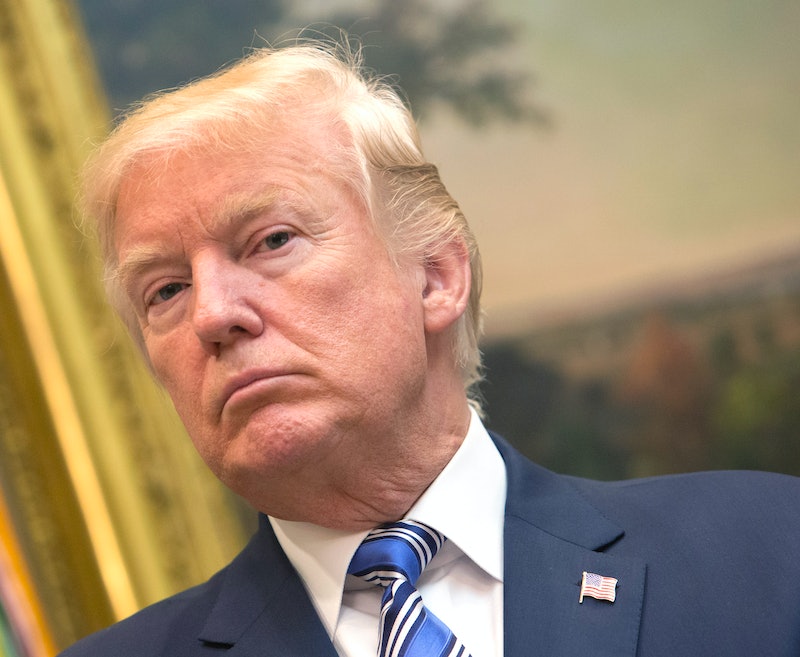 On Friday morning, President Donald Trump took to Twitter to make yet another forceful threat against North Korea. He tweeted that "[U.S.] military solutions are now fully in place, locked and loaded, should North Korea act unwisely." Given the tenuousness of the situation, amplified by American intelligence sources claiming North Korea can now theoretically reach the U.S. with nuclear-equipped missiles, it's not hard to see why a lot of people are concerned: Will we go to war with North Korea? Is yet another harrowing war looming on the horizon?

The truly responsible answer is that it's still too early to judge, and given the apparent unpredictability of Trump's public statements, and the often sharp divide between those statements and his actions, it may never be clear it's actually going to happen until right before it does. As evidenced in part by Trump's abrupt Twitter statement claiming he'd banned transgender soldiers from serving in the U.S. armed forces, a statement he seemingly never moved to enact through any official channels (and one which has so far been ignored by the military), it's clear that his social media declarations don't always stack up to concrete action.

There are good reasons to doubt that a full-on war will actually happen, however, barring some sort of erratic or disastrously impulsive tweet or decision by Trump himself ― not an ideal situation, but you can only play the cards you've been dealt, right?

In simple terms, thanks to North Korea's status as a nuclear-armed state, and its close proximity to longtime American allies like South Korea and Japan, the potential costs of launching a military invasion of the isolated authoritarian nations are hard to overstate.

Were North Korea to deploy its nuclear weapons on the United States or its nearby allies, it would be virtually signing a contract for its own destruction ― there's little doubt, from a strategic perspective, that this would result in a retaliatory nuclear strike, one which would decimate the North Korean government and likely kill a staggeringly awful number of civilians. As dire a thought as that may be, however, it means that assuming any hint of rational self-interest on the part of North Korean leadership, actually using its nuclear arsenal makes no sense.

Similarly, the United States striking first in a military fashion would likely give North Korea more theoretical reasons to use the weapons, meaning that if nuclear deterrence is the goal, it likely wouldn't be advanced by a military engagement.

One promising sign is that, according to AP, diplomatic negotiators have been quietly in touch in recent days, raising the possibility that all the public bluster and saber-rattling is being more soberly talked-out behind closed doors.

Of course, this depends on whether Trump can show the same restraint about the use of nuclear weapons that every other president since Harry Truman has had ― avoiding their use has been a guiding principle of U.S. statecraft for decades, since the bombings of Hiroshima and Nagasaki in World War II. And uncomfortable though it may be, it must be noted that as a candidate Trump showed a decidedly concerning willingness to entertain the use of nukes.