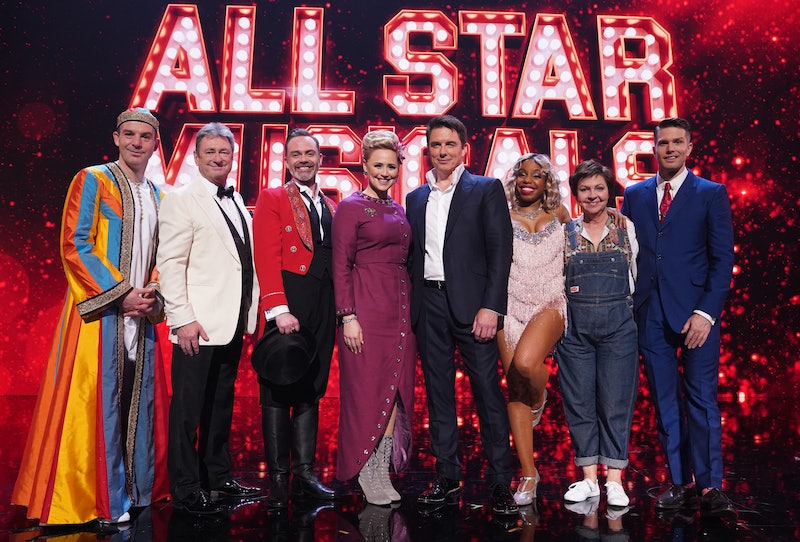 Dancing On Ice may have only finished a week ago, but thanks to ITV's spectacular All Star Musicals I was fully prepared to dedicate my Sunday nights to all things theatrical. Sadly it turns out that this show was an ITV special rather than a series, which is disappointing to say the least. I was so looking forward to see more groups of celebrities challenge themselves with renditions of classic theatrical performances for more than just one night. So will there be another All Stars Musicals, or am I just being a little too hopeful?

A return actually looks pretty promising, considering that this wasn't the first time All Stars Musicals captivated the nation. Hosted by Freddie Flintoff, the first All Stars Musicals aired in 2017 and featured the likes of Denise Lewis, Sally Phillips, Nicky Campbell, and Sir Tony Robinson who went through the same process of this year's contestants to perform in front of an audience at the London Palladium, all the while guided by the legend that is Michael Crawford.

I don't want to get your hopes up too soon with that bit of info so I reached out to a representative for ITV for comment. I've yet to receive a reply, but I'll keep you posted if anything comes up. However, given that the show returned this year it seems fair to assume that there could well be another show next year or the year after, although perhaps not a full series anytime soon.

This time around, the second instalment showcased the musical talent of some unlikely faces, including Alan Titchmarsh, Martin Lewis, Joel Dommett, London Hughes, Tessa Peake Jones, Daniel Brocklebank, and Amy Walsh. The host and mentor were also changed this year, with the ITV special being hosted by John Barrowman who is no stranger to the world of musical theatre, previously starring in Anything Goes, The Phantom of the Opera, and Miss Saigon as Radio Times reports. The iconic Elaine Page (who starred in Cats, Evita, and Chess) took over Crawford's role in guiding the celebs through their musical training, and also lead the judging panel where she was joined by actor Kristin Chenoweth, Strictly pro Kevin Clifton, and stage star Trevor Dion Nicholas.

And while the panel is there to give their opinions and critiques on the celebs performances, it's ultimately down to the theatre audience to choose which "wowed them the most, ITV said in a statement. Daniel Brocklebank certainly "wowed" the audience and viewers at home, so much so that he was chosen as the winner for his rendition of The Greatest Showman.

His victory and the rest of the contestant's performances spurred Twitter users to call for another instalment of the show immediately, with one user suggesting that it should be done in weekly instalments in the style of Dancing on Ice. ITV, you need to get on this ASAP.

I don't know about you, but I don't think viewers will be able to wait over a year for the next All Stars Musicals. Although judging by the reception that last night's special ignited, I have a feeling that ITV will deffo turn this format into a series. I mean, they'd be silly not to IMO.