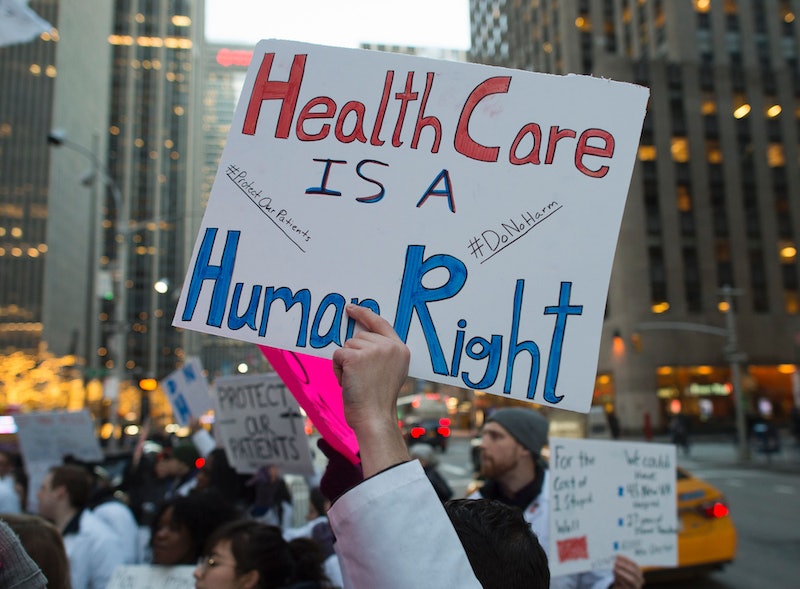 On Friday, the Trump administration significantly rolled back Obamacare's contraception mandate, with the Health and Human Services Department giving certain employers the green light to exclude birth control coverage from company health plans. Shortly thereafter, the American Civil Liberties Union sued the Trump administration over the birth control order — and in all likelihood, they won't be the only ones doing so.

Under the new HHS rules, employers will be able to obtain an exemption from Obamacare's contraception mandate, which requires businesses to provide contraception coverage in employee health insurance plans, under one of two conditions. Businesses that cite a "sincerely-held religious" objection to contraception will be able to opt-out of the mandate, and so will businesses that oppose birth control "on the basis of moral conviction which is not based in any particular religious belief." The new rules go into effect immediately.

Later in the day, the ACLU filed a lawsuit against the administration in San Francisco federal court seeking to block the new rules, with an attorney for the organization calling them "blatantly unconstitutional" policies that "violate the separation of church and state.

"The Trump Administration is forcing women to pay for their boss's religious beliefs," ACLU senior staff attorney Brigitte Amiri said in a press release. "We're filing this lawsuit because the federal government cannot authorize discrimination against women in the name of religion or otherwise."

This isn't the first time the ACLU has sued the Trump administration — the organization played a bog role in the legal fight surrounding Trump's many travel bans — and it probably won't be the last. In addition, this won't be the only lawsuit challenging the new contraception policy, as Massachusetts Attorney General Maura Healy announced Friday that she, too, will sue the Trump administration over the move.

"The Trump administration's actions today are a direct attack on women's health and the right to access affordable and reliable contraception," Healy said in a statement. "I will be suing the Trump administration today to stop this rule and defend critical protections for millions of women in Massachusetts and across the country."

The ACLU filed its lawsuit on behalf of the Service Employee International Union-United Health Care Workers West, which also blasted the administration's decision.

“With the stroke of a pen, the Trump administration has shamelessly attempted to rip away the rights of untold numbers of women to receive essential healthcare, under the warped facade of ‘religious freedom,’" SEIU-UHW President Dave Regan said in a press release. "Apparently, ‘religious freedom’ to this administration is the freedom to allow bosses to make medical decisions for and discriminate against female employees. Women in the workplace need compassionate care, not doors slammed in their faces by their employers."

The Affordable Care Act's contraception mandate was subject to many lawsuits during the Obama administration. Hobby Lobby and other religious businesses sued over the policy, arguing that providing contraception to their workers violated their religious beliefs. When the Supreme Court ruled in favor of those business, the Obama administration proposed a workaround wherein employees of religious organizations could receive contraception without the involvement of their employers. But Catholic groups sued over this compromise policy as well, and that case was in legal limbo when Trump unveiled the new guidelines Friday.

The share of female workers in the U.S. who pay for their birth control dropped from 21 percent to under four percent after Obamacare's contraception mandate went into effect, according to the Kaiser Family Foundation, and the National Women's Law Center determined that American women saved $1.4 billion on birth control pills in 2013 alone thanks to the policy. It's too soon to say how many women will be affected by the Trump administration's decision.