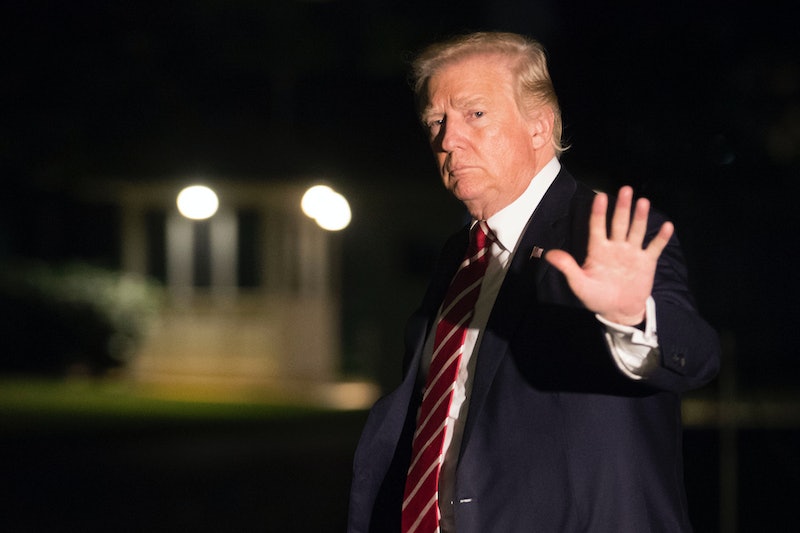 The Iran deal has been hailed by its supporters as a landmark agreement that serves to advance nuclear nonproliferation. In the two years since the agreement was met, Iran has reportedly kept up with its end of the bargain, and as such, the United States has not reimposed economic sanctions. But President Donald Trump has long spoken out against the deal, and according to multiple reports, he is expected to decertify it. Whether or not Trump will end the Iran Nuclear deal in its totality, however, is dependent on how both he and Congress choose to proceed.

Every 90 days, the President of the United States must "certify" whether Iran is following the parameters set out in the agreement, formally known as the Joint Comprehensive Plan of Action (JCPOA). Thus far, Trump has complied and certified. But as the next deadline for certification approaches on Oct. 15, Reuters reported President Trump is expected to choose to decertify.

The deal was officially reached in July 2015, adopted in October 2015, and then enacted and implemented in January 2016. It was the result of nearly two years of negotiations.

If Trump decertifies the deal, it wouldn't end the agreement. What it would do is give Congress a 60-day window to enact sanctions against Iran. Sanctions can come in many forms, such as economic embargoes, the reduction of diplomatic ties, or even bans on competing internationally in sporting competitions. With Iran, economic sanctions take the fore. In the past, economic sanctions imposed on the country have greatly harmed its economy.

But if Trump were to decertify the deal, this wouldn't immediately guarantee the implementation of sanctions either. In fact, The Hill reported that Trump may decide to decertify the deal and then proceed to discourage Congress from reinstating sanctions. A simple majority would be required in the Senate, but how the votes would be cast is currently unclear.

Furthermore, the decision would not immediately affect the agreement as it stands among the United States, France, Russia, China, the United Kingdom, and the European Union. However, if Congress were to vote to impose sanctions, it would effectively signal that the United States isn't wholly abiding anymore. Additionally, the multilateral agreement could completely unravel if Iran chooses to entirely walk away from the international deal as a result.

"I believe that they fundamentally are," he said. "There have been certainly some areas where they were not temporarily in that regard, but overall our intelligence community believes that they have been compliant and the IAEA also says so." IEA stands for International Atomic Energy Agency.

President Trump has been an outspoken opponent of the Iran deal for years. Most opponents take issue with the agreement because it allows for a small amount of uranium enrichment. Under the deal, Iran is required to reduce its uranium enrichment by nearly 97 percent, slash its supply of centrifuges, and submit itself to a series of ongoing inspections by the IEAE. It is allowed to continue enriching some uranium under the premise that it is doing so for peaceful purposes. This is where critics say the deal falls short, because by allowing for some enrichment, Iran's nuclear program is effectively being legally codified.

They also take issue with the fact that the restrictions, as they sit, are not permanent. The Hill explained that in 2030 the restriction on uranium enrichment lifts, caps on stored low-enriched uranium expires in 2028, and as soon as 2025, Iran will no longer be limited to operating a single enrichment facility. No one knows for sure what will happen when the deal expires, if it lasts until then. In theory, the deal prevents Iran from being able to rapidly assemble a nuclear weapon in the near future. But as soon as 2025, they would be able to speed up.

Back in 2015, President Obama argued that, at the very least, the deal provided the international community at least a decade to learn more and make new decisions. President Trump has one week to make an announcement about his decision.