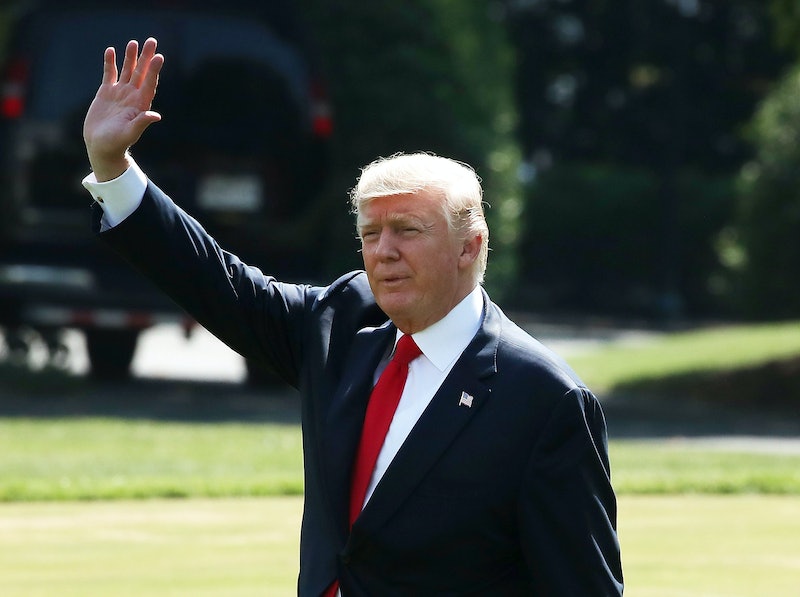 On Tuesday, President Trump made perhaps his most fervent condemnation of North Korea to date. The president spoke to reporters shortly after reports surfaced on Tuesday that North Korea may have developed a miniaturized nuclear warhead. Despite promising "fire and fury," the president's words did not give many specifics, leaving it unclear if Trump would use nuclear weapons on North Korea.

Trump's comments came soon after The Washington Post reported that U.S. analysts concluded last month that North Korea has now produced a nuclear warhead that can fit inside its missiles. According to the Post, at least some U.S. intelligence sources believe that North Korea now controls some 60 nuclear weapons, as the nuclear program in the recluse nation has reportedly progressed faster than many experts expected. Meanwhile, CNN reported on Tuesday that North Korea's miniaturized nuclear warhead may have yet to be tested.

As the North Korean nuclear program has progressed, Trump has become known for his varying responses. After North Korea tested an intercontinental ballistic missile in July, Trump tweeted, "Does this guy have anything better to do with his life?" about the North Korean leader, Kim Jong Un. In April, the president threatened North Korea with an "armada," but the ships never actually changed course. Now, all eyes will be on President Trump's follow-through.

Vowing to use power "this world has never seen before," seems to imply a nuclear threat. After all, Trump in April authorized the military to drop the largest non-nuclear bomb the U.S. has ever used. The so-called "mother of all bombs" fell over an ISIS target in Afghanistan. Still, it's entirely possible the president envisions a different use of force altogether — his statement on Tuesday did not go into any specific details.

Coincidentally, Trump's fiery language may give Americans pause this time of year. It was on August 6 and August 9, respectively of 1945 when the U.S. dropped two atomic bombs on the Japanese cities of Hiroshima and Nagasaki.

Ahead of the somber anniversary, Japanese Prime Minister Shinzo Abe called for "a world free of nuclear weapons." Trump's next move will undoubtedly be viewed in the context of history.

More like this
Eurovision Has Been Given A Whole New Look Ahead Of Its Liverpool Debut
By Bustle UK
This Is When Netflix Is Going To Start Charging You For Sharing Passwords
By Darshita Goyal
6 Organizations Fighting Police Brutality That You Can Support Right Now
By Syeda Khaula Saad and JR Thorpe
TikTok Is Raving About Primark’s Affordable North Face “Dupe"
By Sam Ramsden
Get Even More From Bustle — Sign Up For The Newsletter
From hair trends to relationship advice, our daily newsletter has everything you need to sound like a person who’s on TikTok, even if you aren’t.