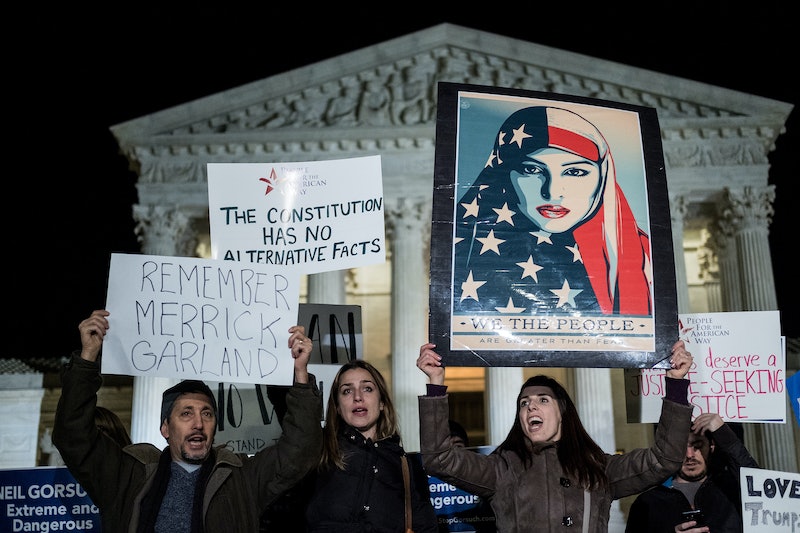 The back-and-forth saga of Trump's executive order on immigration continues more than a week after he signed it. On Tuesday, the 9th Circuit Court of Appeals will hear arguments for and against the implementation of the order. Critics of it have argued that the executive order is a prime example of executive branch overreach and is unconstitutional. But could this executive order go to the Supreme Court? It's definitely plausible that it could end up before the highest court in the land.

On Jan, 27, Trump signed the executive order placing a temporary ban of 90 days on travelers from seven majority-Muslim nations, as well as a 120-day halt on the entrance of all refugees — and an indefinite ban on Syrian refugees. The order was signed in the interest of national security, according to Trump's team. "I think in terms of the upside being greater protection of our borders, of our people, it's a small price to pay," one of Trump's top advisers, Kellyanne Conway, said in an interview with Fox News.

But what needs to be determined by the courts is whether the order is constitutional and/or whether the policy needs to be put on hold while its implication are further examined. Trump has indicated that he will not back down from his executive order, and his opponents have indicated they will do everything in their power to stop it. This commitment from both sides certainly makes it likely for court battles (it's already in the midst of some) and could make it prime for the Supreme Court.

Already, a federal judge in Seattle ruled last week to block the ban nationwide. Lawyers in opposition to the policy presented the argument that it was detrimental to residents, businesses and public university students and faculty in Washington state. They also said that it was unconstitutional because, they argued, it discriminates against Muslims. Then on Saturday, two California appeals court judges directed the White House to file a legal brief by Monday at 6 p.m. to defend the order. Over the weekend, almost 100 tech companies signed on to a legal brief that denounced the executive order, saying that it would be bad for American businesses, especially in the tech industry.

The Department of Justice made the deadline on Monday, filing a brief that said that the order represented "a lawful exercise of the President's authority over the entry of aliens into the United States and the admission of refugees." The brief also countered the claim of unconstitutional religious discrimination, arguing that the order does not mention any one faith by name.

Although the 9th Circuit Court of Appeals, which is based in San Francisco and is considered traditionally liberal, is set to hear arguments at 6 p.m on Tuesday, the controversy surrounding the executive order will almost certainly continue well past this session. On Tuesday, President Donald Trump even said that he will take it all the way to the Supreme Court if necessary. "We're going to take it through the system," Trump said in meeting at the White House. "It's very important for the country."