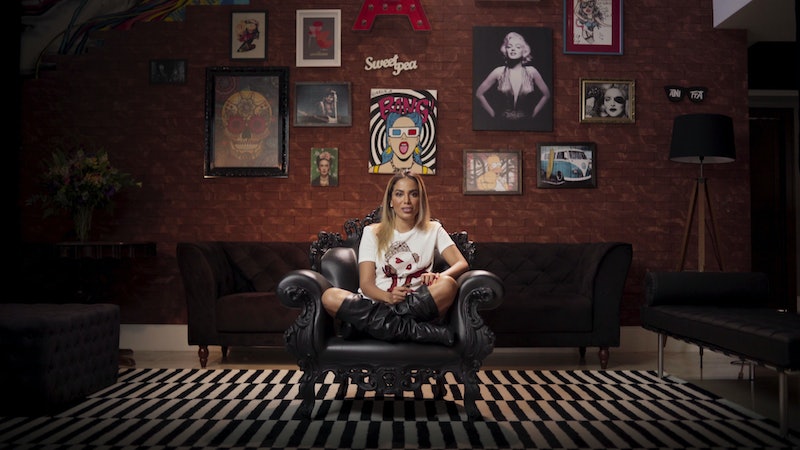 Docuseries that follow days in the life of a significant figure in pop culture — be it a musician, actor, model, or all of the above — are becoming increasingly common, and they tend to cling to streaming giants like Netflix and Amazon for viewership. This time around, Netflix is bringing Brazilian pop star Anitta to the small screen with her new docuseries called Vai Anitta. It documents a small portion of her decade-long rise to international fame, and all the highs and lows in between. And according to Uol.com, a Brazilian news site, she is hopeful that Vai Anitta will return for Season 2.

Anitta has a lot on her plate, but that doesn't keep her from dreaming. That's likely what got her where she is today, a trilingual, record-breaking artist gaining more and more recognition every day. “I used to tell my family that I was going to be a singer since I learned how to talk," she told Rolling Stone. “I like everything that challenges me ... I can’t accept that something is impossible.”

That mantra remained the case for Anitta even when she struggled with depression during the filming of her series. At one point, she had to pause production in order to return to a healthy mental state. She told São Paulo reporters about the experience earlier this month. "We had a gap when we recorded," she said, per a translated web page on Uol.com. "It happened ... in the middle. I had a very big depression crisis. I was three, four months without being able to assimilate. And my team knows how I am, if they played without me being in a position to follow, I would not be happy. Then everyone stopped and kept waiting for me to return to normal."

She said that her depressive episode is addressed in the series, but in an after-the-fact, semi-superficial way, simply because she was in no condition to film during the real thing. According to the same report, she's allowing her camera crew to continue filming for a possible second season.

For now, she's working on expanding her international footprint as an artist. According to Rolling Stone, she says she's been in the studio with Pharrell Williams and Rita Ora, and she's exchanged communication with Dua Lipa as well. And as exciting as that is, Anitta says she doesn't want to release an American collaboration just to do it.

"For me, when doing a collab it’s all about chemistry, and whether you think their style matches with who you are," she told Rolling Stone. "But right now, I want to show more of me, that I can do something by myself and reveal my personality alone. This year I’m going to work more in English, but first I want to get solid in the Spanish [language] industry."

Most importantly to Anitta, though, is that her music reaches children across all cultures and nationalities. "Music is something everyone can appreciate," she told Rolling Stone. "That’s why the chorus [to "Medicina"] has no lyrics, which goes 'Ta-ta-ta-ta-ra-ra-ta-ta-ta-ra-ra.' Everyone can sing it. That was my idea, to have kids from all over the world singing. Kids are the future, and I tried to [bring together] as many cultures as I could, singing the same thing." And she may have done just that with her new Netflix series, too.