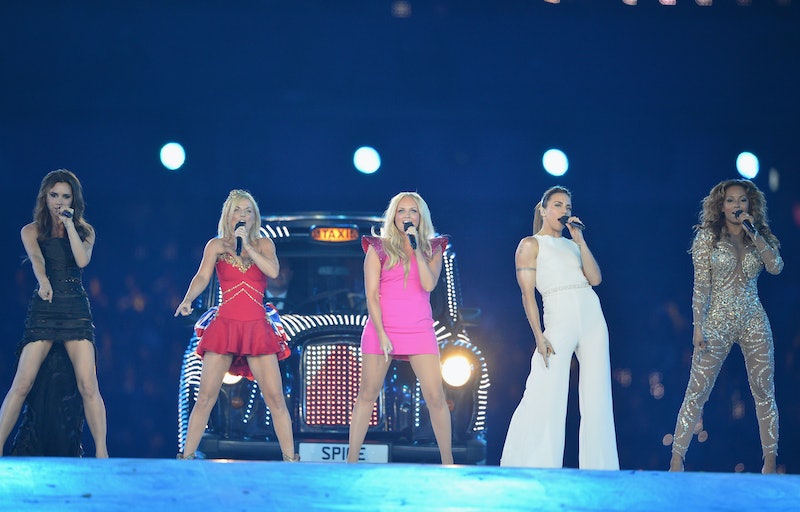 November 2018 will always be the month the nation's 90s nostalgia was reignited thanks to news that the Spice Girls were making a comeback. Their 13-date tour, which saw them spreading their brand of Girl Power across the UK, ended all too soon in my opinion. Notably missing from the Spice Girls lineup was Victoria Beckham who opted out in order to focus on her fashion business and her family. VB's absence left a Posh Spice-sized hole in the group and fans are still eager for her to rejoin. So will Victoria Beckham do Glastonbury 2020 with the Spice Girls?

Glastonbury is known for attracting major musicians to its lineup, including the likes of Adele, Dolly Parton, and Beyoncé, to name but a few. So could this be the event to reunite all the Spice Girls. Seriously, it would be the stuff of 90s dreams.

If you had lost hope that Posh Spice, would join the Spice Girls for at least one more show, you may have reason to hope. According to Mel B, Beckham might be interested in the idea of performing at Glastonbury 2020 for the festival's 50th anniversary next year. The Sun reports that during an appearance on The Lateish Show with Mo Gilligan Scary Spice Mel B said "Funnily enough, my mum was at her mum’s summer party and Victoria was there, and she did actually mention to my mum that she'd love to do Glastonbury for their 50th next year." She continued "It’s not just me saying it, she actually did say that to my mum."

Mel B has previously expressed a desire to perform with the Spice Girls at Glastonbury. The Metro reports that last month on Zoe Ball's Radio breakfast show Mel B said "it just happens to be Glastonbury’s 50th anniversary next year. I think that would be a really good thing to do. The girls are going to kill me for saying it but I don’t care, I think we owe it to our fans and ourselves. I would love that.

While these reports do sound very exciting for Spice Girls fans hoping to see the group all back together at Glastonbury, it might be worth taking them with a pinch of salt until VB and Glastonbury make the announcement themselves.

And, while I've got my fingers crossed, Beckham's reasons for not joining the tour are pretty legit. She recently opened up about missing out on the Spice Girls tour in an interview with Vogue Germany saying "it took me a lot of courage not to go on tour with the Spice Girls again, but to be the one who says: ‘You know, I’m not doing it because things feel different now than they used to’. I’d rather concentrate on my family and my company. I’m 45 now and very happy to be the woman I am…" Could the 50th anniversary of Glastonbury be the thing that makes her change her mind?

While I totally respect her reasons, I'm still hoping and praying she makes one little (or rather big) exception. Come on VB, we need a reunion with the full Spice Girls lineup, please!