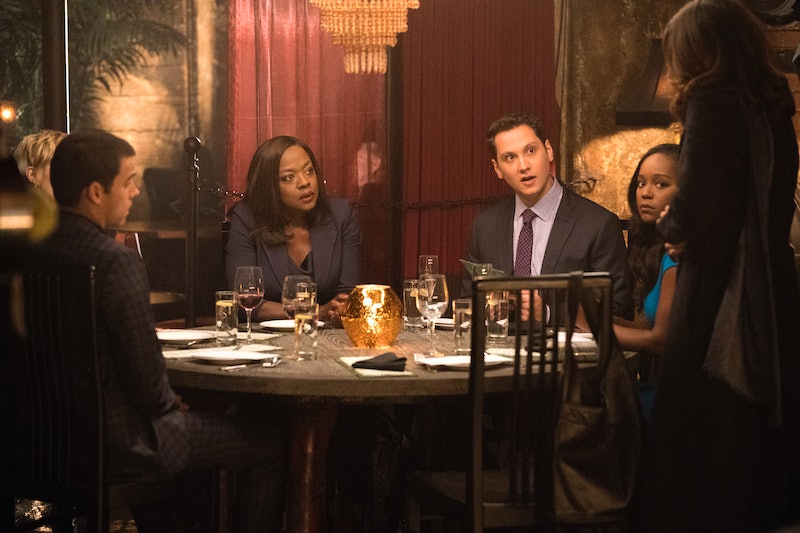 Spoilers ahead. Shonda Rimes has never shied away from major character deaths in her shows (RIP Derek Shepherd), and last season of How to Get Away With Murder was no different. Over the course of the season, it was revealed that Wes, one of the most beloved characters on the show, was murdered. Much of Season 3 centered on the investigation into his death, and followed the rest of the characters as they struggled to deal with their grief. But, as the Season4 premiere fast approaches, fans are wondering whether they've really seen the last of the troubled law student. Will Wes be in Season 4 of How to Get Away With Murder?

I hate to break it to you, but it does seem like Wes is truly dead. After all, we even get a shot of his burnt body as proof. So for fans hoping that this is all some kind a terrible joke, and although anything is possible in Shondaland, I truly doubt we're about to get some kind of Jon Snow moment here. Annalise Keating might be a law wizard, but she's no Red Witch.

Even worse, we learned that Wes' death was ordered by his girlfriend Laurel's father, who didn't approve of their relationship. That takes the awkwardness of meeting the parents to a whole new level. And to make things even more complicated, Laurel is pregnant with Wes' child. Yikes.

But, even though it doesn't seem like Wes will be coming back from the dead any time soon, there's a possibility that we haven't seen the end of his character. There's always a chance that there will be more Wes flashbacks in Season 4, especially as the Keating Four continue to investigate what happened to their friend. In an interview with Variety, Pete Nowalk, creator of HTGAWM, revealed that Wes' death will continue to be a factor in Season 4:

"I won’t describe [the investigation into Wes' death] as a big plot point, but it is a major thing for Laurel’s character and I think it will be a major thing if she finds out and if she tells everyone else. How will everyone react? But we obviously didn’t just do it to not explain it — I think it’s basically opening up a door to a new world that I’m really excited about".

That seems to suggest that we might be seeing more Wes flashbacks as the investigation continues.

If that wasn't enough to convince you that you might not have seen the last of Alfred Enoch's adorable face, a little more internet sleuthing confirms that fans will still be seeing at least a little bit of Wes in Season 4. Listed in the IMDB cast information for the premiere episode, "I'm Going Away," is none other than, you guessed it, Enoch. Aha! It's not only the Keating Four who have learned a thing or two about investigation tactics from Annalise.

One can only hope that Wes will be back for at least a part of Season 4, because fans were really unhappy about his death, and took to Twitter to voice their disappointment.

Others are still holding out hope that his death might have been an elaborate hoax all along:

Maybe the writers will take the widespread fan devastation into account and find some way to bring Wes back. But, I have to say that I doubt it. Fans might have to settle for a few Wes flashbacks in Season 4 to satisfy their Alfred Enoch cravings.

Or, you know, you could always try Scandal or Grey's Anatomy. I don't think anything shocking or devastating happens on those Shonda shows... right?