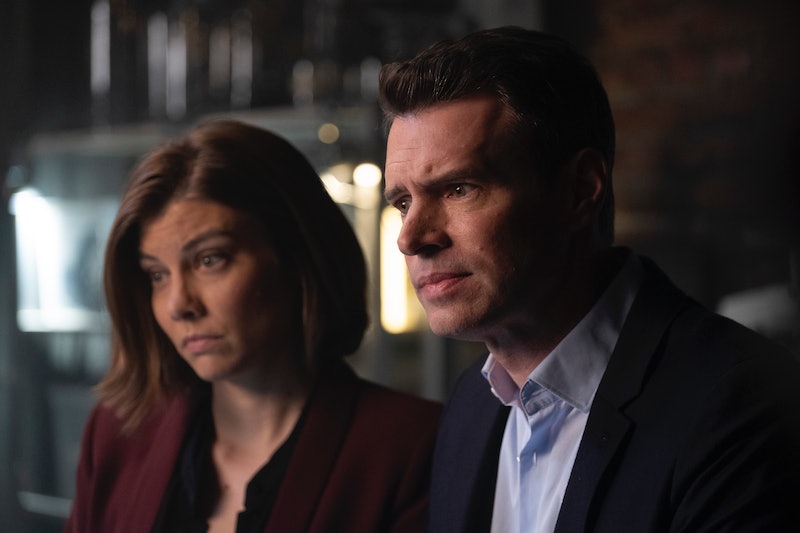 ABC/Dusan Martincek
By Meghan DeMaria
May 24, 2019

Whiskey Cavalier was canceled earlier this month, but the ABC drama could still see a last-second renewal. ABC is considering renewing Whiskey Cavalier, a network source confirmed to Bustle and other outlets. So fans shouldn't lose hope just yet. "The network is taking another quick look at the feasibility of renewing the show, and conversations are ongoing," the ABC source told Bustle. The network also "expects a fast decision, probably by the end of this week," according to the source.

Whiskey Cavalier starred Scott Foley and Lauren Cohan as FBI and CIA agents, respectively. According to TVLine, it was "ABC's third-lowest-rated hour drama," performing better than For The People and The Fix, both of which were also canceled by ABC. Still, its fans were dedicated, and it sounds like the fan response to the cancellation could have a real effect on the news.

"#WhiskeyCavalier is unfortunately over. I actually did have an investment in the show and the people. I'm sad. I'm grateful for the chance."

Fans were especially vocal after Wednesday's Season 1 finale. "You can't cancel the show with a cliffhanger like that!!!! #WhiskeyCavalier," @Azoth171 tweeted.

Whatever ABC decides about the show's fate, the fans have definitely done everything in their power to let the network know how they feel. One fan, @BklynSquint, tweeted a photo on Thursday showing an ad in Times Square asking ABC to renew Whiskey Cavalier.

There's at least a small ray of hope for fans, though. Lawrence tweeted that if the show isn't renewed, he'll share footage of the two leads' kiss, which was teased in the season finale. "#WhiskeyCavalier Look, if there isn't a Season 2 @DavidHemingson and I will tell you what happened AND show you the kiss. Deal?" Lawrence tweeted on Wednesday.

Foley also shared an Instagram video thanking fans for their work to save the show. Even if ABC doesn't renew it after all, the show's stars definitely appreciate all of the tweets and messages about it.

In an earlier post, Foley and his wife, Marika Domińczyk, who starred alongside him on the show, confirmed the news of the cancellation. Domińczyk was crying in the clip, and it's clear the show meant just as much to them as it did to fans.

Of course, if ABC doesn't choose to renew the show, there's always the possibility that another network, or a streaming service like Hulu or Netflix, could pick it up. And if Whiskey Cavalier is done for good, well, it'll live on in both its stars' and its fans' hearts.

More like this
'Who Killed Sara?' Won’t Return For Season 4
By Brad Witter
Everything To Know About The Possibility Of 'The Essex Serpent' Season 2
By Rachel Mantock
ITV’s 'Grace' Will Likely Return for A Third Season — & Many More After That
By El Hunt
Penn Badgley & Leighton Meester Met On A Horror Movie Set Before 'Gossip Girl'
By Jake Viswanath
Get Even More From Bustle — Sign Up For The Newsletter