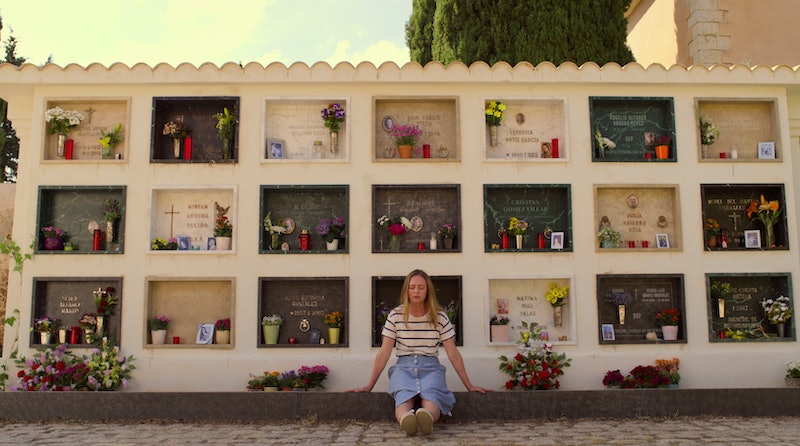 Courtesy of Netflix
By Rebecca Patton
May 15, 2020

If Netflix's new Spanish-British thriller is a success, then White Lines Season 2 is all but guaranteed. According to Deadline, the series (created by Money Heist's Álex Pina) was originally meant to have three seasons. So if it proves as successful as Pina's first Netflix show, then White Lines fans should expect two more installments.

The series follows a British DJ who died 20 years prior in Ibiza and his sister Zoe (Laura Haddock), who is investigating the cold case. White Lines features both British and Spanish actors and is a collaboration between Spain's Vancouver Media and production company Left Bank Pictures, the company that makes The Crown.

"It's been like an anthropological experiment," Pina said in an interview with the Financial Times. Indeed, The Crown producer Andy Harries told Deadline that White Lines was filmed "against the background of Brexit," joking that they were "the last attempt to demonstrate that Britain should be a part of Europe."

Fortunately, White Lines was a fruitful collaboration (though they were not, unfortunately, able to solve Brexit). "We share a sense of black comedy," Pina told the Financial Times of Brits and Spaniards, "but the Latin world is very extreme when it comes to emotions, feelings, love and friendship whereas the British world is more contained."

The showrunner recalled how their British coworkers were shocked by the Spaniards' spirited arguments. "We shout at each other, jump to our feet and tell each other 'This is sh*t!'" Pina said. "We're not angry, it's just our way of confronting things."

Writing a bilingual script also proved to be difficult. "In Spanish it seems like one sentence is never enough," Pina told the Financial Times. "Once we had translated our show, the English script was always much shorter than the Spanish one." However, it seems like they were able to find the right balance in both languages. "I hope what people feel when they watch the show is it sits properly," Harries told Deadline. "The Spanish are speaking proper colloquial Spanish in their natural rhythms, and the English is perfectly natural, too."

And while everyone may be cooped up inside right now, both producers argue that now is the perfect time to watch a show like White Lines. "Shows full of sunshine, full of light, full of beautiful landscapes are always important," Harries told Deadline. "This is a fantastic time [to be launching our show]. People can't go to the Balearic Islands right now, and this is the next best thing."

Hopefully by the time Season 2 comes around, audiences will be able to travel to Ibiza themselves.