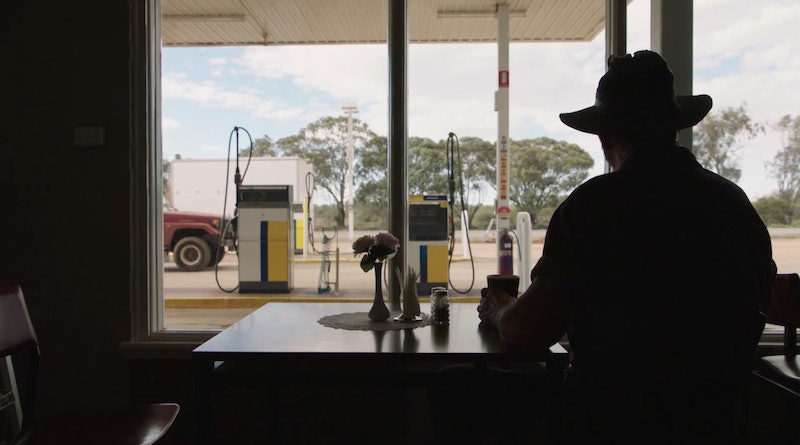 Wolf Creek's second season was set to air on the Pop network just in time for Halloween this year, but those looking for another batch of episodes from the horror film spinoff miniseries may be a little confused about when it's actually coming on. Despite a previous press release saying that Season 2 of Wolf Creek would air on Pop, the network appears to have since stated the show was no longer scheduled to air in October. However, series creator Greg McLean said in a recent interview with horror fan site Bloody-Disgusting.com that Season 3 of Wolf Creek could still happen some day.

However, according to The Hollywood Reporter, John Jarratt, who plays the main villain in the movies and the show, was charged in late August with sexually assaulting a woman in the 1970s. The outlet reports that he denies the allegations. It doesn't appear that anyone directly involved with the films or television show has spoken out about Jarratt's charges, nor did Pop reveal if the development had anything to do with the charges. In a response to a tweet by a confused would-be viewer, Pop's Twitter account said that the show would not be airing on the originally announced date and time. The account said the development was "due to a change in schedule," and that they would “keep fans posted on future plans to air the series," but didn't give any concrete details on when that would be.

Jarratt's attorney Chris Murphys tells Bustle in an emailed statement that, "There are very substantial faults in the allegation but now John's life is on hold and the Wolf Creek series filmed or pending are paralyzed until I can clear him." He added:

"The allegation of wrongdoing 42 years ago is denied. I have done everything within my power to bustle the court to have this matter heard and resolved quickly... He has been openly prepared to take a lie detector test and told the police that immediately this arose. I am hoping that the matter will be expedited to a hearing at the earliest possible date which unfortunately cannot be earlier than the first months of 2019. The actor has fully co-operated with police from the first moment. They have spoken to his wife who was living with him at the house at the time. It was totally expected that no charges would be laid. There is substantial evidence supporting his innocence but unfortunately asa matter of considerable distress to John and his family it needs to be finalized in court. I am prevented from supplying the evidence and statements from independent witnesses that will be available to theCourt while the matter is sub judice."

The Australian ABC News reported last week that Jarratt was expected to plead not guilty to the charges, and stated that Jarratt’s lawyer said his client’s “career has been put on suspension pending this allegation.” IMDb notes that there haven’t actually been new episodes of Wolf Creek released since Season 2 in 2017, despite the fact that American viewers are still waiting on those episodes to be released stateside.

The lack of new material for the TV series this year wasn't necessarily bad news for people who wanted to see the story continue — in an interview with Bloody-Disgusting.com, which specializes in horror film coverage, Greg McClean said that a third movie could still be in the cards. McLean hasn't appeared to directly comment on the charges brought against Jarratt, but they'll likely come into play when he decides how to move forward with both his films and the series.

Wolf Creek, which originally released in 2005, is a horror film focused on villain Mick (Jarratt) as he kidnaps and terrorizes a group of friends who had become stranded on a hiking trip. Wolf Creek 2 hit theaters in 2014, followed on the same killer and a different group of victims. Reviews, as noted in the Rotten Tomatoes pages linked above, were mixed for both films.

But prior to Jarratt's charges, it might have been possible for a cult following to lend itself to future projects' success. For now, it seems that those hoping to watch Wolf Creek Season 2 on the Pop network will have to find something else to watch ahead of Halloween, and those waiting for brand new content are probably out of luck for the time being.