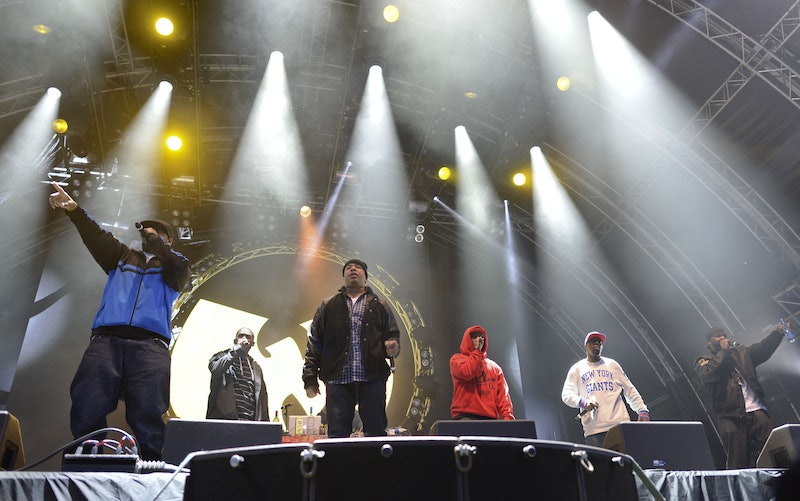 Whether alone or together, the members of Wu-Tang Clan — RZA, GZA, Ol' Dirty Bastard, Method Man, Raekwon, Ghostface Killah, Inspectah Deck, U-God, Cappadonna, and Masta Killa — have been responsible for some of hip-hop's most legendary moments. Seeing one of these rappers perform alone is enough to inspire intense awe, but seeing them altogether is nothing short of overwhelming. In the very best way possible. Since the group have increasingly been appearing on festival lineups, I want to know whether we'll get to see a longer set from this iconic rap group. So, will Wu-Tang Clan tour the UK in 2019? Let's look into their schedule and find out.

While Wu-Tang Clan are currently embarking on a tour of the U.S., with stops in Minneapolis, Seattle, Atlantic City, and more for their 25th Anniversary Tour, they will also be hauling themselves over to the UK among it all for a very special set at Glastonbury Festival later on in June, according to the BBC. However, that looks like that's all for UK shows this year. The group are fully booked up with shows all over the world until October 31, and I reckon they'll be taking the rest of the year off after that. They certainly deserve the break.

However, just to be sure, I've checked in with one of the Clan's reps to see whether that'll actually be the case. I gotta say, I am very fond of the idea of a Wu-Tang show in London around Christmastime. But while I'm very much here for seeing all the Wu-Tang staples live, I'm also looking forward to hopefully seeing some new material.

Having released their absolute fire EP Of Mics and Men, which soundtracked the recent Showtime Documentary Series of the same name, on Friday, May 17, the Wu-Tang boys have proven once more that they've very much still got it. More recently, the group made history when they played the first ever hip-hop show at the renowned country music venue Ryman Auditorium in Nashville, as Stereogum reported on Sunday, June 9.

So, if you didn't manage to catch founding member GZA on his UK tour back in April, and if you despaired over missing out on the Gods Of Rap Tour, which saw Wu-Tang Clan teaming up with Public Enemy and De La Soul back in May, then I reckon that's all the more reason for you to keep looking out for the next tour. Make sure to sign up for Wu-Tang Clan updates on Ticket Master so that you can be one of the first to be notified, and pounce on those tickets.

And if you are lucky enough to catch their set at Glastonbury this year, listen out for whether they intend to return to the UK anytime soon, because I reckon seeing Wu-Tang Clan live at least once should be on everyone's bucket list. As one of the most timeless groups out there, the Clan are still in their prime, even after all these years.