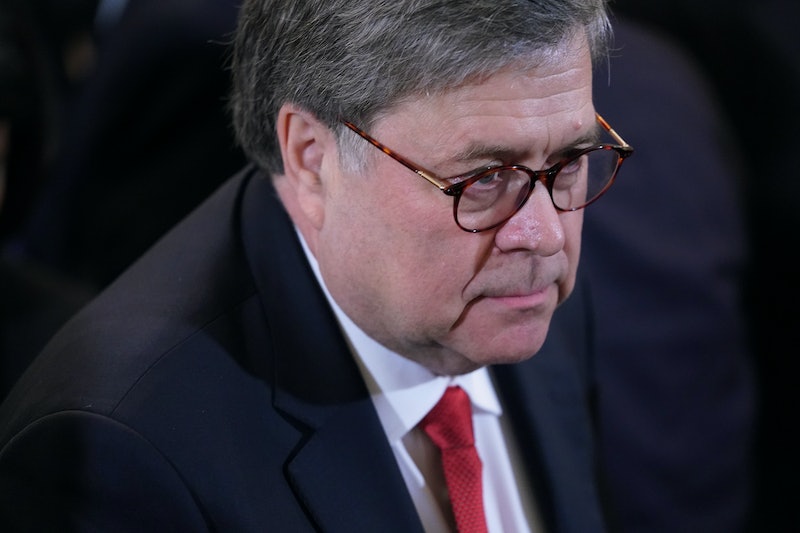 An open letter to the attorney general from LGBTQ employees at the Department of Justice (DOJ) laid out a dire situation where workers didn't feel valued — and experienced discrimination. Now, in response, Attorney General William Barr ordered an investigation into the DOJ's treatment of LGBTQ staff. "Employment decisions at the Department must be made solely on merit and free from discrimination," Barr wrote in a letter. "Every employee should know that I stand by that principle."

The open letter from LGBTQ employees, organized as DOJ Pride, quoted a survey of its membership that found just 31 percent values felt the DOJ "values its LGBTQ employees." Plus, only 43 percent agreed that the DOJ "does not discriminate on the basis of sexual orientation or gender identity or expression."

Some private comments included painted a troubling picture — one that Barr promised to investigate. "It’s difficult and demoralizing not knowing if your employer really believes LGBTQ people should have anti-discrimination protections (housing, employment, accommodations) or not," one employee wrote in their response.

Others criticized treatment specifically at the FBI academy and the Federal Bureau of Prisons (BOP). "Please do something about the FBI’s unfair evaluation process at the FBI Academy. There are many gay agents attending that are dismissed because they are not ‘bro-y’ or masculine enough," one employee wrote.

Barr, in his response, said he was "troubled" by these concerns. "I have shared your letter with the FBI and BOP and have directed them to take appropriate action to investigate and address allegations of discrimination and prevent it going forward," Barr wrote.

Also, for the first time under the Trump administration, the Department of Justice has an Equal Employment Opportunity (EEO) statement barring discrimination based on a number of protected classes including sexual orientation and gender identity. Barr's predecessor Jeff Sessions had not published one.

According to the Civil Rights Act of 1964, employers — including the heads of all federal agencies — must have such a statement. The last one from the DOJ was under the Obama administration, and it was inclusive. DOJ Pride wrote that they needed to know if they were still protected.

"Our members need to know whether the Department will continue to honor such protections with respect to its own employees," the open letter read.

Now, there's no doubt. "Issuing the statement is not only required by law — as you noted in your letter — it is the right thing to do," Barr wrote in his response.

The group's member survey also found that just 10 percent thought the DOJ "attracts and retains the best LGBTQ talent." The group warned Barr that could cause problems. "Given the crucial role the Department fulfills in our society — enforcing the nation’s laws and administering justice — we are concerned that so many employees who dedicate themselves to the Department do not think the Department values them, or that it attracts the best and brightest of the LGBTQ community," DOJ Pride wrote.

Barr's response shows clearly that he took their concerns seriously — a big departure from his predecessor. Sessions not only failed to issue an EEO statement, but he took active steps to roll back protections for LGBTQ workers — not just at the DOJ, but across the country.

That shows the significance of the new attorney general taking discrimination seriously.

More like this
17 Powerful Photos From March For Our Lives Protests Across The U.S.
By Michelle Toglia
5 Concrete Ways To Take Action Against The Rwanda Deportation Plan
By Rachel Mantock
How 5 People Upended Their Lives To Fight For Abortion Rights
By Hannah Smothers
Boris Johnson’s Leadership Is In Question – Again
By Bustle UK
Get Even More From Bustle — Sign Up For The Newsletter