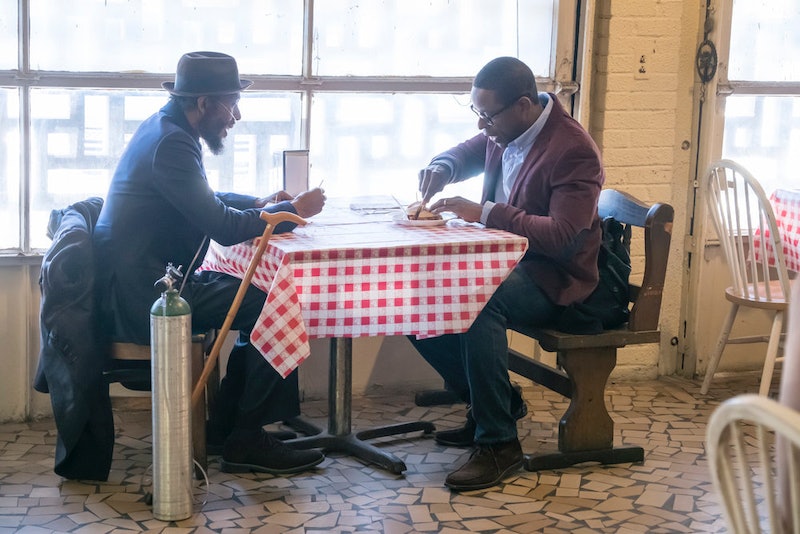 Though Randall grew up not knowing who is birth father was on This Is Us, his adoptive father gave him everything he could have wanted in a dad and more. Once Randall and William found each other, though, they both had to navigate the fact that Randall has two fathers — one who was there for all of the milestones and one who has only a few months to catch up. Finally, the two worlds collided. William visited Jack’s resting place on This Is Us, and while there, he thanked Jack for doing a wonderful job raising Randall.

I mean, are you crying already? Because I’m still crying. On their road trip to Memphis to see where he grew up, William asked Randall a bunch of questions about Jack and what he was like, and then he asked about where Jack was laid to rest. Randall said that his dad had been cremated and that Kate had the ashes (as viewers saw at the beginning of the season), but the family had taken a little bit of the ashes and sprinkled them under Jack’s favorite tree in a local park. Well, as soon as William heard that, he needed to visit said tree, and so they did.

Once they arrived, William talked to Jack, thanking him for being an amazing father and doing a great job raising Randall, because he clearly couldn’t do it. William knows he’s dying, and this was sort of a part of his farewell tour — telling Jack the things he never got to say to him when Jack was alive.

Though Randall may not have felt it growing up, he has two amazing fathers. William made the decision he felt he needed to when Randall was born, then Jack took over, and then William came back into the picture to see Randall through the end of his own life. William has provided Randall with a lot of perspective. He always has to be the best, even if it means putting his own health at risk, and both of his fathers recognized how to calm Randall down and take him out of himself.

I only wish that William and Jack could have met each other in the flesh, because they would have both been proud of the other for helping shape Randall into the person he is today.