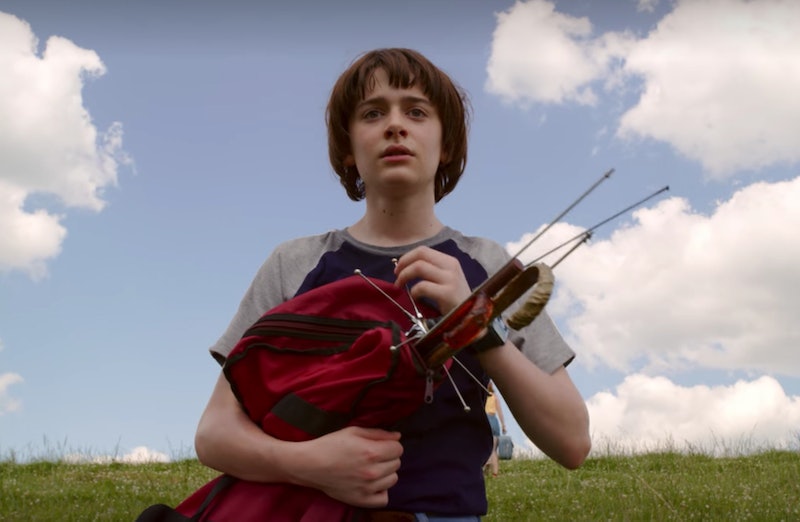 Spoilers ahead for Stranger Things 3. The new season of Stranger Things offered fans friendships and budding summer romances — much to the dismay of Will Byers, who just wants to enjoy a game of Dungeons & Dragons, but his best buds now prefer girls over games. There’s been speculation about Will’s sexuality in past, but one particular scene in Season 3, Episode 3’s “The Case of the Missing Lifeguard” has brought renewed interest in whether or not Will is gay. According to Noah Schnapp in an interview with The Wrap, Will’s sexuality in Stranger Things 3 is up for interpretation.

In the particular scene in question, Will and Mike get into a fight after Mike and Lucas don't take Will's D&D campaign seriously. Frustrated with his friends' preoccupation with their breakups, Will storms out of the house. When Mike catches up to him, he yells, “It’s not my fault you don’t like girls!” The line has sparked debate among fans over whether or not it hints at Will’s sexuality. Viewers have interpreted the line as a nod to his sexuality, but Schnapp believes it simply signifies the reluctance to grow up, but that ultimately, Will’s sexuality is “really up to interpretation.”

“While all the characters were out developing and growing up, Will was in the Upside Down and he was alone there, not interacting with or connected to his friends or the rest of the world," Schnapp told The Wrap in the interview. "And when he got back, he expected everything to just go back to how it was before, how it was when he was normal and when he was a kid and he wanted to go back to the basement and play D&D.”

“All his friends have girlfriends and they’re out dating, and he just wants to have fun with his friend… When you hear Mike say that line, it’s really up to the audience to interpret it. I kind of just interpret it like he’s not ready to grow up and he doesn’t really want to move on to dating and relationships yet. He still wants to be a kid and play in the basement like he did in old times.”

Will’s sexuality has long been a talking point for fans. In the first season, his sexuality is also a source of material for bullies at Hawkins Middle School. In Season 1’s “The Body" — in which Will is presumed dead after his "body" turns up in the lake — Mike, Eleven, Lucas, and Dustin confront two bullies who laughed through Will's memorial assembly in the gym. In the scene, one mouthbreather says to Mike, “What’s there to be sad about, anyway? Will’s in fairyland now, right? Flying around with all the other fairies — all happy and gay.”

In 2016, Schnapp addressed speculation about Will's sexuality in an Instagram post, as reported by Variety. In the post, the actor wrote that “everyone here is missing the point.” He wrote, “For me, Will being gay or not is besides the point. Stranger Things is a show about a bunch of kids who are outsiders and find each other because they have been bullied in some way or are different. Does being sensitive, or a loner, or a teenager who likes photography, or a girl with red hair and big glasses, make you gay? I’m only 12 but I do know we all relate to being different.”

Schnapp is right in that Will is still just a kid. Given that he’s still a young teen on the cusp of adolescence, perhaps Will isn’t quite sure about his sexuality just yet and is in the process of figuring it out. Even then, Will certainly doesn’t owe anyone an explanation.

More like this
Caleb McLaughlin Details Racism From 'Stranger Things' Fans
By Radhika Menon
10 Stranger Things-Inspired Halloween Costumes For True Fans
By Emma Carey
'School Of Rock' Changed Joe Keery's Life Forever
By Alyssa Lapid
24 Years Ago, 'Friends' Dropped Its Most Underrated Ross & Rachel Episode
By Grace Wehniainen
Get Even More From Bustle — Sign Up For The Newsletter