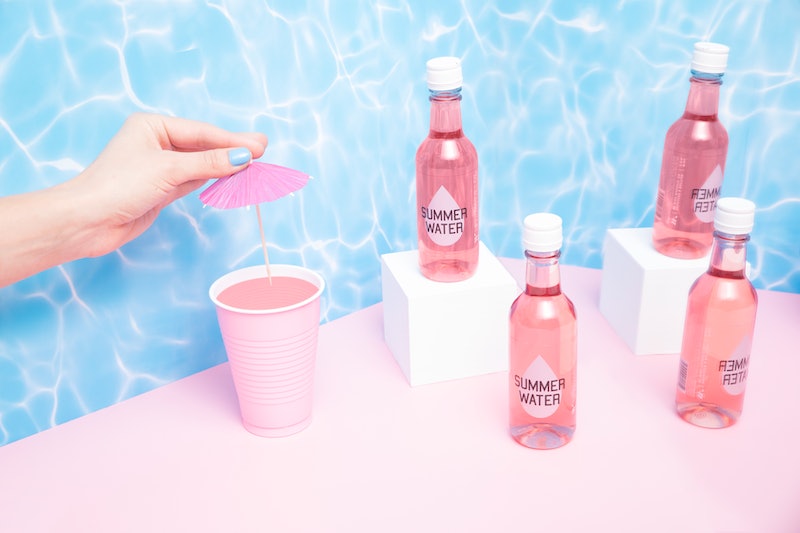 If you're dying to get your hands on one of the most sought-after rosés of the 2018 summer season, you're going to have to get in line. Winc’s Summer Water Societé Rosé Club is the hottest new member's club in town, which means that everyone and their sister wants to sip this blush-colored beauty. If you're not in the know, digital winery Winc has launched a "premium, members-only club that caters to the ultimate rosé lover and guarantees enough rosé to last you from Memorial Day through Labor Day," according to a press release from the company. This rosé club is strategically designed to make sure your glass is always full while you're busy summering like a boss.

As a member, you'll receive three expertly-timed shipments of Summer Water Rosé in 1.5L limited-edition magnums and limited-edition droplets, which are mini bottles of Summer Water Rosé. Enrollment is open until May 15. However, if you want to join the club, you probably want to sign up right freakin' now because last year's installment of the club had a waiting list of of 1,000 people, and for good reason.

On its website, Winc described this pink pleasure as, "Dry, light and perfectly crisp — with notes of strawberry, pink grapefruit, and white peach." The price for endless rosé from Memorial Day to Labor Day is $350, and includes May and July shipments of three limited-edition screen-printed magnum bottles, which is equal to six regular bottles.

In June you'll receive a 24-pack of droplets, equal to six full-sized bottles. "It’s more than the rosé of the season, it’s a state of mind — every drop full of pink-tinted possibility," Winc noted on its website. If you already have FOMO, join the Summer Water Rosé waitlist now to increase the chances of getting your hands on some of the good stuff. Even if you don't get off the waiting list, you can still sign up with winc to get other refreshing wines delivered right to your door. It's free to join, members get four bottles of the vino of their choice each month, and, wait for it, the shipping is totally free.

What's more, you don't have to have too much FOMO about not being in the cool-kids club because you can still order full-size bottles of the 2017 Summer Water Rosé for $18. Both vegan and eco friendly, Summer Water Rosé pairs perfectly with poultry, fish, shellfish, sushi, and veggies. Basically, it's summer in a glass. "This dry rosé reflects the pale pink promise of the perfect warm-weather wine. It’s perfectly crisp, lighthearted and destined for a good time," Winc noted on its website. "The grapes for this Central Coast Grenache and Syrah blend were picked early in the season to achieve a natural acidity that’s ideal for summer drinking."

It's no secret that rosé is synonymous with summer. In fact, rosé is so beloved PEOPLE magazine reported that musician and actor Jon Bon Jovi and his son Jesse recently launched their own brand of the preferred pink drink called Diving Into Hampton Water. This French rosé is an invitation to experience the finer things in life, because you deserve every good thing that could happen to you. "The Hampton Water life is life perfected. The sun is never too hot, the water is never too cold, and the rosé never runs out," the website stated. "Hampton Water is your personal invitation to join us in this life… even if it is just for one glass."

According to PEOPLE, the name came about during a late-night conversation between father and son while they were relaxing in the Hamptons. "My dad came over to me and asked ‘Do you want some more pink juice?’—which is what we used to call rosè," Jesse told PEOPLE. "I told him ‘No, no, no, we call it Hampton water now.’ We just thought it was pretty funny." No matter how you get your rosé on this summer, it's clear that the possibilities for sipping millennial pink drinks are endless. And, no matter which rosé is in your glass while you soak up the sun, you're totally empowered to throw it back to the '90s with some classic Bon Jovi tunes while you embrace the rosé-all-day lifestyle. Because, Bon Jovi loves the pink juice as much as you do. Now summer just needs to hurry up and get here already.