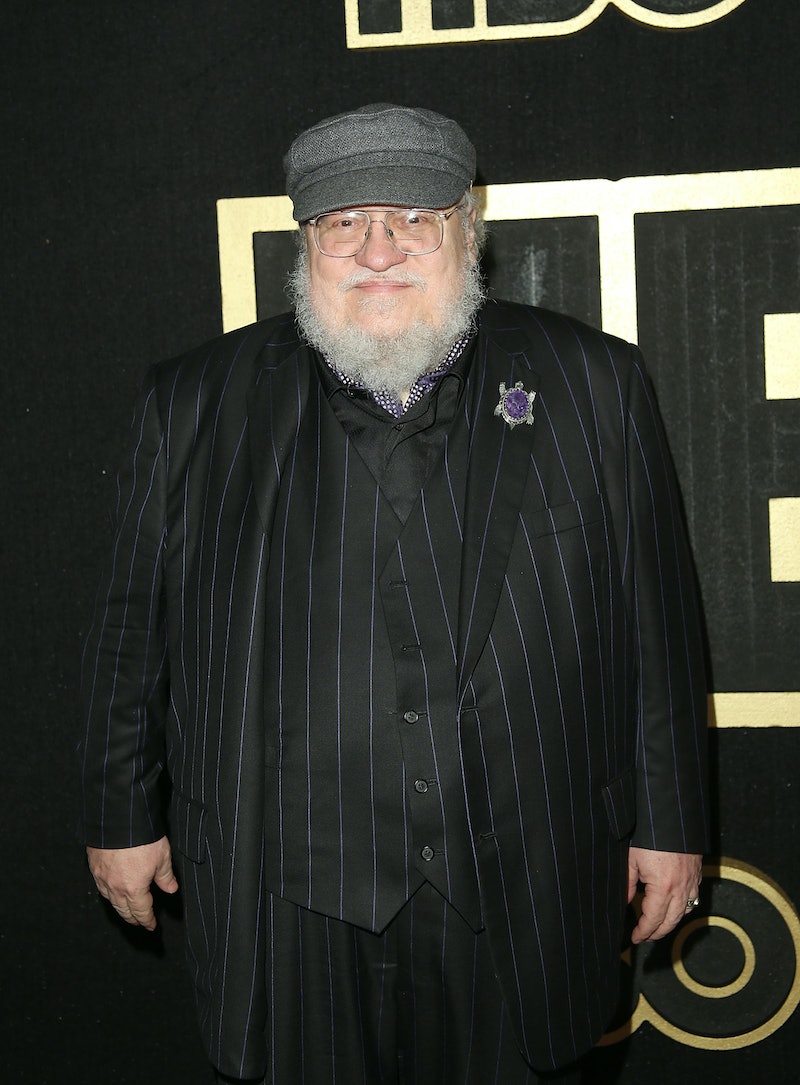 For diehard fans of the Game of Thrones books, the past few years have been... frustrating, to say the least. The last entry in the Song of Fire and Ice series, A Dance with Dragons, hit shelves nearly seven years ago. The plot of the award-winning HBO adaptation of the series has now surpassed the written canon. And for nearly four years, fans have been waiting with baited breath for the sixth book, The Winds of Winter. But Fire and Ice stans are finally being thrown a bone — because George R. R. Martin will finally be releasing the GoT prequel, Fire and Blood, on Nov. 20. And you know what? He's fed up with the pace of his writing, too.

In an interview with The Hollywood Reporter, Martin, who first began publishing A Song of Fire and Ice in 1996, voiced a sentiment many of his fans will recognize: that he wishes he'd been finished with his latest book, like, four years ago. I wish that, too!

Martin is currently working on The Winds of Winter, which is reported to be nearly 1,500 pages. The length, and the plot intricacies (Martin has promised that the book will be "very complex") are two of reasons behind the extreme publishing delay, as is Martin's writing pace: "slow." And that's not even taking into account the enticing distractions of the HBO production schedule. I mean, if you were given a chance to hang out on set, in Croatia, with Emilia Clarke aka Daenerys, you would scream and then faint and then run to the nearest airport, right? Right. Duh. Of course you would. I'm only speculating here.

Martin says he's actually skipped set visits for the HBO series' final season in order to get his final two books finished. And in the meantime, readers can soon dive into the 736-page Fire and Blood, which takes fans back 300 years before the start of Game of Thrones, to a time when "dragons ruled Westoros." Beginning with Aegon the Conquerer, creator of the Iron Throne, and moving through centuries of Targaryen rule, Fire and Blood is set to be the first of a two-part volume told from the perspective of a Citadel maester, charting the rich, drama-filled history of the Targeryen rule. The tome will include 80 original black and white illustrations from artist Doug Wheatley, perhaps best known for illustrating several popular Star Wars comics. Fire and Blood could very well build a bridge between GoT book and television fandoms, as it essentially details all the juiciest gossip relevant to the current, uh, "situation."

And as for The Winds of Winter? Well, 2018 is on its way out — and the latest hopeful publishing date has drifted into 2019. But I have faith in you, R.R.! 2019 is your year! It's our year! 2019 will finally pull back the curtain and reveal the discrepancies between the books and the television series, as the two diverge and settle into their own, alternate plots.

More like this
'The Sandman’s Ending Is A Departure From Neil Gaiman’s Comic Book Series
By Kadin Burnett
I've Read The Harry Potter Books 30+ Times & This Plot Hole Haunts Me
By Kelsey Stiegman
'The Simpsons' Will *Finally* Address How They “Predict The Future”
By Sam Ramsden
The 'PLL: Original Sin' Creators Say A’s Identity Will Be “Very Clear” By The Season Finale
By Alyssa Lapid
Get Even More From Bustle — Sign Up For The Newsletter