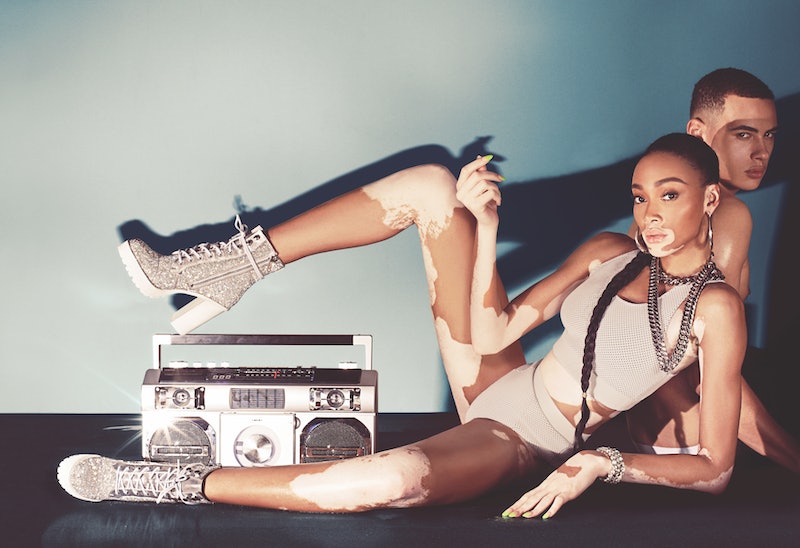 Winnie Harlow is adding another title to her already impressive résumé: shoe designer. The supermodel debuted the Winnie Harlow X Steve Madden collection with five pieces of footwear inspired by her Jamaican heritage.

“It’s very vibrant,” Harlow tells Bustle of the launch. “It has bright and metallic colors, and I made sure to include a shoe for every occasion.”

When it comes to her own footwear choices, Harlow says her priorities are always in flux. Some days she’s more focused on function, while other moments call for fashion first.

“It [depends] on where I am going,” she shares. “Typically, I prefer comfort and love being in trainers or boots all day."

In fact, if Harlow could only wear one type of shoes for the rest of her life, it’s not much of a competition. “Trainers all day every day,” she reveals. “I’m such a tomboy and I love to be casual and comfortable in my down time.”

That said, she does have an affinity for heels — and with longer, warmer days on the horizon, there’s one pair she’s particularly excited to unveil.

“I have some rope, lace-up stiletto shoes in the collection, which I cannot wait to see everyone wear this spring,” she shares. “I love throwbacks, so I think most of the trends that come back are super fun. I don’t think people should take fashion so seriously.”

This collection marks the second Harlow designed with Steve Madden (the first was released last fall). For the campaign, she teamed up with photographer Steven Klein to produce imagery that conveys the strength of women like Grace Jones and Neneh Cherry, while also weaving in the influences of Jamaican street culture, including dancehall and reggae.

“[Designing] was honestly such a rewarding experience,” she shares. “I’m really grateful for the team for listening to my ideas and inspirations. It was so collaborative in every sense of the word, and being able to learn from someone like Steve and his team was great.”

The Canadian model first broke onto the fashion scene as a contestant on America’s Top Model back in 2014. Her career as both a model and advocate for people with the skin condition vitiligo has been on the rise ever since. Most recently, she starred in Tommy Hilfiger’s Spring 2020 campaign alongside Candice Swanepoel and Hannah Ferguson.