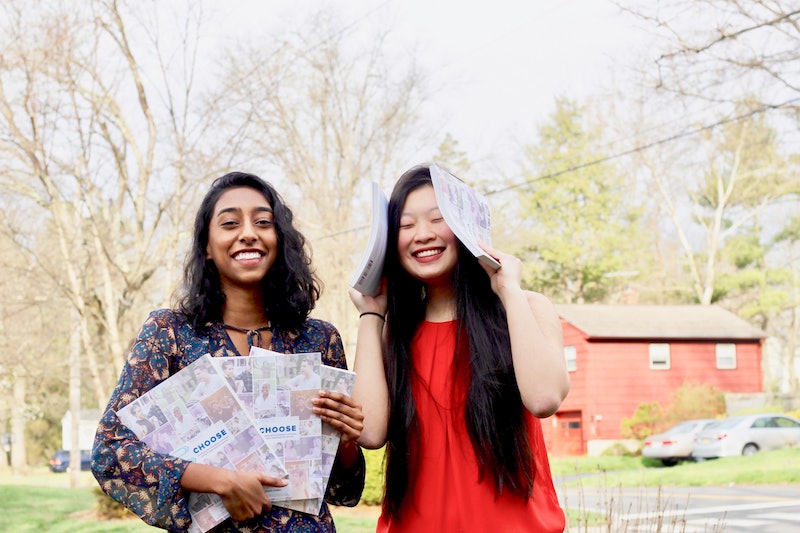 Winona Guo and Priya Vulchi were sophomores at Princeton High School when they realized something: Their school had a race problem, and no one seemed to know how to address it. "We would walk into Princeton High School and realize that not only were the friend groups racially divided, but also the clubs, the extracurriculars," Guo tells Bustle. "So all of the sudden, we started noticing that race infused itself into every part of our lives. And we started talking to people about their stories."

"Race had a place in our lives from childhood," Guo adds. "But we had never had the words to even have a conversation about it."

The two teenagers began driving around their hometown, Princeton, New Jersey, and asking strangers to share their experiences with racism. They collected all the stories on a website, but they wanted to do something more.

"We were suffering from conversations in the classroom where we were being pressured to speak on behalf of our entire race [and] basically nobody was investing in racial literacy," Vulchi tells Bustle. "We saw potential to leverage all these stories we collected and use them for the benefit of social justice and specifically racial literacy. So we started brainstorming The Classroom Index."

In the following months, Guo and Vulchi wrote The Classroom Index, a 224-page racial literacy textbook, sponsored by Princeton University, that draws on the stories they collected and supplements them with statistics and research about systemic racism.

"[The textbook] is kind of connecting the interpersonal or internalized events and showing the larger systematic implications of those events," Vulchi says. "We like to say we’re connecting the heart and mind gap — bridging the gap between our hearts and minds. Because the story really helps spark empathy, and then the stats ground the interview."

The book was picked up by schools in 30 different states — an achievement that Guo and Vulchi also perceived as a huge problem. "[It's] awesome but also problematic because 60 percent of those stories are from our hometown. Students across the nation are opening our book and looking at stories that probably don’t reflect or represent the neighborhood or states that they live in," Vulchi says.

The two started thinking bigger. After graduating from high school in 2017, the teens embarked on a months-long journey through all 50 states and collected over 500 more stories. Now, they're writing the second version of The Classroom Index and living in New York, where they work as the youngest ever TED Residents (their TEDWoman talk will be released online on May 7). Additionally, Guo and Vulchi founded the organization CHOOSE to promote racial literacy in schools nationwide.

In fall 2018, the two will be heading off to college — Vulchi is heading to Princeton, and Guo will be going to Harvard — and they plan to release the second, more comprehensive version of The Classroom Index. Here's what these phenomenal young women had to say about racial literacy in the United States and what comes next for them and their organization: