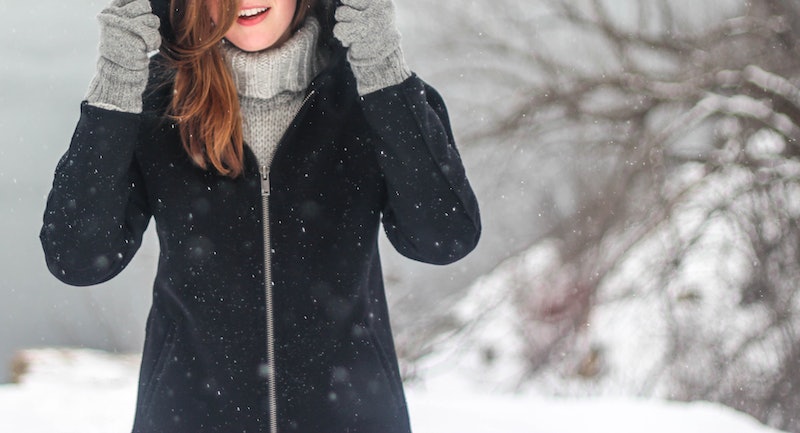 We may be halfway through March, but winter is clinging on as best as it can. On Saturday, the National Weather Service (NWS) issued a warning for the late season Winter Storm Stella, a possible nor'easter anticipated to hit the East Coast on Monday evening through Tuesday. Meteorologists are even saying that blizzard conditions are possible, because, clearly, someone angered the weather gods. (Thanks for that, whoever you are.)

According to the NWS, the storm will follow the East Coast from south to north, where it's likely to hit cities along the Interstate 95 corridor, such as Boston, New York, and possibly Washington, D.C. Although the mid-Atlantic and Northeast are likely to bear the brunt of the storm, meteorologists also predict that it will dump snow on much of the Midwest, from the Dakotas to lower Michigan, and some parts of the South reported getting snow over the weekend. According to the Weather Channel, Winter Storm Stella may leave behind the season's biggest snowfall. Some areas may receive between 6 inches and a foot of snow, and strong winds may cause blizzard conditions in some parts of New England.

To be fair, though, that's not saying much considering how mild this winter has been. February was particularly warm, breaking local records left and right and narrowly avoiding becoming the warmest February on record. In D.C., the weather was so unseasonably spring-like that the city's famous cherry blossom trees were expected to bloom far earlier than usual until the recent cold snap.

But that's all likely to change with Winter Storm Stella. Accuweather meteorologist Tony Zartman told USA Today that the strong winds and heavy snow may cause power outages and disrupt travel in the mid-Atlantic and Northeastern regions of the U.S. this week.

March may be associated with spring in many parts of the country, but it's not actually uncommon for winter storms to hit this late in the season. In 1941, New York City's Central Park was buried underneath 18 inches of snow after a March storm, and in 1960, a nor'easter left behind nearly 15 inches.

Meteorologists will continue fine-tuning predictions as the storm moves closer, so be sure to keep an eye on the weather this week. Most importantly, don't forget to stock up on hot chocolate for when you're watching the snow pile up outside your window.

More like this
Your December Astrological Forecast
By Nina Kahn
Here’s Your Daily Horoscope For November 30, 2022
By Mecca Woods
Here’s How To Find Your Spotify Wrapped
By Emma Lord and Emma Carey
The Moon Tarot Card Wants You To Seek Clarity
By Nina Kahn
Get Even More From Bustle — Sign Up For The Newsletter