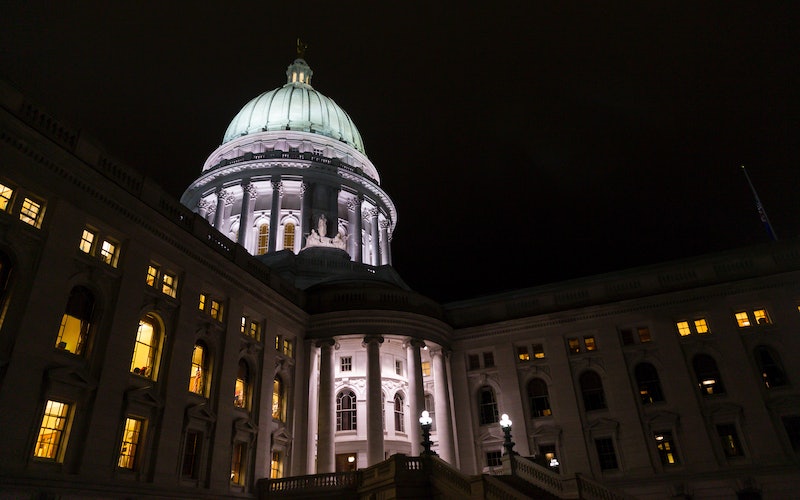 In a midnight legislative session on Wednesday, Wisconsin Republicans stripped power from the incoming Democratic governor before he even took office. Although Democrats won every statewide office in the November elections, Republicans in the state legislature rushed through a package of legislation during the lame duck session that will severely curtail those Democrats' authority when they're sworn in in January. Here's what you need to know about what a New York Times columnist calls "an anti-democratic power grab" in the Badger State.

First, some context: In the November elections, Democrats won every statewide office in Wisconsin and received 205,000 more votes in total than Republicans, according to the Washington Post. Most notably, Democrats Tony Evers and Josh Kaul won their elections for governor and attorney general, respectively, by handy margins. In short, Wisconsinites overwhelmingly voted for Democratic candidates in the last election.

In response to these Democratic victories, Republican lawmakers hurriedly passed a set of laws after the election that will limit the powers of the governor and attorney general once they take office. Although Democrats received hundreds of thousands of more votes than Republicans in the last election, the state GOP has effectively gerrymandered the state to ensure that they still control a majority in the state legislature: According to NBC News, Democrats won the popular vote in state assembly races 54 to 46 percent, but Republicans will control 64 percent of seats in the new session of Congress.

During a midnight session on Tuesday, Republicans used their majority to pass legislation that will strip powers from the democratically-elected governor and attorney general before they take office and, more broadly, weaken Democrats in the state. Gov. Scott Walker is expected to sign the package of bills.

Some of the provisions are rather complex. But in general, Wisconsin Republicans passed bills that will:

Almost all of this legislation transfers power from Wisconsin's executive branch, which will soon be controlled by Democrats, to the GOP-controlled legislative branch. In justifying their moves, Wisconsin Republicans claimed that the state's governor and attorney general had long held too much power, and that the new bills would restore balance to the state's government.

But Republicans have controlled the governor's mansion and attorney general's office in Wisconsin since 2010 and 2007, respectively. At no point during that time did Republicans in the state legislature propose limiting the executive branch's power; rather, the GOP announced the new package of bills only after Democrats won control of Wisconsin's executive.

Moreover, the bill was passed in the middle of the night, after closed door negotiations to which Democrats were not invited, according to the Times Herald. Days before the vote, protesters stormed the state capitol, shouting "shame!" and "respect our votes!" as the bills made their way through the legislative process. Walker was booed and heckled by protesters on Tuesday while attending a Christmas tree lighting in the capitol.

“You’re here because you don’t want to give up power,” Democratic Assembly Minority Leader Gordon Hintz told his Republican colleagues during the lame duck session, according to Politico. “You’re sore losers. Does anybody think this is the right way to do business? If you vote for this, shame on you. You will go down in history as a disgrace.” Democrats are planning to file lawsuits to stop the legislation from taking effect.

In stripping power from the incoming Democratic governor before he takes office, Wisconsin Republicans are following the playbook of their counterparts in North Carolina, who passed similar legislation after a Democrat won the 2016 gubernatorial election.