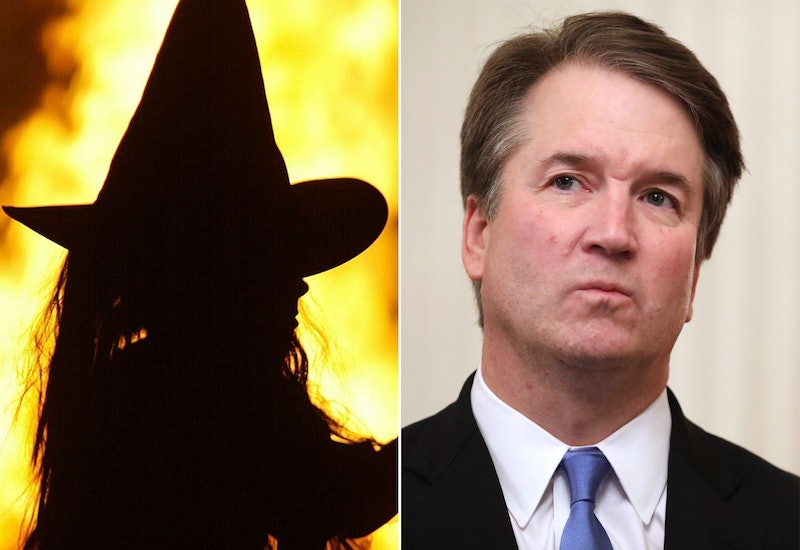 Magic is about to get political. Witches may be planning to hex Brett Kavanaugh, and Amy Kremer, the co-founder of the Women for Trump PAC, is upset. As she spoke with MSNBC's Ali Velshi on Sunday, Kremer derided liberals as "mobs" who supposedly harangue and harass Republicans. "It is a scary time right now," she said. "Now you’ve got witches that are placing a hex on Brett Kavanaugh."

In her comments, Kremer didn't specify the exact details of such an occult gathering against the newly confirmed Supreme Court Justice and didn't point to any particular coven of witches. But here's a theory: Kremer may have been referring to an upcoming public event in Brooklyn, New York. Organizers at a Bushwick bookstore known as Catland Books said they would gather with witches to put a hex on Kavanaugh on Oct. 20.

The event will take place several weeks after Kavanaugh was confirmed to the Supreme Court on Oct. 6. The conservative judge had been publicly accused of sexual assault by multiple women — allegations that Kavanaugh has strongly denied.

One of the women, California-based professor Christine Blasey Ford, became the focal point in public hearings. In an interview with The Washington Post, Ford alleged that Kavanaugh sexually abused her at a party in Maryland in the 1980s. In response, Kavanaugh vehemently and categorically denied the accusation. Both were called to appear before the Senate Judiciary Committee on Sept. 27 to testify about Ford's claim.

Per Kremer, liberal critics turned to the occult to condemn Kavanaugh. But on Twitter, the Women For Trump co-founder seemed to contradict herself as Kremer implied that she did not, after all, believe in witches.

It could very well be that Kremer was referring to the Catland Books event. In its invitation uploaded to Eventbrite, organizers for the gathering said, "Please join us for a public hex on Brett Kavanaugh and upon all rapists and the patriarchy which emboldens, rewards and protects them."

"We will be embracing witchcraft's true roots as the magik of the poor," the organizers added, "the downtrodden and disenfranchised and its history as often the only weapon, the only means of exacting justice available to those of us who have been wronged by men just like him."

Concerned about the event and supposed hostility against conservatives, Kremer said on MSNBC that Americans should not be forced to live in such worrying conditions.

It's unlikely that the Women For Trump co-founder's worries will be heeded. Organizers for the upcoming ritual of sorts also encouraged people that they can throw a hex on other figures, not just Kavanaugh. "So bring your rage," they said, "and all of the axes you've got to grind."

In the second part of the gathering, organizers said that there would be "The Rites of the Scorned" — which would be held to honor and affirm "those of us who have been wronged and who refuse to be silent any longer." Bustle has reached out to Catland Books for comment.