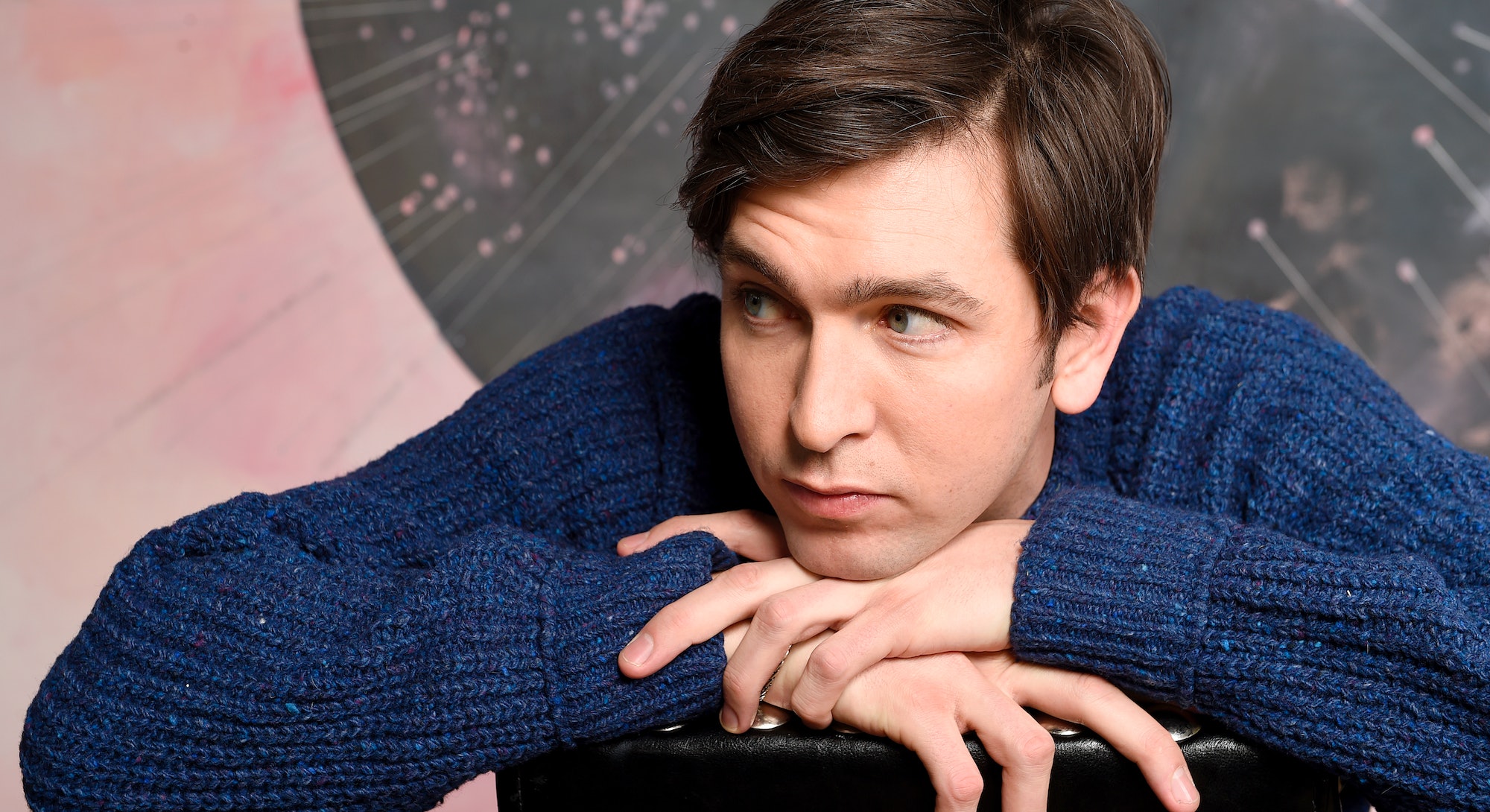 Like many settings that cater to the wealthy, the Bowery Hotel lobby feels pleasantly impervious to the outside world. Inside its crimson-hued interior dotted with mahogany tables and leather chairs, the realities of a muggy Wednesday afternoon in late-August New York City give way to an alternate, more luxurious one, where it makes perfect sense that an actual fireplace is burning for the sake of ambience in the dead of summer. When Nicholas Braun steps into the lobby wearing a white collared shirt, he fits in just fine — figuratively speaking, but also literally, as he folds his 6-foot-6 frame onto one of the low couches, his knees nearly reaching the height of the table in front of us.

Much like his character, the now-iconically bumbling Cousin Greg on HBO's Succession — who was once so out of place among his wealthy media-magnate cousins that he appallingly suggested spending his first real paycheck at California Pizza Kitchen — Braun is getting used to taking experiences like today's in stride. He's gamely done everything from day drinking to mini-golfing to riding rollercoasters in Coney Island with journalists, so what's meeting another stranger? He's just glad people like Greg, and Succession, in some corner of TV fandom — even if he's stopped checking Twitter and doesn't follow the memes that crop up in his honor every Sunday night. And the interviews are "becoming more enjoyable," he says with a nervous smile.

If last summer made Season 1 of Succession a slow-burn success that prompted a slew of appreciation pieces on Braun's character (The New Yorker: "A Tribute To Cousin Greg, The Secret Weapon of Succession," Uproxx: "A Love Letter To Cousin Greg From HBO's Succession," The Ringer: "Cousin Greg — Sweet Cousin Greg — Is the Only Non-sociopath in HBO's Succession"), Season 2 has only brought more acclaim for Braun's performance, as he continues to imbue the hapless Greg with an off-putting confidence that makes him an engrossing combination of lovable, pitiable, and entertaining. He's the true wild card of the Roy family: slammed by his cousin Kendall for procuring him crappy cocaine from the park one minute, and given an angry-yet-proud pat on the back from his boss Tom after politely asking permission to blackmail him the next. He's learning how to move through the Roys' rich and ruthless world, but he still doesn't quite (and hopefully won't ever fully) fit in.

For Braun, and for many viewers, that's Greg's appeal. "There are very few characters in the show that are earnest... that [ask] for things they want in a vulnerable and not an Alpha way," he says. "So I think Greg is…" he trails off, the space between each word widening, and it feels for a moment as if he's actually Greg, paralyzed by a direct question from patriarch Logan Roy. "I don't know, it's hard to talk about," he says, catching himself. "I'm still not great at talking about it."

Greg's ineloquence is played for maximum cringe on Succession, but in person, there's an endearing charm to Braun's nervous patter. It was enough to win over the audience during his first ever late-night appearance on The Late Show with Stephen Colbert in early August, an experience he calls "totally surreal." He was so nervous that he spent the two days prior working out, desperately trying to do anything to take his mind off his impending interview. "I just thought, 'Well, you know what, maybe I’m gonna go in there, and I might be a total mess and I might have a panic attack and I might totally freak out or something, but I can’t stop it,'" he sighs.

It was Braun's nervous energy, not his talk show-worthy anecdote about meeting President Bill Clinton, that ultimately became the bit. "I was told to milk this," Braun says in the clip, his face reddening after Colbert ribs him for taking too long to get to the kicker of his story. Colbert, delighted and shocked at Braun's innocent breach of talk-show decorum's fourth wall, spins a full 360 degrees in his chair and delivers him a handshake of approval. There is uproarious applause.

Nicholas Braun is so good at playing guileless, you'd be forgiven if you assumed he was only recently plucked from obscurity and channeled being a Hollywood outsider into his performance as Greg. In reality, though, the opposite is true. The 31-year-old starred in his first TV movie at 11, and learned to act alongside his father, who took it up as a hobby after a successful career in the music business (he designed iconic album covers like The Rolling Stones' Sticky Fingers and collaborated with Andy Warhol on The Velvet Underground's famous banana cover).

At first, part of the appeal of acting as a kid was it allowed him to feel mature. "I think I just wanted to make something of myself from a young age," Braun says. "The allure of going on the train to New York for an audition and going to a room and getting a part and then maybe getting to leave school for two months to [film] something was sick." By his late teens, Braun had become a familiar face in tween programming, using his goofy boy-next-door appeal to book roles in Disney movies like Sky High and Princess Protection Program, which he co-starred in alongside Selena Gomez and Demi Lovato.

But unlike his co-stars, Braun stopped short of fully embracing life as a child actor on advice from a former director. "He was like, 'Go live life and go do kid stuff, because that's the best stuff you can pull from as an actor," he recalls. He left the East Coast for Occidental College in Los Angeles and immersed himself in studying math instead. "I think part of me wanted to accept that and go do the normal thing for a bit."

Though he briefly dreamed of going back to his boarding school and teaching algebra ("You know, to force [students] to like it, like a teacher did for me") Braun ultimately chose to dive back into acting and left Occidental after his sophomore year. Projects like the short-lived Freeform TV series adaptation of 10 Things I Hate About You and movies like The Perks of Being a Wallflower, How To Be Single, and Whiskey Tango Foxtrot followed, with Braun in roles with such memorable character names as "Ponytail Derek" and "Tall Brian."

On its face, a role like Cousin Greg — A.K.A "Greg the motherf*ckin' Egg" — could be considered similar. He's still That Guy who exists in the margins, so defined by a certain characteristic that it becomes shorthand for his personality — be he tall, a cousin, or the guy who will at some point regret having a ponytail. But Greg's power lies in the often clunky ways he wanders into the main action. It's his failures — his Boar on the Floor moments, so to speak — that allow him to consistently be underestimated. And sometimes, just sometimes, he can use that to his advantage. He's not quite the "little Machiavellian f*ck" his cousin Kendall declares him to be, but he's learning traditional and nontraditional skills to navigate the corporate ladder.

While it might not seem like there's a lot to learn from a glorified executive assistant who proudly proclaims that his purpose is to "keep the lattes flowing," Braun says he is, in fact, learning about himself by playing Greg. "I overthink a lot," he admits. "Like, Oh, I can't do that, that'll never happen. But I like that Greg just kind of steps into a room and goes for it, tries something, doesn't back down from it." He takes a sip of his Arnold Palmer. "That part of him is kind of inspiring, you know?"

His plan for this hiatus between shooting Succession Season 2 and the recently announced Season 3 is to really go for it, too. He's already wrapped filming on Zola, an adaptation of the viral tweet thread about the eponymous woman's trip to Florida with a sex worker named Jessica that goes awry, and is excited for the world to see the chinstrap beard he proudly grew for his role as Jessica's boyfriend Derrek ("I didn’t get a lot of looks then," he says. "Just like little looks, creeped out."). He wants to finish up the screenplay he's writing, which he told GQ was inspired by his love of the MTV reality dating show Are You The One? and his past dating experience, though he clams up when asked about what he admits is an intensely personal project.

Maybe he'll even get back to making music, which he describes in mathematical terms. (Guitar: "I just didn’t get it. Like the math of it didn’t make sense." But piano? "Piano is the same formula over and over.") He uploaded his last song to his SoundCloud six months ago, and if you're wondering what Cousin Greg's singing voice is like, the answer is surprisingly soulful. He seems simultaneously driven to make something of himself for himself, and also content to let the right opportunities — be it an interesting role or another interview with a journalist — come to him.

The check arrives in a thick leather casing, a reminder that our conversation is still, in fact, a transactional one. He apologetically acknowledges his half-drunk Arnold Palmer, as if the difference between a media company's survival or it going the way of Vaulter hinges on my expensing his single overpriced non-alcoholic drink at a hotel. Outside, the humid air greets us like a bear hug, unwanted but inevitable, and we go our separate ways. I look back for a moment, expecting to see his figure looming a head above the hordes of pedestrians, but he's somehow disappeared back into the crowd.