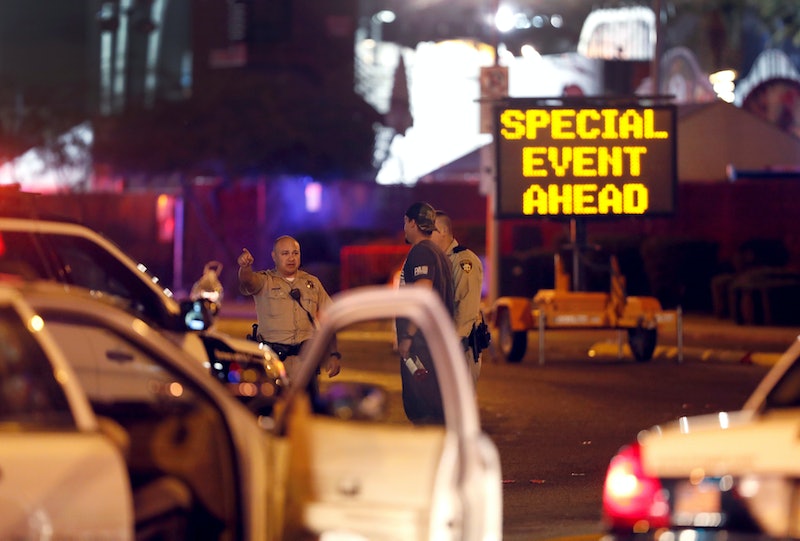 This is the worst mass shooting in US history, so we’re praying, we’re sending our thoughts and prayers to those affected, and we’re watching the breathless, sensational coverage that details the shooter’s every move before he opened fire.

You know, the old routine. We’re all Orlando. We’re all Virginia Tech. We’re all Las Vegas. And then, after that, nothing.

“I have a mass shooting story prewritten at all times, ready to be filled in with details as needed,” reporter Polly Mosendz wrote on Medium in 2015. “Mass death is prewritten in America.”

As a country, it seems we’ve reached the point where we now acknowledge mass shootings are a part of American life, because indeed they are — the gun-related murder rate in the US is 25 times higher than other developed countries, even when adjusted for population size. But that hasn’t spurred us toward any sustainable change. Our fundamental mistake is that we haven't figured out how to channel our sadness, our fear, our rage, and our frustration, into actual, concrete change. Instead, we wait and hope and pray as guns and mass shootings become even more routine.

“No one is immune. The gun lobby is actively pushing for guns in concerts and nightclubs and schools and churches. They want them everywhere,” Shannon Watts, the founder of Moms Demand Action for Gun Sense in America, tells Bustle. “If that’s not the America we want — and most people don’t — we have a choice to make [in the legislators we elect.]”

Watts, like many Americans, believes that breaking this cycle starts with sensible legislation that would serve to eliminate many of the loopholes that make it easy to buy guns in America.

In a New York Times op-ed, columnist Nick Kristof outlined a few of the gun control measures that he believes would be most effective, including imposing universal background checks (a measure supported by 4 out of 5 Americans), adopt the micro-stamping of gun cartridges, and investing in “smart gun” technologies. Kristof has written nearly identical stories at least three times before.

Unfortunately, Watts and Kristof’s call for change has gone unanswered. Since Congresswoman Gabrielle Giffords and 18 other people were shot in Arizona more than six years ago, more than 100 gun control proposals have been set before Congress. None have passed at the federal level.

“It is positively infuriating that my colleagues in Congress are so afraid of the gun industry that they pretend there aren't public policy responses to this epidemic,” Connecticut Senator Chris Murphy, who represents Sandy Hook, said in a statement on October 2. “It's time for Congress to get off its ass and do something." Murphy went on to call prayers and thoughts from many of his fellow politicians as “cruelly hollow.”

Speaking of thoughts and prayers, by early Monday afternoon, Twitter was flooded with #PrayersforVegas and Facebook was awash with friends lamenting about how sad and heartbroken they were.

“#ThoughtsandPrayers has become a huge joke on Twitter,” says Watts. “It’s great to pray, and then you do the same thing you’ve been doing that results in the death of dozens of Americans at a time. Those words are hollow.”

The media’s response to mass shootings also fits within a predictable pattern.

“The news breaks and journalists parachute in, go to the scene of the event, cover the event pretty intensely for a few days, and then coverage starts to drop off and is pretty much gone within a few weeks,” explains Nicole Dahmen, an associate professor at University of Oregon’s School of Journalism and Communication.

“Coverage is directly tied to the number of victims, deceased to injured,” Dahmen tells Bustle. “What we’re seeing now, over time, is that incidents now that have fewer victims quite frankly get almost no coverage. This is sadly a normalized situation that we have in the United States."

Dahmen says that for the media to be more efficient at covering these tragedies, newsrooms need to discuss these issues and work to brainstorm new models of coverage.

“We need to report on potential solutions: what is being done to help mitigate this issue from psychological, to mental health issues, to education, to preventative response, to gun safety,” she says.

Another model Dahmen strongly advocates for is called “restorative narrative.”

“Let’s give sustained coverage to these individuals, to these communities, and recognize that recovery does not happen overnight,” says Dahmen. “Recovery takes days, months, years. We’re talking about 400 injured victims, 59 people dead at this point. So, what is the reality of gun violence? What does it mean to recover from a gunshot wound?”

The government’s inaction to introduce gun control legislation puts us, as citizens, in a hard spot. If we can’t get our representatives to vote in our favor, what else are we left to do? And that’s where the seemingly never-ending thoughts, prayers, and hashtags start to roll in.

In our current political climate, we’ve begun to call our senators and state representatives at every turn, so why don’t we do the same for gun violence? As we pore over the same news reports, the same recycled tweets of Mr. Rogers quotes, it seems clear that the only way to change this endless cycle is to demand action from our lawmakers, but we should remember that we’ve been here before too.

“For the next few days, we’ll see many calls for change,” Mosendz wrote. “The temporary push for gun control in the wake of a shooting is part of the routine, too.”