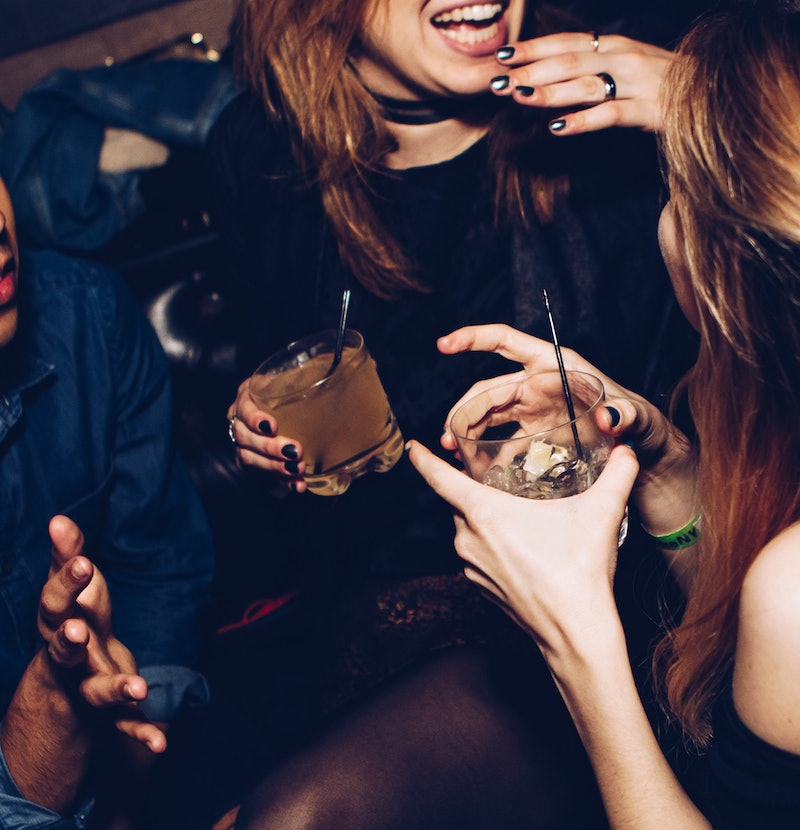 On Friday, the Department of Education, led by Education Secretary Betsy DeVos, announced it would be making significant changes to Obama-era Title IX guidelines, which penalized colleges for not aggressively investigating alleged sexual assaults, and placed the burden of proof on those accused of the assault, rather than the survivor.

The National Sexual Violence Resource Center reports that one in five U.S. women is sexually assaulted while in college, and now, with government resources and support for campus programs under attack, community efforts to step up the fight against rape culture and sexual are increasingly important. And those efforts are popping up in surprising places — including local college bars.

One such program, Raise the Bar — which is overseen by the University of Iowa's Rape Victim Advocacy Program — trains bar staff about the prevalence of sexual assault by educating them about how alcohol is often a factor in sexual assaults, the dynamics of sexual assault, and how alcohol-facilitated sexual assault occurs. Staff members are also taught how to recognize perpetrator motivations and red flags in a bar setting, and how people in each specific role (wait staff, doormen, bouncers) can respond.

"One of the things we understand in this work is how frequently perpetrators of sexual violence use alcohol as a weapon."

Raise the Bar is part of a larger trend of bars becoming more involved in customers’ safety. Signs posted in bathrooms instructing patrons to ask bartenders for an “angel shot” or to ask to speak to Angela if they feel unsafe and need help have become increasingly popular across the globe in the past two years. The Facebook group Bartenders Against Sexual Assault (BASA) has 4,000 bartender-members and counting. Some areas even have more organized bystander intervention programs for bar staff. Safe Bars — a safety initiative launched in the Washington, D.C. area that trains bar staff to identify and intervene in situations that appear potentially unsafe — has expanded to around 33 bars across DC, Massachusetts, and Arizona.

But Raise the Bar stands apart in its focus on campus sexual assault. “One of the things we understand in this work is how frequently perpetrators of sexual violence use alcohol as a weapon,” Adam Robinson, Executive Director at the University of Iowa’s RVAP, tells Bustle — and the statistics support it. The National Institute on Alcohol Abuse and Alcoholism reports that roughly 97,000 students have reported experiencing alcohol-related sexual assault, and a 2015 University of Iowa survey found that 21 percent of female undergraduates reported having been sexually assaulted, with more than 55 percent of those students reporting that either they or their attacker had consumed alcohol at the time of their assault.

Susan Junis, Assistant Director at RVAP, conceived of Raise the Bar in 2013, after attending the National Sexual Assault Conference; she launched it in 2014, the same year UI’s then-President, Sally Mason, commented that "human nature" was to blame for campus sexual assault at UI. After Junis trained the staff of local bar Bo James, other campus bars began to get in touch and ask to join the program.

“As a provider of alcohol on a campus, it’s such a problem, and you have the responsibility to help as much as you can,” Nick Carroll, general manager at campus bar Brothers Bar and Grill, which participates in Raise the Bar, tells Bustle. “As soon as I read the article [describing Raise the Bar], I brought my staff to do it.” he says. “Brothers’ [staff] is 50/50, male and female. The training helped provide a few different actions for staff members to take if they see a situation that looks dicey. It helped give them more confidence to interact and help out in situations.” Brothers’ male staff members, in particular, notes Carroll, began to show confidence and felt more empowered to assist women who needed help after the training.

Jason Zeman, owner of Studio 13, agrees with Carroll. His bar caters to Iowa city’s vibrant LGBTQ community, but serves a large number of college students of all orientations. “We believe it is our duty as a safe space and center of the GLBTQIA+ community to be diligent and take every opportunity for training that can help us address situations that impact the safety of our customers,” Zeman tells Bustle, “especially as we understand we are working with young adults and alcohol.”

Zeman says that it’s hard to know if bartenders are responding differently to threats now than they would have before the training, but he believes that Raise the Bar had a positive impact by giving staff better skills to identify indicators of sexual violence.

"She came back the next night to thank us, as she had met that male at a previous bar and didn't remember coming to Studio."

Zeman recalls how a bartender at his establishment, after undergoing Raise the Bar training, noticed something amiss and assisted a female customer. “Our door person and front bartender noticed the girl who had come with her had disappeared and the guy was acting strangely and was unable to answer basic questions about his ‘friend.'” he says, “Our bartender and door person made it clear to the male that we would take care of the female customer and we were going to get her medical attention. He left at that point. She came back the next night to thank us, as she had met that male at a previous bar and didn't remember coming to Studio.”

Since its launch in 2014, Raise the Bar has trained the staff at 10 Iowa City bars, and Junis tells Bustle that the university is now working with all Big Ten Universities in the Midwest to take Raise the Bar to all campuses. The University of Michigan, which adopted the program last year, says it has already trained 18 campus bars — with a total of 136 staff members — to identify and intervene in harmful behaviors of an unwanted sexual nature.

Though Raise the Bar is still fairly new, its results offer hope for both students and activists. A survey showed 59 percent of staff who underwent Raise The Bar training said the program increased their knowledge on how to intervene, and 48 percent said that they saw an increase in their own ability to tell when someone was receiving unwanted attention. An astounding 96 percent felt it was now their own responsibility to get involved in situations in which they saw someone receiving unwanted attention.

And individual bars report that the program has changed how the safety of their patrons is policed. Danielle Dros, coordinator for the Raise the Bar project, tells Bustle that at Good Time Charley’s, a Raise the Bar bar, bouncers now employ less direct or confrontational tactics when dealing with situations that could make patrons potentially unsafe.

Amy Marzulla, a licensed clinical social worker who conducts the Raise the Bar trainings with the University of Michigan, says that the program has helped address questions and misunderstandings around what sexual violence and consent looks like in bars.

“The nature of the problem is not black and white, there is a lot of gray,” she tells Bustle. She points out that the program has made especially significant progress in engaging men. “A lot of the response I get from men is them saying they want to create an environment that is safe and they want to be better informed because they care about these issues and want to know how to address it,” says Marzulla.

“Unfortunately, we have an administration that doesn’t value prevention work. It’s harmful.”

Raise the Bar also provides a thread of hope in an era where other sexual assault resources are being cut or undermined. In addition to changing how assault allegations are processed and prosecuted, DeVos’ announcement on Title IX and campus sexual assault will likely lead to a drop in federal and state funding for many college sexual assault programs, but in Iowa, many programs are already struggling.

In June, after the Iowa Attorney General’s Office eliminated funding for the statewide Iowa sexual abuse hotline and two other victim services, the RVAP was forced to turn to donations to keep the hotline active. This wasn’t enough. The imminent closure of the hotline — which has been functioning since 1999 and received 4,000 calls last year alone, and a 647 percent increase in volume since 2015 — will affect all 99 counties in Iowa. Junis tells Bustle that programs dealing with sexual assault prevention, as opposed to sexual assault response, are “often a really difficult thing to get funding for generally" because it takes a long time for its impact to be quantified: “We often don't see direct results from prevention programming for years after that programming is provided.” Because these outcomes aren’t always visible, she says, working in prevention requires programs to constantly find ways to improve efficacy and show more immediate results.

Marzulla worries that a rollback of protections offered under Title IX will cause a larger ripple effect in sexual assault preventative work around the country. “Unfortunately, we have an administration that doesn’t value prevention work. It’s harmful.”

Though it isn’t a substitute for hotlines or other programs where counselors and others with advanced training help survivors or other people concerned about sexual safety, Raise the Bar and programs like it are encouraging in the face of looming budget cuts. In an era in which governmental funding for sexual violence prevention programs may become more difficult to come by, Raise the Bar, and similar programs that are funded through private donations (rather than state or federal funding) are viable options as they cost less to run. According to Junis, operating Raise the Bar currently costs between $5,000 and $10,000 annually, and would cost around $30,000 if they hired a full-time staff member; in contrast, it costs $400,000 each year to run the hotline.

The team behind Raise the Bar at the University of Michigan says that program will continue to run as a steadfast community prevention program, regardless of any upcoming changes to government funding for sexual assault awareness programs. They already have plans to expand the program and include new partners. The project is now exploring plans to train transportation providers, like taxi services in Ann Arbor, to involve them in campus safety.

“This is not a university issue, state issue or a community issue. It is non-partisan. It’s pervasive everywhere,” says Marzulla. As the Trump administration continues to roll back rights and protections for citizens, it's fair to expect that dealing these non-partisan issues will fall more on citizens and communities, though one has to wonder if, without government intervention, it's more a band-aid that an actual solution.

More like this
'The Last Of Us' Video Game Revealed Tess’ Fate In The HBO Series
By Brad Witter
Learning To Love, Not Judge, The Lunchbox Wives Of TikTok
By Esther Zuckerman
How To Buy Perfume Online & Avoid Buyer’s Regret
By Simedar Jackson
Marianna Hewitt’s Advice For Building A Personal Brand
By Taylor Jean Stephan
Get Even More From Bustle — Sign Up For The Newsletter
From hair trends to relationship advice, our daily newsletter has everything you need to sound like a person who’s on TikTok, even if you aren’t.