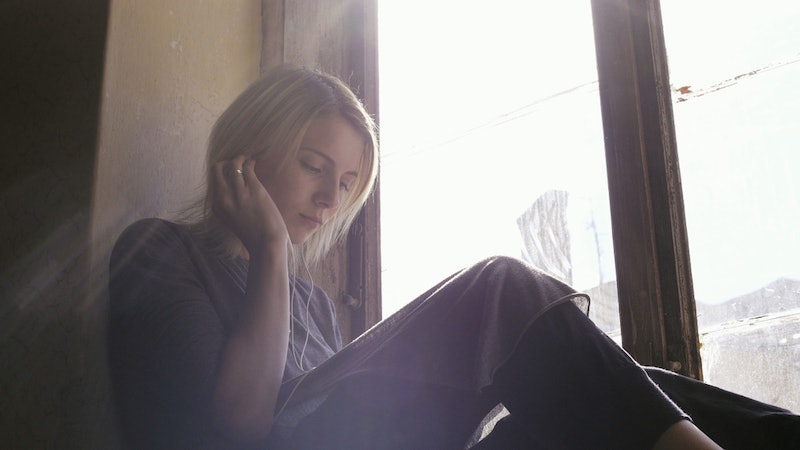 If you're on a traditional birth control pill cycle, involving three-ish weeks of active pills and one-ish week of non-active or sugar pills, it's likely you'll experience bleeding during that final week. You probably think of this as a "period," but newsflash: It's not actually menstrual bleeding at all. Instead, it's what's known as a "withdrawal bleed," and it's totally different from a period. Withdrawal bleeds can occur in all hormonal birth control methods, including the NuvaRing and the patch, that involve a week off from the hormonal delivery.

A quick recap: Your menstrual cycle is a continuous process lasting around 28 days, with four distinct phases, according to Planned Parenthood. The first is the bleed, which is where your uterus sheds its lining as a response to a dip in hormones. The second is the follicular phase, where your uterus builds up its endometrial lining to support a potentially fertilized egg. The third week is ovulation, where your body releases an egg for potential fertilization by sperm. (If you take hormonal birth control as directed, it prevents ovulation, so you will not release an egg.) And that last phase, the luteal phase, is where your egg follicles tell your uterus to prepare for an egg — which, if it is released but not fertilized, will leave your body during your period.

Withdrawal bleeds mimic periods, in that 1) blood is involved and 2) they occur because of shifts in hormones. "Much like a regular menstrual period, withdrawal bleeding is caused by a drop in hormone levels in the body. The drop in hormones triggers the release of some blood and mucus from the lining of the uterus out through the vagina," Healthline notes. The difference is that this drop in hormones is due to not actively taking birth control.

Withdrawal bleeds tend to be lighter than period bleeding when you're not on birth control. This, explained period tracker app Clue, has to do with two factors. "The pill prevents your endometrium from growing thicker, as it would in a typical menstrual cycle. It also prevents ovulation, and the typical cycling of reproductive hormones." Those two elements mean that bleeding during the "breaks" in taking the pill are commonly less intense than you'll have seen in your non-birth control years. Your uterine lining stays very thin throughout your cycle when you're on hormonal birth control, preventing pregnancy, and doesn't actually need to be shed at all. (This is also why people who take birth control may ultimately stop having periods altogether, even if they're not pregnant, Flo Period Tracker explains.)

Does a withdrawal bleed mean you're not pregnant? It tends to indicate it — but not for the same reasons as a period does. (A reminder that if you take your birth control as directed, you have an over 99 percent chance of not getting pregnant, but if you think you might be pregnant, you can always take a test to be sure.) For this reason, it's worth the reminder that experiencing a withdrawal bleed isn't actually medically necessary at all.

"Monthly withdrawal bleeds in any form are unnecessary and often inconvenient," wrote scientists in the European Journal of Contraception & Reproductive Health Care in 2016 — and that's now a widespread belief. If you like having a monthly bleed, that's completely your right — but it's totally fine to take active pills or hormonal birth control through the whole month and not have a 'break' with withdrawal bleeding, if that suits you. "Some people who choose to skip their withdrawal bleeds experience a decrease in menstrual cramps and premenstrual symptoms. Skipping your bleed may also improve other menstruation-associated symptoms, including: menstrual headaches, genital irritation, tiredness, and bloating," noted Clue.

Withdrawal bleeds aren't the same as periods, but they're still a reaction to important shifts in your hormones. If you notice your withdrawal bleeds have shifted, are getting heavier or have disappeared, it's a good idea to talk to your doctor or gynecologist about your birth control.