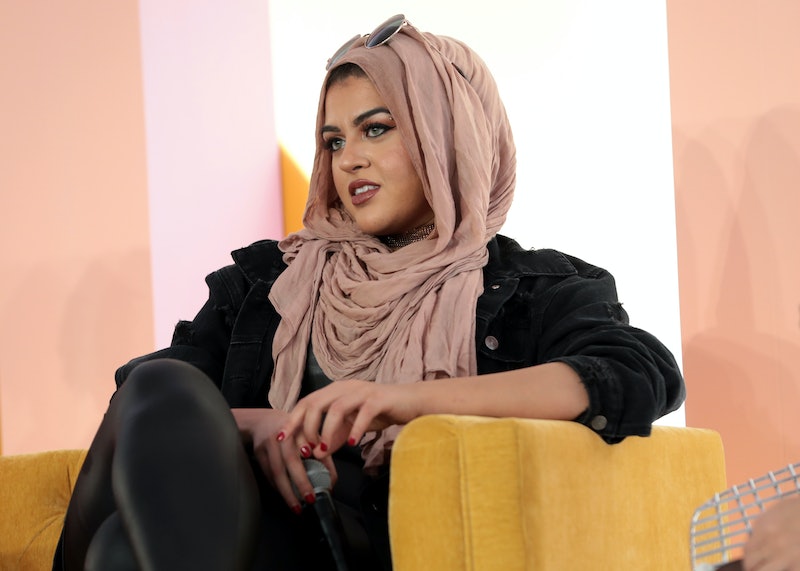 Right after I graduated college a couple of years ago, I made a pledge to myself that when I'm through with my work, no one is going to look at Muslim women the same way again. I started MuslimGirl.com, the world’s leading platform for Muslim Women voices, when I was a teenager in high school, and I did so out of frustration of feeling like I was always being spoken on behalf of but was never passed the mic. People say Muslim women are voiceless, that we’re silent or oppressed, and when I think about reclaiming our narrative, I can’t think of a better person than Khadija.

Khadija was always that figure who reaffirmed to me that I can do this on my own. I can stand on my own two feet. I can be independent. I don’t have to depend on a man in my life for anything. I don’t say this to be like, “I don’t need a man.” I’m saying that as a woman, I am equipped with everything that I need inside of myself to be able to actualize the life and the reality that I want.

Islam as we know it today wouldn't have existed without Khadija. She was the first wife of Prophet Muhammad (peace be upon him) and just a total badass in every sense of the word. She was a renowned tribal leader and a very successful businesswoman, and she hired him to start working for her. That’s how the relationship began — he wasn't even a prophet when she first met him.

Prophet Muhammad was an uneducated man. He didn't even know how to read or write before he became the messenger. The reason she decided to marry him was because, as lowly as he was in society at that time, he had a reputation for being an honest man, and she really appreciated that in his character. She proposed to him, and of course the prophet was in love with her, and obviously took her up on that offer.

When Islam was first revealed to the prophet, he didn’t know what in the world he had encountered, what was just thrust upon him. The first person he ran to was Khadija, and she’s the one who took him in her arms and said, “Look, you're a prophet, you were chosen.” She became the first Muslim, which is something not many people know. She was the first person to enter the faith, and she did so with so much pride, confidence, and also support for her spouse. She set a precedent for Islam and the role of women in Islam, and that's why she is seen as an example of what it means to be this multidimensional, multifaceted, revered Muslim woman. It’s why she is still such a source of inspiration for so many Muslim women around the world.

Khadija is the perfect example of how Islam intended to exalt women.

One thing we always say on MuslimGirl.com is that Islam is feminist, and the reason why is that Islam laid the groundwork for gender equality in society 1,400 years ago, with the work Prophet Muhammad and Khadija did together.

Even by today’s standards, the life that she lived is not only feminist AF but so supremely badass. She lived with a level of success, confidence, and certainty in herself and her womanhood that I think is aspirational even today. There are many foremothers in Islam, but for me, Khadija is the one I’ve always most personally identified with. She made me feel like it’s OK to be the breadwinner, the one that is successful and has her shit together and is running things.

The motivation behind MuslimGirl.com was to create a space for Muslim women to have the conversations that impact us in our lives on our own terms and to reclaim our narrative. It always felt like people were always talking about Muslim women, but it was never Muslim women doing the talking, and as a result of that, there was a lot of misinformation and misrepresentation.

As Muslim women, we have to deal with sexism from every corner of society, from outside of the Muslim community and from inside of it as well. Khadija is the perfect example of how Islam intended to exalt women. The prophet’s treatment of Khadija, his elevation of her, and his respect for her was divinely guided as an example for the many generations of Muslims that would come after them.