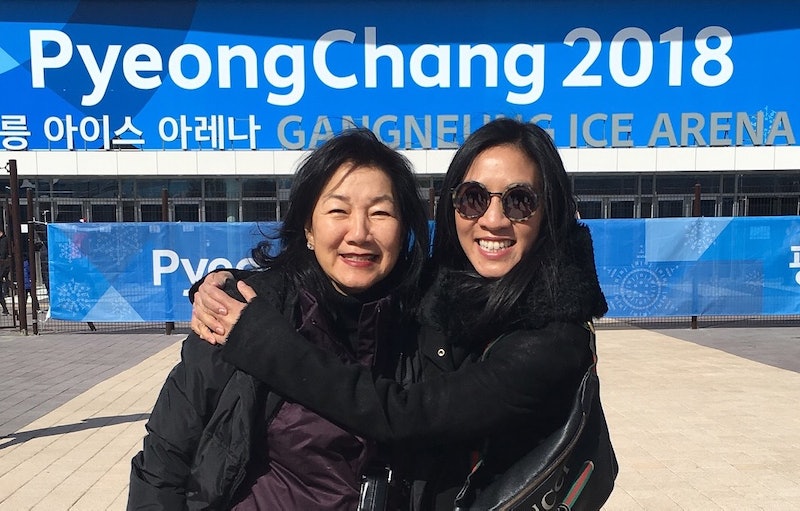 My mom — I call her Mamacita, Mama Kwan — was there from my first skating competition at the age of 7 to the day I finished traveling and competing. We did everything together, traveled the world together. We were on the same bus, in the same hotel rooms. I was on tour for 14 years, and every show she was watching me skate. She made sure I kept my dreams in sight and that I put my best foot forward.

My parents’ immigration story is always a little bit foggy, but my dad moved to the United States before with his family, and then he came back to Hong Kong to bring my mom over and essentially propose at the same time. Coming to this country is a huge leap of faith, but the one thing my parents — especially my mom, Estella Kwan — taught me was: Don’t let other people put you in a box. You are who you are. Be strong, and be yourself.

You didn’t see a lot of Asian Americans and Pacific Islanders in ice skating back then. The sport is so expensive. Custom skates were like $1,000, lessons were even back then $60 per hour. But even when our family struggled to make ends meet, it was my mom and dad’s grit and determination that they were going to provide opportunities for me and my siblings that my parents didn’t have growing up. We broke through that idea that because you’re from a certain socioeconomic status, you can’t do XYZ.

She’s the backbone of my family.

I devoted 20 years of my life to skating, and post-skating, I was very much stereotyped as an athlete. Everyone assumes, "Oh, you’re a figure skater, that’s all you do." (Except once, when I was in my mid-20s. I was at a shopping center, and this young woman came up and said, “Where do I know you from? Your face looks so familiar.” I usually let them think about it and figure it out, but then she turned around and said, “I know! You did my nails!”)

I’m always going to be tied to the figure skating world or the Olympics. Of course people don’t know I went to grad school. They don't follow you once you’re not on television or in magazines.

It’s taken some time to be taken seriously instead of people at meetings being like, “Hey, let’s take a pic, my daughter loves ice skating.”

Professional athletes have to do a lot of soul searching and find the other passions in their lives. For me, it was going back to school and traveling as an envoy on behalf of the State Department. That interest in diplomacy and international relations prompted me to continue my education, get my master’s degree, and then work at the State Department and get into politics. Now I’m an entrepreneur. I own two ice rinks in Los Angeles. I’m on the Special Olympics International Board of Directors.

In all that time, my relationship with my mom actually hasn’t changed much since I was a kid. She's somebody that I reach out to if something’s bothering or worrying me. When things are really difficult, my mom is that person who doesn’t flinch. It would have been so easy when I was skating for my parents to say, “It's time to quit and move on to something we can afford.” But my parents aren't those types of people. They're like, “If you want to do it, let’s do it.”

My mom would stay up every night for a week while she’s juggling two jobs, and sewing these sequins on one by one by one to put a costume together for me. I remember waking up and seeing her doing this in the middle of the night and just being so thankful. She’s the backbone of my family.

This is my story. It’s the story of the American dream, trying to build a better life, find happiness, put a roof over our head, work hard, play by the rules, and be able to make it. I don't think my parents really saw me as going to the Olympics and making it a career. I think they had anticipations of it helping me get a college scholarship, because they couldn’t afford three kids in college.

Grateful is just not even the right word for what I feel about what my mom did for me. She is the type of person that will give everything away to you to make your life a little bit better, or make you a little bit happier. She has a "whatever you want, we can help you get there" kind of mentality. Without my mother, I wouldn’t be the person I am.