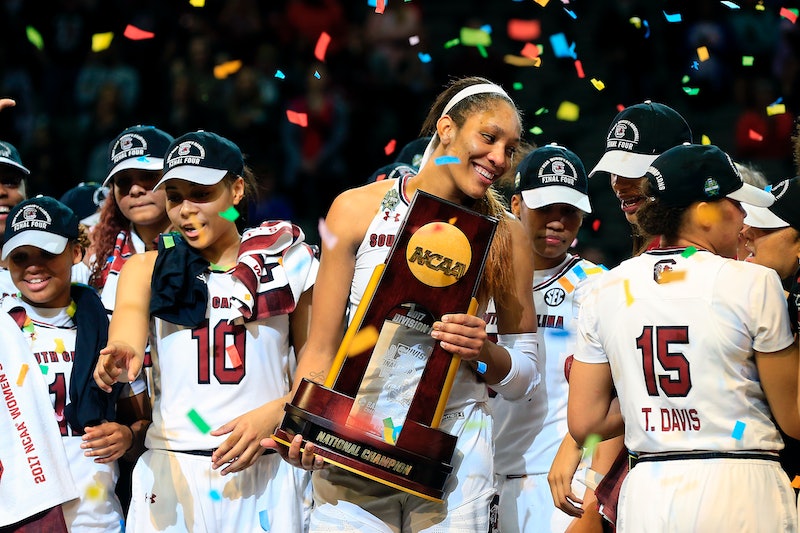 A'ja Wilson may only be 22 years old, but she certainly has a long list of achievements, both on and off the court. But when it comes down to it, the Las Vegas Aces player is really just a 20-something navigating through life, one step at a time.

And while Wilson has been playing basketball for years — she played in college at the University of South Carolina — this past season was her first one playing professionally in the WNBA.

When she was awarded the prestigious WNBA Rookie of the Year Award in August, Wilson was sure to remain grounded and grateful for all the women who came before her, along with the ones that inspire her on a daily basis.

"Winning Rookie of the Year was definitely really special because it was very unexpected for me, honestly," Wilson tells Bustle. "Coming into the league, I was very nervous. I didn't know what to expect. There was a lot of pressure, because you know, number one draft pick. Everyone wants to know, 'Well, is she that good? Or was it just college?' 'Can she be in the pros?'"

Wilson is certainly proving anyone who doubted her wrong, and is hustling her way to the top. Currently, Wilson is in China playing in its professional league until January, until the WNBA season kicks off again in the States. And despite the cultural adjustment and transition, she keeps powering through.

"China's a whole different culture, a whole different language," Wilson says. "And I'm like, 'I don't know how I'm gonna do this, it's tough out here.' But just in the back of my mind, I have to keep saying to myself, 'You know, you gotta keep pushing through, keep going'."

As she continues to amp up her game in China, Wilson has also recently signed a major endorsement deal with Mountain Dew, making her the brand's first female basketball ambassador. As a Mountain Dew endorser, Wilson hopes to gain a new fanbase of people, while also expanding her and Mountain Dew's brand.

"Mountain Dew really captures my personality and you can't find a lot of brands that focus on that side," she says. "And they know how to have a good time, and they know how to really bring out this different side of us, rather than just the athletic side."

Wilson is often praised for her outspoken, down-to-earth personality, which is why it came at no surprise that she has been open about the need for equal pay between male and female athletes, specifically within basketball. Back in July, Wilson made headlines for a tweet she posted about LeBron James' $154 million contract.

But according to Wilson, she's always been raised to speak up for what's right. "Honestly, I think it's just the type of person that I am," she says. "I think that it's just who I am, my parents really raised me in a way to not hold my tongue. I try ... not step on anybody's toes, just really saying what's on my mind."

Wilson also says she didn't think the tweet would end up blowing up and gaining so much traction, but she's glad it did. "I think it's opened up a lot of eyes to a lot of different people. And I think that really kind of helps create a voice for a lot of us," she says.

As a result, Wilson's mentions were flooded with support from her coaches, fans, and even fellow players, including WNBA All Star Skylar Diggins-Smith.

And although Wilson works tirelessly both on and off the court, she also knows when it's time to step back and practice some self-care. For her, that means going to movies. "I think that is something that helps keep me sane," she says.

Wilson also relies on her family, friends, and boyfriend to help keep her balanced and grounded. "You just always gotta have those people in your courts that you can just talk to about anything and not keep anything bottled up," Wilson says.

And as for her killer confidence? Wilson credits her parents and her late grandmother. Wilson believes staying true to herself each day, is crucial, no matter how hard things may get.

However, her confidence wasn't always as rock-solid as it is now. When asked what she'd tell other girls who struggle with confidence, Wilson advises them to "block out the noise."

And while Wilson is only 22 years old, she certainly has big plans and a bright future ahead of her as she revolutionizes female athletics — and shatters glass ceilings.

More like this
Twitter Is Saying The Same Thing About Roger Federer’s Retirement From Tennis
By El Hunt
Black Women's Equal Pay Day Highlights An Upsetting Problem
By Brandi Neal
This Psychological Effect Might Be Keeping You From Hitting Your Goals
By Lexi Inks
Why Harry Styles & Olivia Wilde Make A Great Couple, According To Astrology
By Nina Kahn
Get Even More From Bustle — Sign Up For The Newsletter