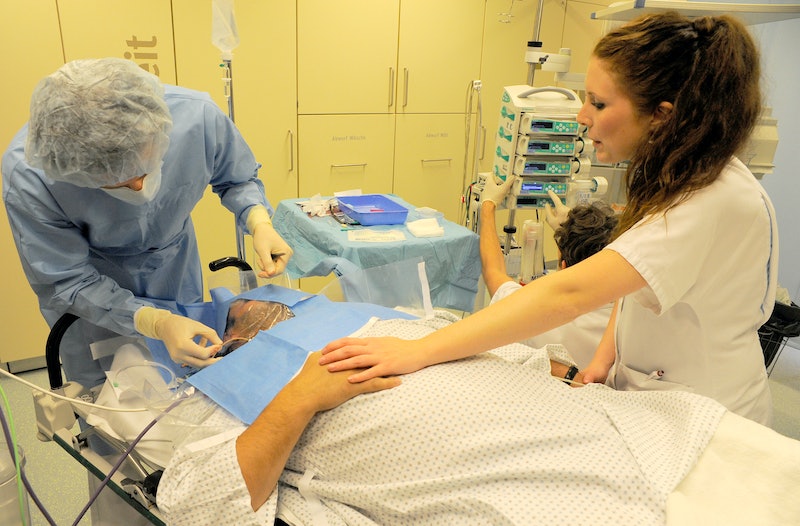 It's known that cardiovacular disease lies behind 1 in 3 women's deaths in the U.S. every year. And according to new research published this week in the Journal of the American Heart Association, women are much more likely to die in the year after a heart attack than a man in the same position. And it's not because women's hearts are somehow weaker, or we're biologically less capable of getting over serious cardiac events: It's because medical professionals aren't giving us the same kind of care that's given to men — and that's leaving women dying unnecessarily, even in the most medically advanced nations on Earth.

Women, particularly young women under 50 with no other history of heart disease, are the most vulnerable population for a particular type of heart attack called spontaneous coronary artery dissection. It's chronically misdiagnosed, and not just because its symptoms are unusual; people don't usually believe that young, health women can have heart attacks. So the new study, which used the data of 180,368 patients who suffered a heart attack from 2003 to 2013 in Sweden, is relevant even for women who consider themselves the least likely to experience a heart attack.

According to the Swedish data, female heart attack patients were three times more likely to die in the 12 months after their attack than male patients, and the reason seemed to be directly related to the treatment they were getting. Typical treatment for heart attacks that develop because coronary arteries are blocked includes surgery: bypass procedures and inserting stents are the most common procedures. Women with those kinds of attacks, however, were 34 percent less likely to have this surgical intervention than men. And all female heart attack sufferers were 24 less likely to receive the preventative medication statins and 16 percent less likely to get the blood thinner aspirin. When the women did get all the same care as men, the mortality gap closed entirely. Sweden has one of the best healthcare systems in the world — so how could women be so drastically failed?

Part of the problem may have to do with medical professionals not taking women's heart attacks "seriously." All the women in the study had actually cleared the first serious hurdle for female cardiac events: misdiagnosis, which is over seven times more likely for women than men, according to a 2000 study. It's still not widely known in the general population that, for women, the 'classic' heart attacks symptoms, including pain in the chest, don't necessarily apply. The National Coalition For Women With Heart Disease explains that heart attack symptoms, for women, can include things like nausea, abdominal pain, fatigue, and cold sweats, and that experiencing any of those at once is a medical emergency that could indicate a cardiac event. Medical professionals are supposed to be more trained to pick up these signals, but the British Heart Foundation, in a study by the same team that conducted this latest research, has found that as many as 50 percent of women receive the wrong diagnosis immediately following a heart attack. Vidhi Doshi, writing in The Atlantic, points out that in part this is due to sexist ideas about the 'typical' heart attack sufferer that date back to the 1800s:

In the late 19th century, the influential Canadian physician William Osler challenged this idea, arguing that heart disease was caused by stress, not anger. The typical heart patient, he believed, was a “keen and ambitious man, the indicator of whose engine is always ‘full speed ahead’” — a “well ‘set’ man from 45-55 years of age, with a military bearing, iron-gray hair, and a florid complexion.” For Osler, heart disease was almost a badge of honor, the mark of a hardworking capitalist man. For the next 100 years or so after Osler’s writing, that was the image that stuck.

The women in the Swedish study had been recognized as heart attack patients, but their care was still substandard compared to men's. It's not known yet why this discrepancy exists, but it's worth noting that the biggest gap in treatment revolves around surgery. It's possible, given the background evidence on heart attacks in women, that Swedish surgeons were making decisions not to operate based on the judgement that women's heart problems weren't serious enough to take such a step, or to deserve continuing care like medication. It's also possible, as a study on the low rates of a procedure called arthroplasty on women revealed in 2000, that women were refusing surgery because they don't want to be a "burden" on those around them. The actual reasons won't be known without further study, but the statistics tell a pretty alarming story.

The takeaway from this: if you're having symptoms that seem to qualify as a heart attack, even if you're young and healthy, get them checked immediately, don't take no for an answer, and be prepared to push for treatment afterwards. Closing the mortality gap purely by getting the same care as male patients is an absurdly simple step, but it needs to start happening.

More like this
The UK Abortion Laws In 2022, Explained
By Sophie McEvoy
6 Abortion Advocates To Follow On TikTok
By Sara Youngblood Gregory
How To Protect Your Digital Privacy If You Need An Abortion Post-Roe
By Kaitlyn Wylde
How Getting An Abortion Has Changed From The ’60s Through Today
By Amanda Chatel
Get Even More From Bustle — Sign Up For The Newsletter