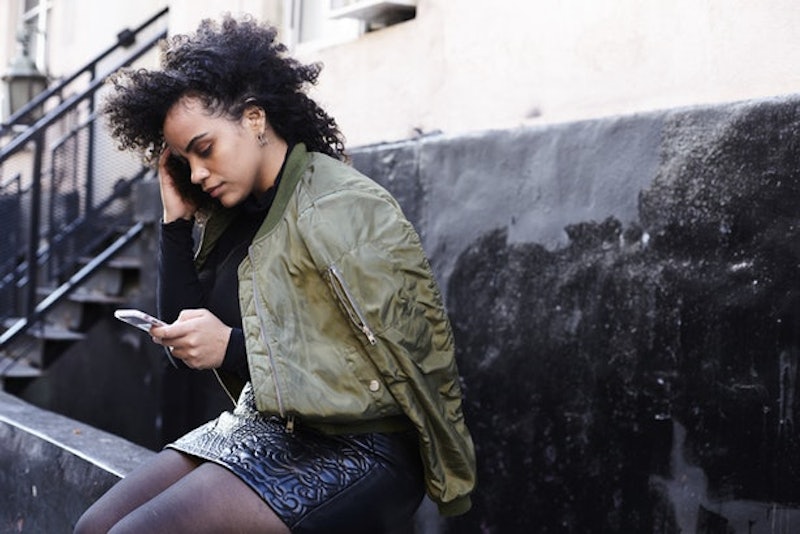 Now that it's 2018, we've gotten used to ghosting, aka pulling the disappearing act to break things off with someone, as an unfortunate but all-too-present part of dating. And when we wonder why people ghost, we normally reach to easy answers. We tell ourselves that they're scared or lazy or that all this technology we're using is ruining us. But it may be a little more complicated than that.

New data from CreditLoan, a financial advice site, found that women were more than 150 percent more likely to ghost than men were. CreditLoan asked 1,136 adults of different ages and sexual orientations about their dating habits. Though ghosting had happened to over a third of people, there were a lot of big differences in how men and women ended relationships — and women were far more likely to ghost. What was really interesting is that we often think of ghosting as an example of millennials just being trash, but that really wasn't the case. The gender divide was much larger than the generation divide. In fact, millennials, Generation Xers, and Baby Boomers all ghosted with very similar frequency. The real difference was between men and women.

Why are women more likely to ghost? So many people are quick to write ghosting off as being cowardly behavior, but it can also be that the decision to ghost is informed by larger gender norms. Women often find it more difficult to be confrontational than men — not because we're cowards, but because, basically, society tells us to keep our mouth shut and not to upset anyone.

"Women have definitely been socialized to be pleasing and deferential to men," relationship therapist Aimee Hartstein, LCSW tells Bustle. "They often want to be liked and can even have a tendency to tell people what they want to hear. This has resulted in them having a much harder time asking for what they want sexually as well as even just saying 'no' when they mean no. So it definitely stands to reason that some woman will be drawn to take the easy way out and ghost the dates that they no longer want to see. If you have trouble telling people what they don’t want to hear then it’s going to be pretty tough to tell them you no longer want to date them!"

So often, women are trained not to embarrass anyone else, not to make anyone else feel uncomfortable — especially men. Society says that we should smile, even when someone is creepy or aggressive. It says that, no matter how uncomfortable we feel, we need to protect those fragile masculine egos. So, when it comes to heterosexual dating, things become really complicated. In a society where as women, we're told to always be grateful for every scrap of male attention, it can still feel uncomfortable turning it down.

And if we feel awkward about politely refusing someone who harasses us for our number in a bar, it's a lot more complicated when it comes to telling someone we've gone out with a few times that we're no longer interested. We feel guilty that this person has invested energy, we worry that we've wasted their time — not to mention the fact that plenty of women are met with aggression or verbal abuse for politely refusing a man. Sure, ghosting someone isn't the dream, but it's easy to see how it happens, especially when women aren't trained with the vocabulary to assert themselves or refuse men (and men aren't trained to accept a woman's decision, either).

Even though we know it might not be the ideal thing to do in the long run, many of us are stuck, conflicted by an urge and duty to be upfront and a socialized obligation not to refuse men.

"I definitely resonate with our team's findings," Corie Colliton, creative strategist at CreditLoan, tells Bustle. "From a personal standpoint, sometimes it’s just easier to let things fizzle than to dive into an awkward exchange. Women might be more likely to want to avoid hurting a date’s feelings, but that’s often what happens anyway when you ghost someone. The truth can sting, but it can also help someone move on with closure."

Of course, many men will take a polite rejection well, but as women, we are not trained to reject, talk about our needs, or even think that our opinions should matter. So, sometimes, disappearing or fading away seems like the safest bet.

It's really no surprise that we're far more likely to ghost than men. In a society where we aren't taught to use their voice — and when we do it's not always respected — sometimes, we just won't use it.

More like this
Are Gemini & Leo Compatible In A Relationship?
By Kristine Fellizar
How Getting An Abortion Has Changed From The ’60s Through Today
By Amanda Chatel
35 Sexy Texts To Send Your Partner
By Griffin Wynne and Carolyn Steber
How To Tell If Your Partner Has A God Complex, According To Experts
By Madeline Howard
Get Even More From Bustle — Sign Up For The Newsletter